What is a good place to stay in Amed?

What is a good place to stay in Amed?

The area commonly referred to as Amed is actually a series of villages and bays looping along the northeast coast of Bali. Known for black-sand beaches, calm waters, fine snorkelling and impressive scenery, Amed forms a low-key counterpoint to the bustling yellow-sand surf beaches of southern Bali. With over a half-dozen beaches to choose from and plenty of places to stay, first-time visitors can find the selection a little daunting, so here are some pointers and our pick of the bunch.

First, let’s get orientated. The name Amed is actually that of the first village (when approaching from the west). It is followed by the villages of Jemeluk, Bunutan, Lipah, Lean, Selang, Banyuning and Aas. For the casual visitor little differentiates one village from another, but Jemeluk, Bunutan and Lipah are the three most popular areas, Amed is the cheapest and Aas is the least developed (and, located to the far east, the most remote). So many bays, so little time.

The best snorkelling is at Jemeluk, Selang and Banyuning. Banyuning is also home to the Japanese shipwreck (which can be both snorkelled and dived at). We’ve seen dolphins swim by a number of the bays in the early morning. All the bays are home to active fishing villages, so expect to share your strip of sand with a fair portion of the fishing fleet. There is ample opportunity to do a dawn boat trip on a fishing boat – the fishermen will find you. While some of the resorts clean the beach out front, not all do, and some flotsam on the beach remains, especially in the off season. 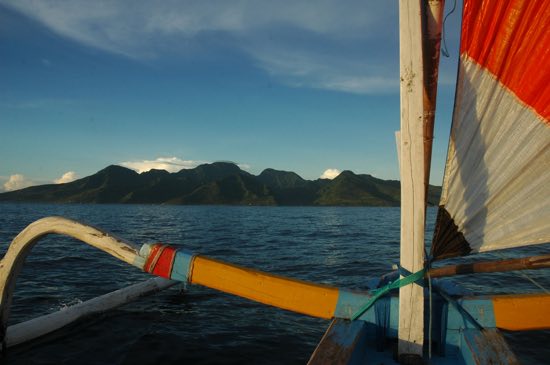 Amed is pretty from the ocean too.

Amed isn’t famed for its culinary scene and with good reason. You’ll find plenty of affordable seafood but actual seaside restaurants are few and far between — there are a handful in Amed and Jemeluk but precious few after that. Assuming you don’t have your own transport, you’ll end up doing a fair bit of eating in whichever bay you choose to stay at. There are a few standouts: Sails, Pantai Seafood, The Grill and Galanga spring to mind, but there are some truly awful places as well — we once scored a ball of deep-fried human hair in a plate of calamari. We’re not convinced fried eggs go best with gado gado, either. Lastly, the coffee, almost across the board, is vile.

Cheap places to stay around Amed
Before you base choosing a room solely on price, bear in mind that unless you have your own transport, it may be a bit of a false economy as you’ll need to rent wheels to get anywhere. Conventional wisdom holds that Amed has the cheapest rooms — but you’ll get equally cheap rooms at both Lipah and Jemeluk, so don’t make the mistake of not looking elsewhere. 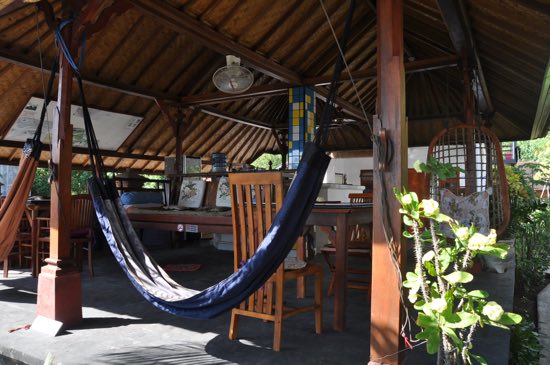 Pull up a pew at Lily Amed.

On Jemeluk, our favourite budget beachside bet is Warung Pantai Seafood (from 200,000) or Teman Teman (from 250,000). Off the beach, Kubuku is a steal at 150,000. Bunutan isn’t such a hotbed of budget shacks, but the abandoned-looking Sunshine will sort you out for 250,000. There are a clutch of places off the beach opposite Rising Star, starting with Warung Ary and finishing with Sinar Bali, but their high season prices (around 300,000) are really not competitive. Keep them in mind for low season though. 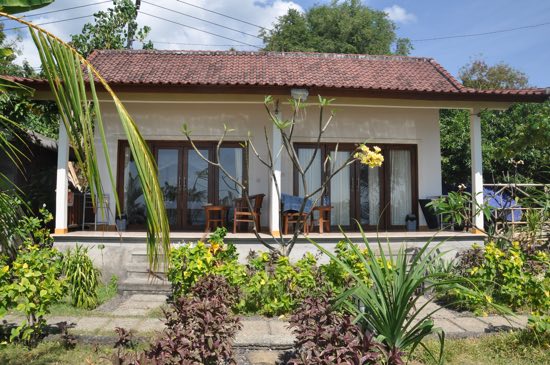 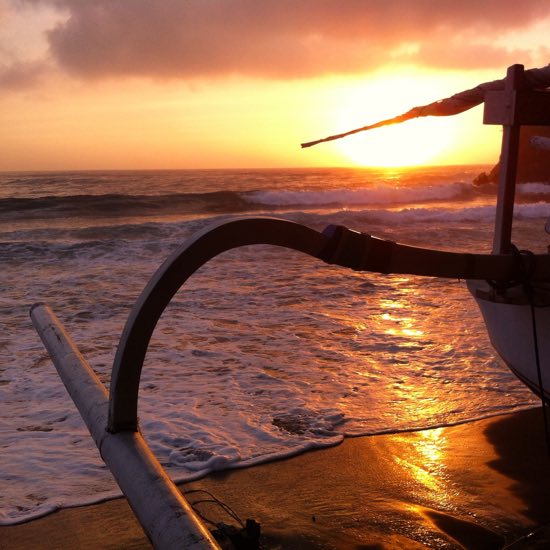 Lean is all mid-range and up, while Selang has Good Karma, which rents its older, smaller bungalows for 250,000. Further east you’ll struggle to get a bed for under 300,000. Way out at Aas, Meditasi is a good old school option at that price.

Flashpacker
If you’re able to spend a little more, you’ll get air-con and maybe a pool, but this price bracket tends to be a bit underserved in Amed, with what is on offer pretty old and clapped out. Nevertheless, here are some of our favourites. Kembali (from 650,000) has cute and clean cottages in a pool garden setting beachfront at the western end of Jemeluk. On Bunutan, Om Shanti offers similar standards (from 450,000) off the beach, while Rising Star may be old and dusty but remains a good seaside spot (from 450,000). The top rooms at Bedulu (from 685,000), close to Om Shanti, are also great and have a well placed pool. Wawa Wewe II finishes with the pool and the ocean.

A bit spendier
Casa de Amed (from 1,200,000) on Jemeluk offers smart, modern rooms in a beachside setting, while Santai (from US$87) on Bunutan offers a more traditional tilt with Sulawesi-style bungalows. Further down the same beach lies Apa Kabar (from 1,000,000) which will satisfy those looking for more creature comforts with the price to match. Down on Lipah you’ll find the palatial Villa Bukit Segara (from 1,200,000) which can be a great deal if you’re the only one staying there. Real resort style is best found at Palm Garden (from 1,000,000) on Lean. Chill out of Santai.

The special choices
In a sea of bungalows and cottages how does one stand out? Go for a memorable Japanese-themed room at the uber-friendly Pondok Laut (from 750,000) on Jemeluk or rent a complex of traditional Indonesian wooden houses at the lovely Kampung Villas (from 1,800,000, sleeps up to 10) on Bunutan. We still love the large beachside house at Life in Amed (US$325, sleeps 6 or so) which remains one of our favourite properties right across Bali. Your own little village at The Kampung.

Travelling familes
If you’re looking for enough space for a tribe, Villa Coral (family room from 900,000) at the eastern end of Jemeluk is great value. Off the beach in Lipah, Double One Villas II have bargain family rooms that will fit a cricket team in, with kitchenette and a dinky pool from 350,000. Other spots with loft-style sleeping include Pondok Laut (from 750,000), Apa Kabar (from 1,000,000) Wawa Wewe 2 (from 800,000), Life in Amed (from $70) and Good Karma (from 700,000). One Amed peculiarity is that the charges per child can be substantial, even though the extra beds are already there in the loft rooms. We definitely felt ripped off paying an extra 200,000 per child when breakfast was a fried egg and a piece of toast. 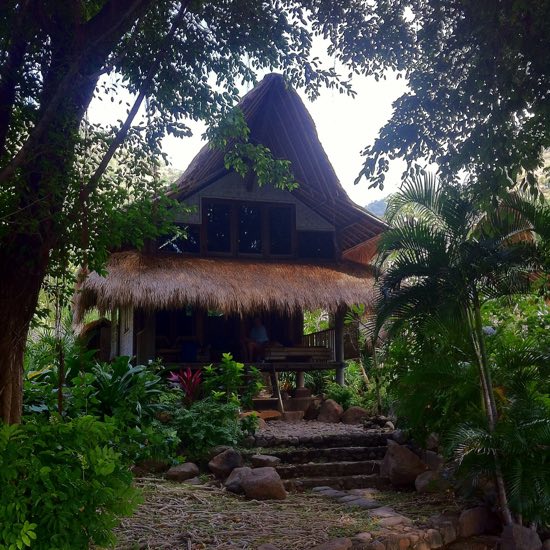 Our jungle shack at Good Karma.

Getting discounts in Amed
Amed has a very specific high season and all the above prices were gathered in high season. In June, July and August approximately three quarters of the breathing population of Marseille, Nice and Bordeaux descend upon Amed and rates jump accordingly. At any other time of the year, all rates should be considered highly negotiable. Off season we’ve had a US$130 room offered to us for 300,000 rupiah (just over $30 at the time), including breakfast and tax, without even pressing too hard for a discount. The best places won’t always budge on price, but if you’re heading to Amed in shoulder or especially low season, check online for competitive rates for Amed with Agoda and/or pick up the phone and make a few calls — you’ll be surprised just how much you’ll be able to slice off.

That said, in high season don’t expect any discounts at all and don’t be surprised if your first couple of choices are full.

Our top 10 places to stay in and around Amed

Get back to nature