A splurge when the owner is out of town

Villa Bukit Segara is a sprawling luxurious private villa just to the east of Wawa Wewe II. It is a private residence, but when the Dutch owner is out of town there are a selection of private guest rooms that can be rented on an individual basis.

The rates might seem high, but you may well have the entire complex to yourself, which makes this a far grander deal. This was the case when we breezed through — only one room was occupied, and the guests appeared to be well satisfied at having an entire villa complex to themselves for around 100 euros! 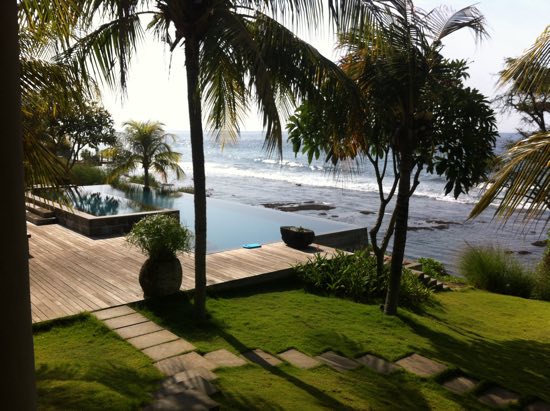 A couple of pool levels to choose from.

The room we were shown was built to a superior standard, with a walk-in wardrobe and a lovingly fitted out bathroom — the latter wasn’t much off the size of some bungalows we inspected elsewhere in Amed. Glass sliding doors can be left open to deliver cool sea breezes (though the rooms are air-con) and you can gaze straight out over the ocean from your bed. While the rooms are great, what really swings the deal here is the well-situated lawn, dominated by a very generously sized, split-level horizon pool, with a tremendous outlook over the ocean. To the left of the pool is a separate massage pavilion, with deckchair seating on a glass-enclosed pier jutting out over the ocean. A fully equipped kitchen and dining area is on-site, so there’s no need to leave the villa if you don’t wish too. The villa is reached via a winding driveway from the main road (you can’t miss it for the signage) which passes through the villa’s organic garden (home to at least one family of ducks). 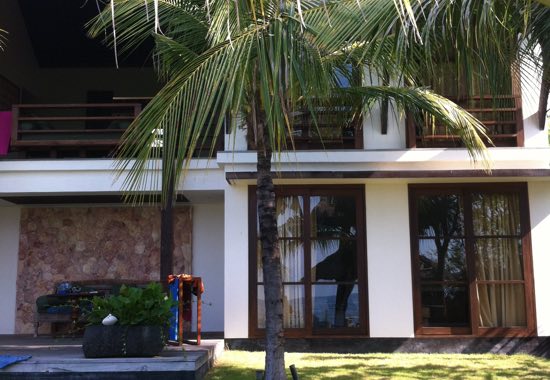 One of the guest rooms.

If you’re looking for a quiet hideaway, especially if travelling with a few people, grabbing a couple of rooms here can be quite a smart move — especially if you end up with the whole place to yourself. If you’d prefer something more traditional in styling, the Kampung Villas on Bunutan should be at the top of your list, but if you’re looking for a modern splurge, go for it!

Our top 10 places to stay in and around Amed

Get back to nature