If you’re looking to be ensconced in a bit of luxury in Bali, and you want to get away from the ridiculous crowds and gridlock of the crazy south, tasteful Alila Manggis on the often neglected east coast of Bali, about a two- to three-hour drive from the airport, is an excellent choice for a few days of blissful escape. I suppose it will do.

I’m often asked to suggest family-friendly Bali hotels that aren’t on the usual beat and offer something a bit different. The people asking aren’t on tight budgets — they’re often flying in elsewhere from the region for a long weekend or a week’s getaway — but they do want good value for their spend. After three one- to two-night stays in the past year or so at Alila Manggis, this is the standy-by I’m now recommending.

Let’s get the minor disappointments out of the way first. Alila Manggis doesn’t have a kids’ club, and the rooms are starting to look ever so slightly tired. While it’s oceanside, the beach is black rock and usually not swimmable. But it’s all upward from there.

Rooms are located in four two-storey buildings on sprawling lawn-and-coconut-palm grounds, loosely clustered around a square pool that’s great for kids who can already swim, as it’s shallow right around the edges — a four-year-old can just stand — and deep in the centre.

Standard rooms (around US$160 per night) are compact but functional. Located on the ground level, this is where we’d suggest staying if you have kids who can swim in tow, as they can run straight from your balcony down to the water. It’s really ideal — you can lounge here, or tap away on your computer on the dining table, while the kids come and go. 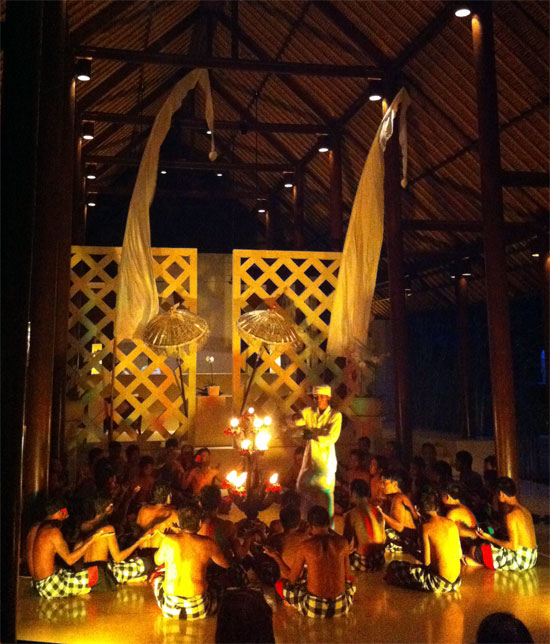 We’ve not stayed in the deluxe rooms upstairs, but the amenities in the standards are just fine. There’s no bath, but the walk-in shower works just fine, and the bed linen is suitably never-want-to-leave comfy. They’ll make up a kids’ bed on the banquette-style lounge, or wheel one in if you prefer. (We don’t so much like the 200,000 rupiah per night rental rate for a DVD player, considering how cheap they are to buy these days, so do bring your own miniplayer if this is a concern.)

Food at Alila is exceptional. Room rates includes breakfast, which is ordered a la carte and traverses Balinese and Western choices, such as delicious French toast with vanilla cream and snakefruit compote, and asparagus with poached egg, among an array of enticing options. The bread basket is so generous you’ll possibly be whisking it back to your room where it may well be enough for lunch as well. (Or lounge by the pool while having a to-order lunch.) Try to ask for your breakfast table to be set up in the coconut grove the night before — it’s worth it.

Then there’s afternoon tea, served from 15:00 to 17:00 near the pool, or during inclement weather, the lobby. A few Balinese sweets are offered along with Bali coffee and herbal tea — fresh lemongrass, cinnamon and ginger are among the selections. 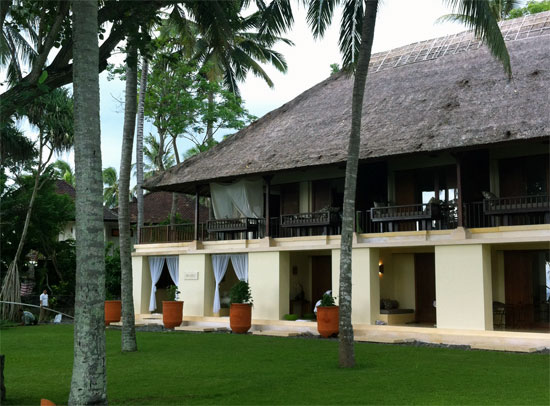 Spa to the left, normal rooms to the right.

Dinner options again cover Western and Balinese, with some lovely imaginative options — I can recommend the Balinese salads, as well as the pork belly. If you’re eating around sunset, again you can ask your dinner to be served in the coconut grove adjacent to the restaurant, which makes for a magical sunset as lanterns will be brought out.

While good value for the quality on offer, your meal bill is where your budget could be broken, so keep a close eye on your ordering — and especially if you do have kids in tow, perhaps bring snacks as you can always pop them in the bar fridge and nibble on them over the course of your stay. 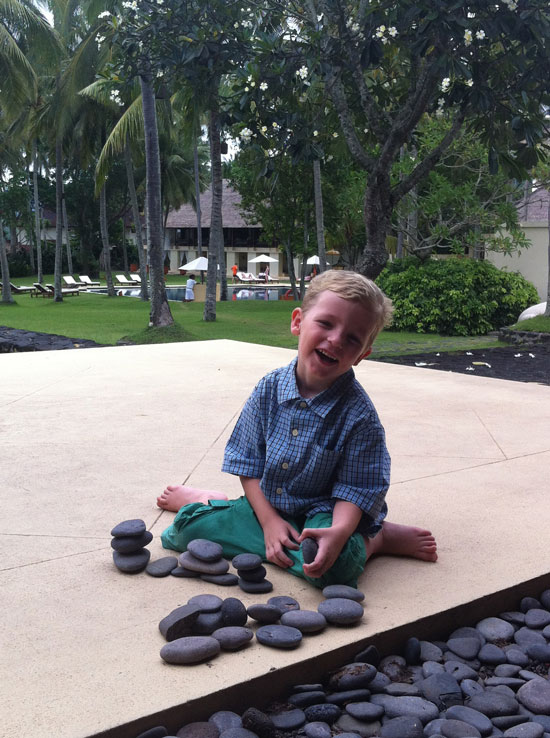 Though there’s no kids’ club, there are daily activities often suited to children, such as canang (offering) making. Cooking classes are held on site (or head up to Bali Asli if you feel like going further afield) while walks and bicycle trips are also on offer though we haven’t tried them. Cultural performances are also scheduled; our last visit included the kecak dance, which was held in the lobby as it was wet but remained impressive.

Service here is exceptional and prompt; we’ve always found requests for minor repairs (a jammed tap) and other items (like ice) met quickly.

All in all, if you are looking for a taste of Balinese serenity and you’ve got a budget for Alila, you can’t go past Manggis for some down time.

Our top 10 places to stay in and around Candi Dasa

Spacious and colourful with sea views