Located smack-bang in West Bali National Park, The Menjangan is spread across 382 hectares — yes, it’s massive — though the actual development covers a very modest area. If you’re looking for somewhere secluded and plush beachside in Bali that’s a bit different, you enjoy nature-based activities and your budget stretches to luxe, it may fit the bill. View of Menjangan Island from the tower.

Skip the older rooms built around a pool well off the beach and instead head directly for one of the bungalows built right on Sentigi beach. They’re connected by boardwalks presumably there to protect the surrounding mangrove as much as possible; the staff member who showed us around told us that national park workers regularly visit to ensure park rules are being followed. (How they managed to open in the first place, more than a decade ago, is anyone’s guess — new owners have since taken over and added the bungalows.) Just seven of them mean the beach is quiet, though people staying up at the other accommodation (still only 15 rooms) can come down to use the beachside facilities as well. The decor is tastefully minimalist, all sleek lines and white sheets, with the amenities you’d expect in this (high) price bracket. A semi-outdoor bathroom means you can soak in fresh seaside air; a veranda out front complete with bean bag and low-slung chairs means you can enjoy the beach without having to step in any pesky sand. 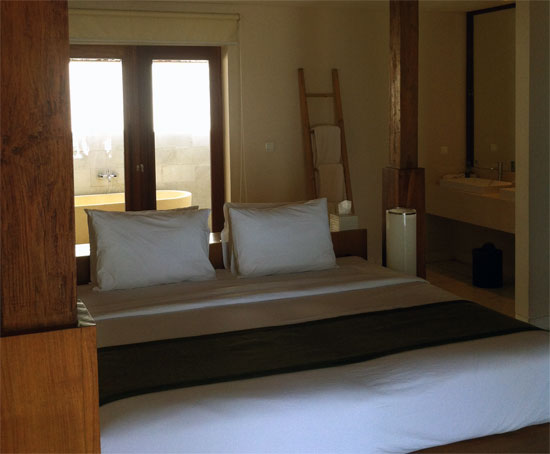 Though you can do that too, with sun loungers and tables and chairs both oceanside and set back a little closer to the restaurant as well. Note that verandas drop directly to the beach, with no railings — this isn’t a place to bring small kids. View from the veranda of one of the bungalows.

Beach bungalow users can similarly hop on over to the swimming pool inland — you can use a safari-style double-decker minibus to move around if you don’t feel like hiking in the heat. It’s basically a car with seats on the roof — swing on up, and you’ll see a lot more from here than you would in a car. You’ll be passing through drier terrain than what you’ve seen elsewhere in Bali; it’s more African savanna/Australian bush than classic Southeast Asian rainforest. The highlight of staying here would be a trip to nearby Menjangan Island, where the snorkelling and diving is probably the best on the island. You can also head out trekking — the park is home to deer, wild pigs, black and macaque monkeys and a wide range of birdlife, including the endangered Bali starling, one of whom happened to be home in one of the resort-built houses when we passed through. You can arrange trekking directly with the park if you’re keen. A Bali starling at home.

Dine down by the beach, or back up where the reception is, at the Bali Tower, a 28-metre high open-air wooden building that gives you fantastic 360-degree views of the surrounds, across Menjangan and to neighbouring Java, where plenty of volcanoes cooperate to give you some great photo ops. Even if you’re not staying here, stopping by for a meal is an option and we think the views make a detour worthwhile. Menjangan from the beachside restaurant.

The spa is beautifully located right on the water. We’ve inspected our fair share of spas on Bali and this is one of simpler but better ones we’ve stepped into. A spa with a view.

So the price? The best internet rate on their site for a bungalow is $325++ — Agoda.com is a little cheaper. While this plonks the Menjangan firmly in Bali’s high-end luxury category, if you’re after a splurge in a beach bungalow well away from the crowds in Bali, this could fit the bill. The older rooms in the poolside Monsoon Lodge go for $170++ but we’d go for the beachside ones — for the price of the Lodge rooms you can find better deals in Bali.

If The Menjangan is out of your budget, but you like the sound of the national park and Menjangan Island, we’d suggest staying in nearby Pemuteran instead and doing a snorkelling trip from there.

Our top 10 places to stay in and around Pemuteran

More than a homestay