We’ve stayed at Kanawa Beach Bungalows twice and have written, tweeted, Facebooked and Instagrammed about the island off Labuan Bajo in Flores more times than probably any single other place in all of Southeast Asia. Yet we have decidedly mixed feelings about it.

The simple fact is, Kanawa Island and its surrounds are so beautiful, and the house reef so wonderful, that it really wouldn’t matter how bad the restaurant and accommodation were, we’d still return. Here’s how to minimise your expectations so that you can get the most out of your stay on the island without going postal after one night and packing your bags for the nearby, and decidedly flasher (and more expensive) Komodo Island Resort.

Please see the end of this review for an important update Kanawa Island Resort has four main styles of accommodation: “deluxe bungalows”, “bungalows”, — I put these in quotes because the resort uses slightly different terminology. Electricity is available 18:00 to 23:00 (give or take) daily. 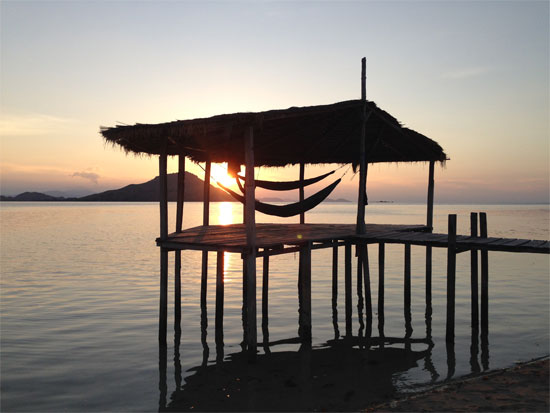 For when the bungalow gets too hot.

The deluxe bungalows come in two flavours — sunset and sunrise — respectively those to the left of the restaurant (when facing it) and those to the right. The ones to the left are the better ones as they have a larger enclosed veranda area and are better placed for sunset. Those to the right are in a couple of rows, have slightly smaller balconies and are handy for sunrise. All have open-air private bathrooms with grimy, in parts rotting, bamboo walls, dirty Ende pebbled floors and aged Western-style toilets with bucket flushes. Windows are small; there are no fans; all bungalows are getting rundown — some on the sunrise side were missing substantial parts of their roof at our most recent visit. Beds are draped in mosquito nets, but you’ll get so hot at night that you probably won’t want to use them. 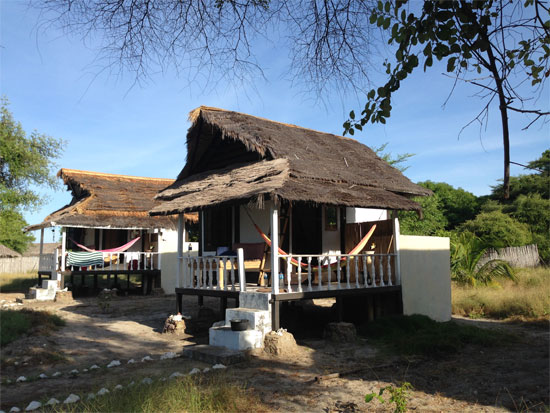 Bungalows, while having a lockable front door, are in no serious way secure. Windows often cannot be closed properly or locked and there are other elevated wall openings that a determined thief could climb into. To be fair though we’ve not heard of any reports of theft from here. 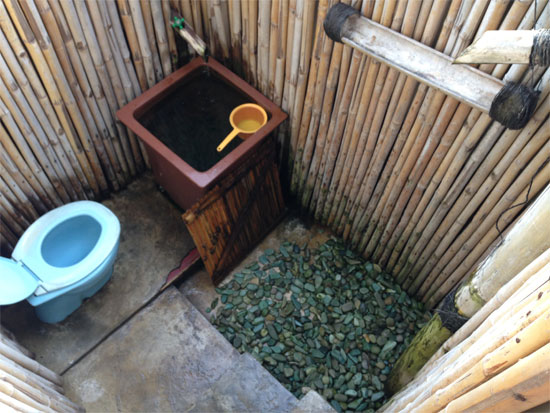 The bungalows have two main issues. The first is a lack of a fan at night — we slept many nights on the veranda daybed or in the hammock. Supplying simple fans and running the generator through till early in the morning would be an easy fix and given the rates they charge, there’s no reason why they shouldn’t do this. The second issue is maintenance. Some of the bungalows are in such poor shape that you’d probably need to start them over from scratch, but they’re only in this state in the first place because they have been so neglected. Larger windows, and in three sides of the bungalows, would be a great way of improving the quality of sleep at night. 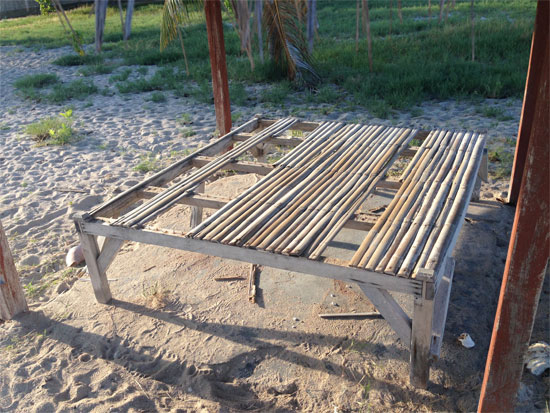 Watch where you sit.

A few salas dotted around the grounds offer potential spots for day time dozing, but they’re often in such a bad state of repair that they’re unsafe to use.

The restaurant, meanwhile, is a shambles. In a stay of over a week not once did we have an entire order for the four of us arrive together — on one occasion two pasta dishes ordered at the same time were TWO HOURS apart, delivered with no apology or even acknowledgement that this was out of the ordinary. Incorrect orders are routine. Given the setting, the standard of food is reasonable, it’s just the kitchen that has no idea about how to get food out. It’d be so simple to fix a few things — cold beer is better than warm for example — which sort of points to not so much incompetent staff, but rather a management failure. 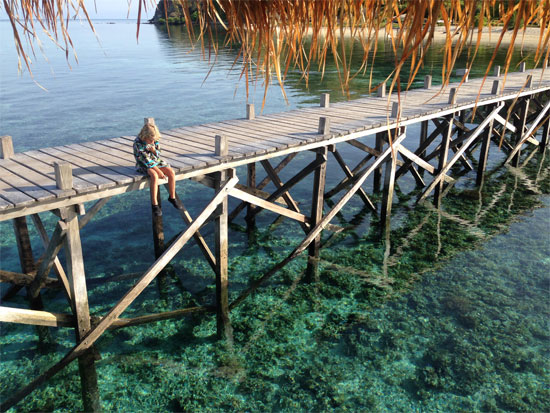 There’s nowhere else to eat on the island and the restaurant is closed outside meal times. Beers will be grudgingly handed over, but even for snacks, forget it. Return visitors (like us) arrive with cold packs full of snacks and munchables to keep us going through the afternoon and it’s a shame the resort doesn’t appear to be interested in satisfying this need. 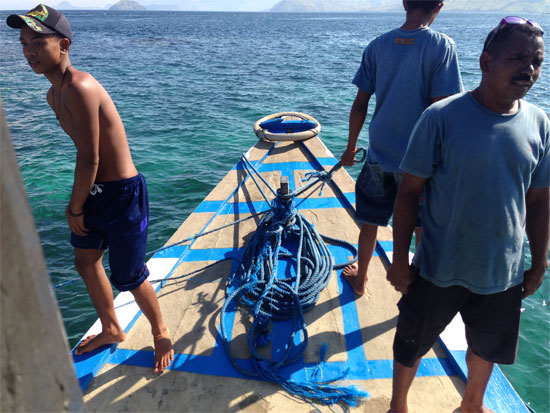 Everyone’s pulling in a different direction.

We found staff abrupt when we arrived, but they seemed to soften and get friendlier the longer we were there. 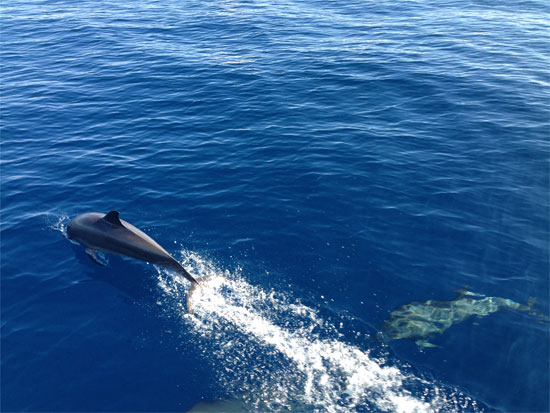 So why should you put up with all of the above? Put simply, the beach and immediate offshore reef are amazing. Even snorkellers can expect to regularly see turtles, reef sharks and tonnes of fish, including massive bumphead parrotfish. The coral is in pretty good condition. The beach is littered with shade trees and there is plenty of space for everyone to set up camp.

Kanawa has a triple peak at its centre that can be reached by a scrabbly dirt trail — watch your step, especially on the leg to the sunset peak. The views are fabulous, be it sunrise or sunset or even during the day. Everyone who visits Kanawa should make the climb at least once. It isn’t overly strenuous and can even kids can do it — though again, they should watch their step. 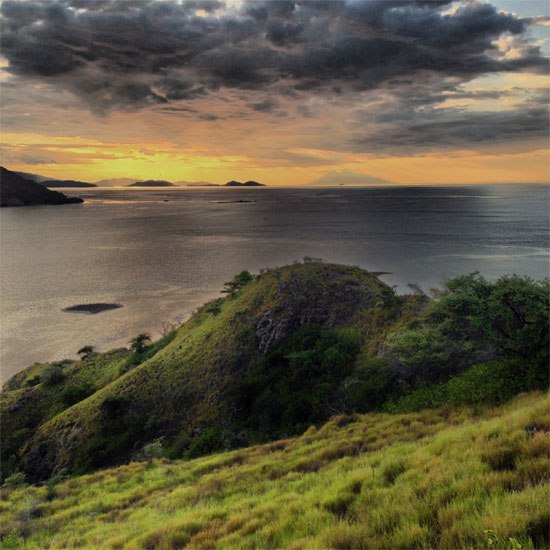 Give me a mountain song.

Kanawa runs a bunch of quite good value tours. Trips to Komodo, Rinca, Manta Point, the fishing village and a bat viewpoint are all on offer. Like everything else, organisation can be lacklustre: boats are available then suddenly not available, then just as suddenly available again. Beanbags which used to be taken on the tours are not anymore, because they “belong to the bar”, but the bar doesn’t open till 18:00, by which time the tours are mostly back. See “management issue”.

We were told Kanawa Island is privately owned by a group of Europeans and an Indonesian, and they’ve done some great work setting up solar power, running community projects and initiating reef preservation activities. We understand from various sources that the island is up for sale for anything from 3 to 5 million euros, depending on who we spoke to. None of the owners were on the island during our stay, but one assumes that trying to flip the island would explain some of the issues.

If it was sold, you could probably bid farewell to this as a flashpacker island as it would almost certainly move well into the high-end price bracket, which would be a great shame. It’s a double shame as some minor straightforward improvements to the accommodation and the restaurant would make it a truly great place to stay. 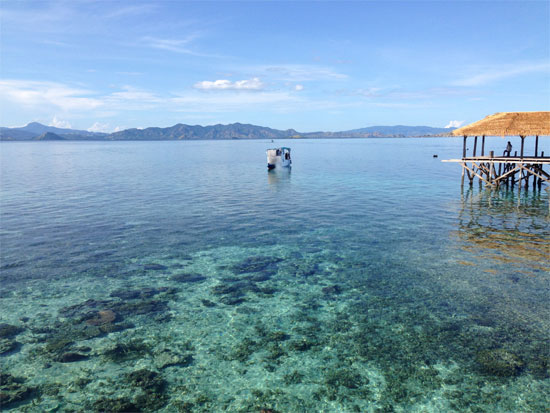 Turn your back on the resort though, and it is gorgeous.

Update
Since our last visit, Kanawa underwent some changes which included the removal of the diveshop and the bales. Prices were increased substantially and unreasonably (we've been told by travellers who have visited since the change).