High-end hotels aren’t hard to come by in Bangkok’s ritzy Siam Square shopping district, but most are run by corporate chains like Novotel, Four Seasons and Amari Watergate. The eight-year-old Siam@Siam Design Hotel bucks that trend while keeping up with the big names by offering an array of amenities in a luxurious and creative set-up. Apart from the weird email-sounding name, we found this place hard to fault.

The hotel boasts just over 200 rooms and several common areas on 26 floors, all decked out in a lot of deep maroons, violets and oranges that call to mind lava-spewing volcanoes, medieval Transylvania castles or the planet Jupiter’s explosive surface. Polished coppers, dark woods and no shortage of candles join the rough textures of abstract art for an atmosphere that’s somehow industrial and warm all at once. They seem to have confused the virtual world with the real one .

While some may find it a tad over the top, artsy folks are likely to appreciate the design as having a sort of “apocalyptic” or “neo-gothic” look. Lounging on a couch in the 11th floor lobby/internet cafe area, we felt as though the only thing missing was a tall glass of full-bodied cabernet sauvignon (don’t worry, we’ll get to the wine part soon). In both the rooms and common areas, the not-so-cheery colours are offset by wide windows that bathe interior spaces with light. 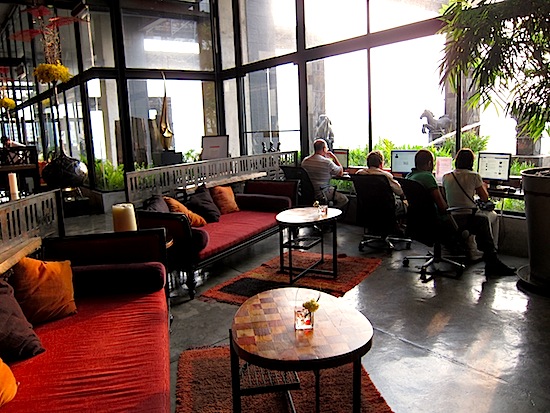 Is it cool if I just crash in the lobby?

All rooms feature the expected comforts for this price-range like air-con, safes, coffee-/tea-makers, fridges, minibars and WiFi. They also have TVs, but we appreciated how these are placed on walls off to the side rather than in the centre. Stylish modern bathrooms, dim lighting, deep red-orange curtains, soft carpets and the aforementioned works of art — which are supposed to convey the four elements of earth, water, air and fire — round out the cosy and creative rooms. Rooms have a hot and fiery feel — perfect for passionate couples we reckon.

The standard “leisure class” rooms offer adequate space at a rack rate of just over 5,000 baht while the largest and priciest “grand biz class” sleeps four and comes in at over 8,000 baht if acquiring the room as a walk-in. A couple of mid-sized rooms are also available. Staff told us that significant discounts are normally found on the hotel’s official website, but that the best rates are typically scored on booking sites like Agoda.com. Indeed, our search on Agoda revealed “leisure class” rooms for just over 3,000 baht per night — not too shabby indeed.

While the rooms are a good fit for those seeking comfort and a funkier, more youthful atmosphere than what’s offered by the usual high-end chain hotels, Siam@Siam really shines when it comes to the extras. The 11th and 12th floors are combined to form one of the more inviting lobby/lounge areas we’ve seen anywhere, and we loved how an attached infinity pool with soaring views of National Stadium and the southern Bangkok cityscape is perched in a relatively secluded setting off the building’s western side. 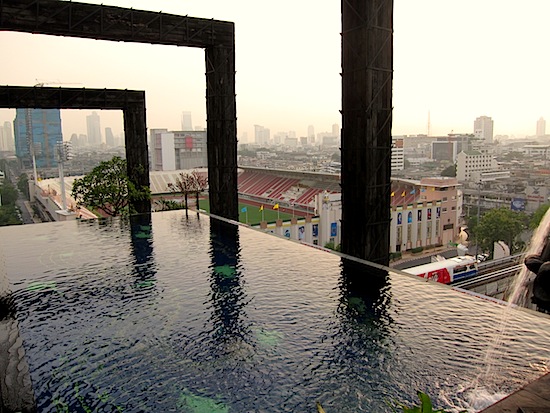 Bring binoculars and you could have poolside seats for a football match.

A full service spa and fitness centre with an ample supply of high quality equipment occupies the 10th floor. Even if staying elsewhere, “Spa Ten” appears to be an excellent choice for those seeking something more plush than your average 200 baht Thai massage. The hotel also offers an in-house tour service, baby sitting services and a similarly funky function room that would be a good fit for those more offbeat companies.

Yet perhaps the most notable aspect of Siam@Siam are its dining and drinking options, which rival even Bangkok’s largest high-end hotels. Choose from a healthy selection of varietals at MezzaWine Bar, then move down to the more happening Party House One on the ground floor for live DJs in the evening, cocktails and a range of Thai and international pub fare. Party House One: just one of many on-site dining/drinking choices.

If looking to impress, try La Vue European fine dining on the 25th floor, or gaze out on the twinkling lights of Bangkok from The Roof Restaurant’s open-air awning, where food is cooked on volcanic rocks heated to 400 degrees Celsius. If that’s not enough, settle into a separate poolside bar, tuck into a maki or two at Rainbow Roll sushi restaurant on the 11th floor, or pop a bottle of the bubbly at a separate champagne bar also on the roof.

Although you could easily spend a few perfectly happy days without ever leaving the premises, the hotel has a central location just a minute’s walk from the sky train and within walking distance (or one stop by train) to Siam Square. If preferring to skip the treadmill in favour of a jog outdoors, the public full-size tracks of the National Stadium complex are just across Rama I Road, and the historic Banglamphu area is a manageable three kilometres to the west. 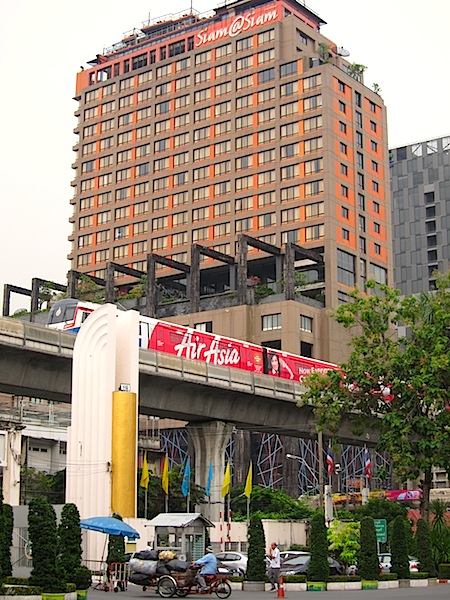 Can’t get much closer to the sky train than this.

Perhaps it’s needless to say at this point, but if we had a few thousand baht to spend on a hotel in Bangkok, Siam@Siam would make it onto a very short list of choices. Luxury-seekers might also check out nearby Hua Chang Heritage Hotel and, on the other side of Siam Square, Luxx XL Langsuan. For something cheaper but also with a pool, try the Happy 3, which is just up the street from Siam@Siam on Soi Kasem San 3.

Boxpackers Hostel and The Period Hotel