The tiny Siam Journey Guesthouse opened in 2011 and has become popular with creative types looking for a cheap bed somewhere other than Khao San Road. We were told the guesthouse “attracts a mix of party animals and bookworms” — it sounds strange but makes perfect sense once you see the place. It’s artsy, laidback and has a warm community vibe.

Although it’s an easy five-minute walk to Phaya Thai BTS station in central Bangkok, Siam Journey is hidden away down a sub-alley off the already nondescript Soi Nomchit. The guesthouse’s website admits that you’ll probably need to ask a local how to get here. We were able to find it relatively easily, although we nearly walked right past the mini-shophouse exterior with only the tiniest of signs. Siam Journey is situated among mum-and-dad convenience stores and laundromats in the sort of neighbourhood that typifies “everyday Bangkok”. The low-key immediate surrounds provide a pleasant contrast to the greater Siam Square area with its shopping malls and Western restaurants, within walking distance of the guesthouse. This is also a convenient choice if coming straight from Suvarnabhumi Airport as the Airport Rail Link terminates at Phaya Thai station. 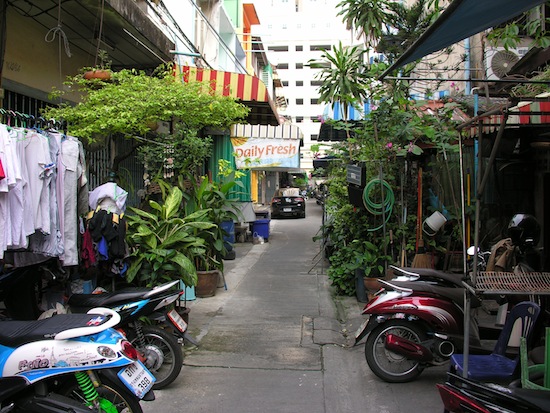 A little different than Khao San.

If not for a painting of a golden Thai khon dancer on the beige wall of the ground floor lobby/lounge, we would have felt as though we’d stepped into a youthful Seattle apartment during the early ’90s glory days of the grunge scene. Lived-in love seats and bean bag chairs surround a coffee table on a simple grass mat. Along with industrial-style lamps that hang over coin-op computers, a trio of olive green cloth lanterns provide the room’s dim light. It’s a comfy and inviting space in an art student hangout sort of way. 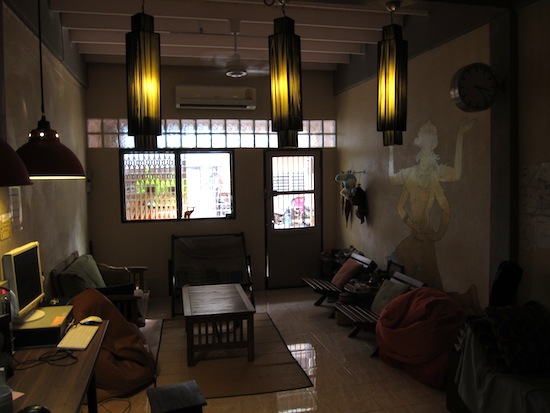 They’ve got some guitars too.

We weren’t exactly sure if the two younger guys who welcomed us, Henning and Shane, were employees or just long-term stayers keeping an eye on the place while the owner was out. In any case, they were both as friendly as they were laidback, and they made us feel like sticking around for a while. If time had allowed, we would have loved to have settled into the rooftop chill space with a beer or some tea and waited to see what interesting characters might show up after dark. 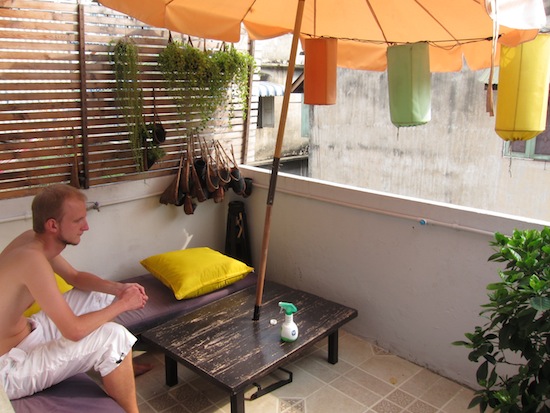 Although it says “guesthouse” in the name, Siam Journey is purely a hostel with no private rooms to speak of. A large 10-bed dorm and a four-bed dorm room are both mixed and come with air-con and fans along with large lockers. Mattresses and comforters are thick and each bed is equipped with a private reading lamp and electric outlet. Towels and drinking water are also provided free of charge. A peek inside the 10-bed dorm.

The 10-bed room is long and narrow while the smaller room offers a bit more space to go with a blackboard wall on which you can jot down your creative travel musings. Three simple hot water shower rooms are located down a flight of stairs and are shared among guests. A tiny kitchen area with a fridge is also communal, and WiFi is free throughout.

All beds cost 350 baht in high season and 300 during the slower months, and these rates seemed negotiable for longer stays. This is reasonable value for the facilities alone, but Siam Journey sweetens the deal by offering loads of well-thought out advice on how to approach Bangkok on your own, much of it written down on an informative bulletin board. The staff apparently go so far as to lead regular trips around the city and even as far afield as Amphawa, which is done on a casual basis and doesn’t typically cost extra apart from covering your own expenses. You’d have to have the social skills of a shovel to not make some friends at the weekly group events, including dinner parties held every Sunday. 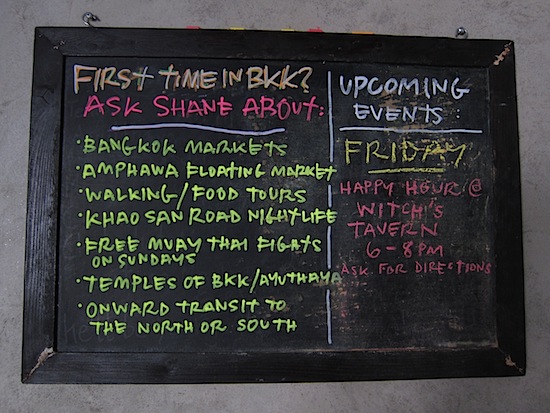 Helping guests make the most of Bangkok.

Overall, we appreciated Siam Journey’s funky atmosphere, unique location, helpful staff who become more like friends real quick, and most of all, the positive vibes. If you’re a first-time solo traveller to Bangkok whose on a budget, Siam Journey is a fantastic place to, well, start your journey.

The hostel’s website has a map from the BTS/Airport Link stations but it doesn’t supply word-for-word directions, so let’s take care of that as finding it can be tricky. You’ll want to take exit 1 out of Phaya Thai BTS station and then walk straight along the footpath on the west side of Phaya Thai Road. After half a kilometre, look for tiny Soi Nomchit on the right, which is little more than a narrow alley but is marked by a blue street sign. From there, walk into the soi then take the second right down a nameless sub-alley. Walk straight and you’ll bump into the guesthouse after 30 or 40 metres.