During the 1960s and ’70s, Bangkok’s building boom gave rise to a stable of hotels catering mostly to Western tourists and US servicemen on leave from the war in Vietnam. The Opera Hotel is one of the rare ones that remains open today, looking much as it would have decades ago. Yes, it’s novel and pokey. But with a personable staff offering a swimming pool to go with well-equipped rooms for under 1,000 baht, it’s also a solid option in the Pratunam area.

The two-floor motel-style building has hardly changed in the five decades since it opened, even as modern highrises crowded around it. An old block-letter sign in English, Chinese and Thai still hangs over the entrance. The hotel’s faded red-and-gold logo with a harp-strumming apsara still catches the eye. The word “CASHIER” is still placed over reception in the gloomy lobby, warmed by older women who greeted us with genuine Thai smiles before rousing a kind old “uncle” to show us the rooms. Old can be good.

They come with one large bed or two single beds, the cheaper editions facing a carpark around back and the larger ones set on the second floor overlooking the pool. The one we checked out smelled like Grannie’s rarely used guestroom: a bit dark and stuffy but carefully dusted. The ocean-blue padded headboard, floral wallpaper, woodpanels, pleather chairs and dim lamps all looked to be parts of the original design — and in surprisingly good shape. Dated, yes, but in a good way?

All rooms are equipped with small desks, air-con, several outlets and mini-fridges that also fall into the vintage category. Covered in fresh clean sheets, we found the firm beds comfortable. Flatscreen TVs, or at least the 1990s-style boxy ones, are the only real hints that you haven’t been shot back to the days of Easy-Bake Ovens. Hot-water bathrooms are medium size and come with bathtubs behind shower curtains. Internet is available at coin-op computers in the lobby. While the cheaper rooms aren’t too shabby, the slightly larger second-floor superiors are worth the extra 100 baht for wider tinted windows with pool views. 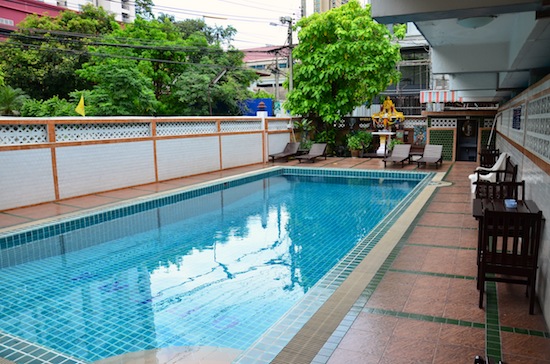 Late-afternoon beers by the pool?

Speaking of which, the Opera is one of only a few Bangkok hotels with rooms for under 1,000 baht and a swimming pool. It’s an oldie but a goodie: just large enough to swim a few laps and with a deep end in the middle (keep an eye on small children). A few tables and loungers are worthy of sun-bathing in your itsy bitsy teenie weenie yellow polka dot bikini, though tuk tuks rumbling by beyond a wall detract from the peace and quiet. If they made T-shirts with the logo, we’d buy one.

The included breakfast is served at the Opera’s old diner-style eatery, where the staff are as pleasant as at reception. It’s not hard to picture American army draftees sitting at a booth or the counter, nursing hangovers over bacon and eggs while trying to put the war out of their minds. We haven’t tried the food, but this is a fine spot to read and reflect on your travels without being bothered. The Opera has a terrific location among the much newer highrises of Pratunam, yet a step removed from the tourist crowds and touts found closer to the budget shopping centres. Ratchathewi BTS station is a 10-minute walk away, and the end of the Airport Rail Link line is also within walking distance at Phaya Thai station. Watch out for reckless drivers on these narrow sois.

If you don’t mind spending a bit more (and don’t need the pool), Lemonseed Rooms has larger and more modern digs on the same soi. Over on Phaya Thai Road, the massive Asia Hotel is another shining example of 1960s architecture with midrange rooms and a large swimming pool on the rooftop. Closer to Siam Square, the Reno is another old-school option with a pool and renovated rooms, while the Wendy has rooms for under 1,000 baht and more of a guesthouse vibe. Those into retro hotels might also like The Atlanta.