Graced with traditional Thai and Khmer artistic styles along with abundant water features, modern nuances and an impressive attention to detail, The Sukhothai achieves a level of elegance that few other hotels can match. If we had to pick just one of the Silom area’s many luxury hotels for an end-of-trip splurge, this would be it. 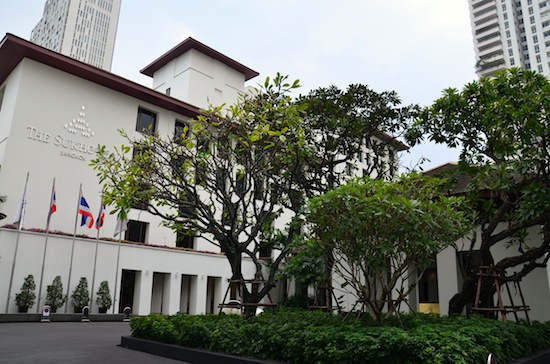 Stepping off busy Sathorn Road and onto The Sukhothai’s spread-out grounds, we were immediately soothed by dark-stone walkways, fountains, ancient Khmer and Thai-style statuary and an eye-catching pair of traditional Central Thai-style buildings in the centre of a lotus pond. Approaching the lobby, a silk shirted man opened a glass door and pointed us towards a sleek black desk, where three receptionists looked unruffled as they went about their work.

The woman who greeted us looked us in the eyes while she patiently explained the various room options off the top of her head. This is certainly a place where the non-wealthy rarely go, but there’s a non-pretentious air in everything from the muted green and grey accents in the lobby to the neutral looks on staff members’ faces as they noticed our sweaty T-shirt and jogging shoes. 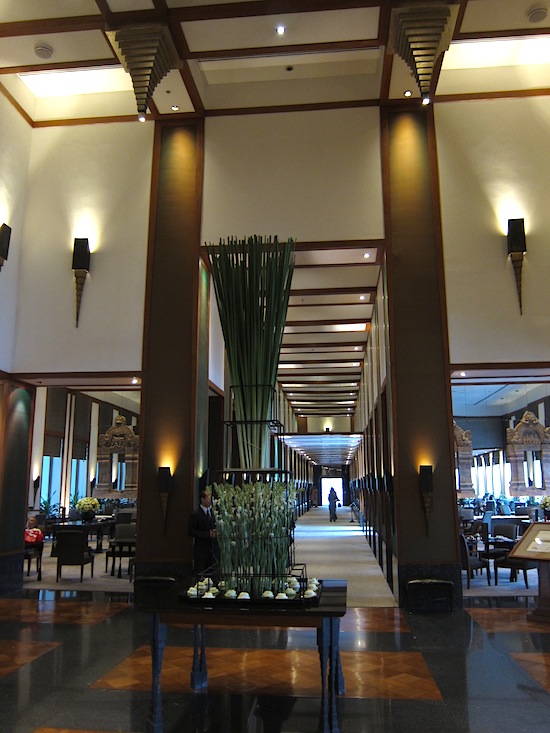 A glimpse of the lobby.

Unlike many “traditional Thai” designs that cross the line to gaudy, The Sukhothai has a welcome minimilism with just the right amounts of Southeast Asian arts and textures, placed in just the right places. There’s almost a sense of the sacred as you wait for the lift, with four different shafts found in all four corners of a space outfitted with dark teakwood floors and wall-size windows overlooking one of the many outdoor water features, all anchored by what appears to be a Khmer-style guardian statue at the centre.

Like in the ruins of the ancient Thai capital that it’s named after, The Sukhothai’s artistic elements range from red-brick stupas to sandstone statuary and triangular yantra patterns. Modern architectural touches are carefully woven in, keeping the place from feeling too much like a museum. With acclaimed designers and architects, Kerry Hill, Edward Tuttle and Pichitra Boonyarataphan behind it, The Sukhothai brings out the most tasteful of the Thai aesthetic. 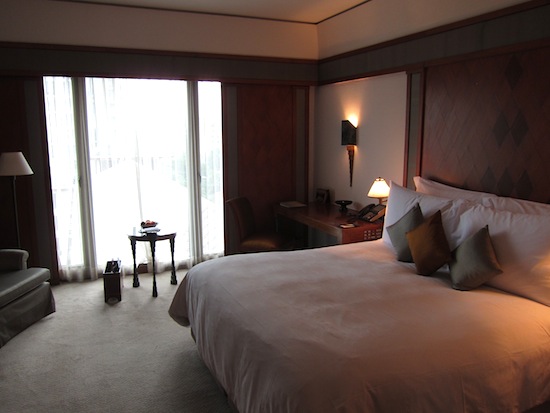 The bed sure looks comfy.

The superior room that we were shown continued with a subdued Thai-style theme that will calm travellers after the frenetic pace of Bangkok. The notably soft carpet was met by olive-green and ochre furnishings, soft lighting and a subtle triangular pattern built into the wooden wall above a sumptuous bed. A huge bathroom came with teakwood floors and a tub with Jacuzzi controls.

Pricier rooms are equipped with balconies and teakwood floors throughout. All expected amenities — TV, safe, slippers, minibar, WiFi and more — are included in all rooms. Starting at just over 5,000 baht a night and reaching up to a staggering 70,000 baht for the priciest suite, The Sukhothai aims to accomodate everyone from flashpackers seeking a splurge up to the all-out rich and famous. 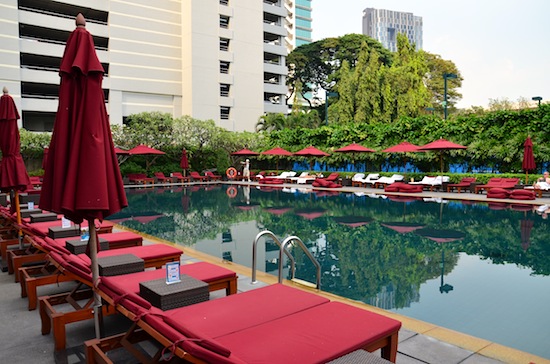 One of the larger hotel pools in Bangkok.

The hotel boasts a 25-metre swimming pool rimmed by comfy crimson loungers that are watched over by a snappy team of servers from the poolside Terrace Cafe and Bar. A nearby health club is practically as good as any fitness centre in Bangkok, while Spa Botanica offers an extensive menu of massages, scrubs, facials, manicures, aromatherapies, “energising wraps,” “hydrating cocoons” and more.

Numerous on-site dining options also include the Thimian coffee shop, the Salon chocolate buffet, the La Scala northern Italian restaurant and the Colonnade international restaurant, where an extensive buffet breakfast is served. The Sukhothai’s culinary standout is the Celadon, a fine-dining Thai restaurant focusing on artfully presented Thai royal cuisine. It occupies those traditional Thai structures rising over a lotus pond that we mentioned earlier. 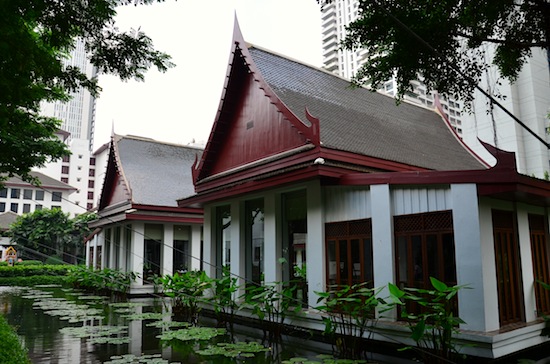 It may not be on a rooftop but still a memorable setting.

The Sukhothai is a medium-size hotel with two guestroom wings standing only five storeys tall, so unlike at the neighbouring Banyan Tree Hotel, you won’t get sweeping views of Bangkok’s skyline or a rooftop restaurant/bar. Bear in mind that if staying in the wing above reception, you’ll need to walk through the lobby and across an outdoor driveway to reach the pool and spa. Beyond these built-in drawbacks, we found The Sukhothai to be just about flawless.

While the location is central to Bangkok’s business district, reaching the nearest MRT station (Lumphini) or BTS station (Chong Nonsi or Sala Daeng) will require a solid 10- to 15-minute walk, or a taxi ride along often traffic-choked Sathorn Road. The area immediately surrounding the hotel is mainly occupied by embassies, condominiums and banks, so you’ll need to venture over to Soi Suan Phlu or up to Soi Sala Daeng to find much street food and nightlife. 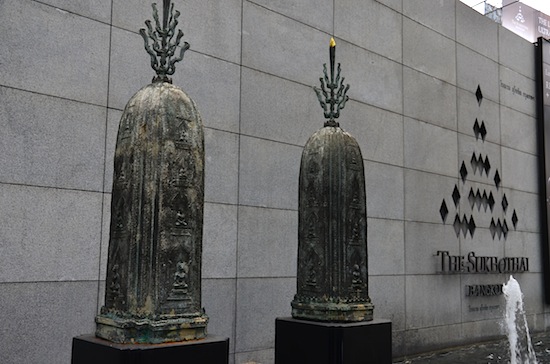 The Sukhothai is one of many luxury hotels in the Silom/Sathorn area. You might also consider the neighbouring Banyan Tree, Metropolitan by COMO or So Bangkok by Sofitel. A bit further down Sathorn you’ll find the Eastin Grand and Mode Sathorn, while upscale riverfront options in the area include the Mandarin Oriental, The Peninsula and the Chatrium.

Our top 10 places to stay in and around Silom

A good range of options

Great prices for what you get

Solid hotel in a great location

A steal for groups and families