Certainly one of a kind

One of the Thai capital’s oldest and oddest hotels, The Atlanta hasn’t changed much since opening back in 1952. The spartan rooms and uptight rules are definitely not for everyone, but vintage enthusiasts wanting to check out an unusual slice of mid-20th century Bangkok will find an institution, quite unlike any other. 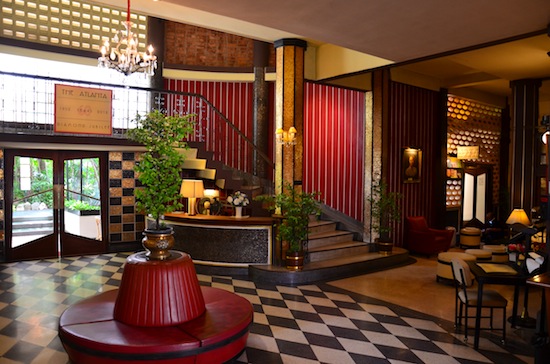 You may recognise The Atlanta’s foyer from a film or two.

The Atlanta’s founder, the German doctor, traveller and entrepreneur Max Henn, is said to have first acquired the five-storey cement building for his first big endeavour: a chemical company specialising in the distribution of snake venom. A pit that later became Thailand’s first hotel swimming pool was supposedly where the snakes were kept. Once the serpents were replaced by tourists, a terrace alongside the pool and nearby garden served as a bandstand and dance floor.

Sukhumvit Road was still a largely rural corridor of fruit orchards and small villages when Henn converted his failed venom factory into what must have been the trendiest hotel in town at the time. Though it remains one of the quieter side streets in what’s now central Bangkok, Sukhumvit Soi 2 has been filled in by modern buildings. A highway overpass now cuts right behind some of The Atlanta’s backside rooms. 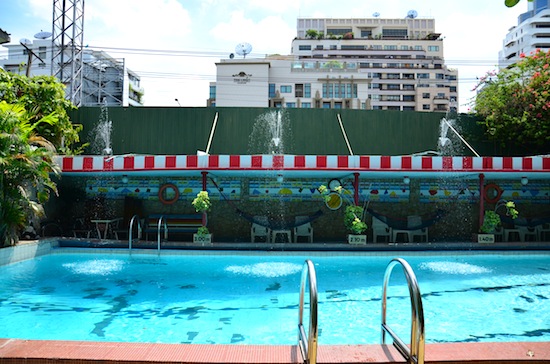 Along with the historic snake pit — or rather, swimming pool, which is a real score in this price range — The Atlanta’s most interesting feature is the dim foyer (pictured above) straight out of ’50s Americana. We arrived to find a rescued street dog lounging beside a bronze statue of a basset hound. Dark crimson sofas on black-and-white diamond-checkered floors, crystal chandeliers, glittering ceramic pillars and antique writing desks combine to make the space feel like the entrance to a classic theatre or cigar club.

In the attached Ah! restaurant, it’s not hard to imagine James Dean and Audrey Hepburn savouring coffee and cigarettes amid the diner-style booths. Jazz by the likes of Ella Fitzgerald and Louis Armstrong whisks you back in time. If it weren’t for the Thai food, which the hotel rather arrogantly claims to be of “ABSURDLY high” quality, you could easily forget that you’re in Thailand. 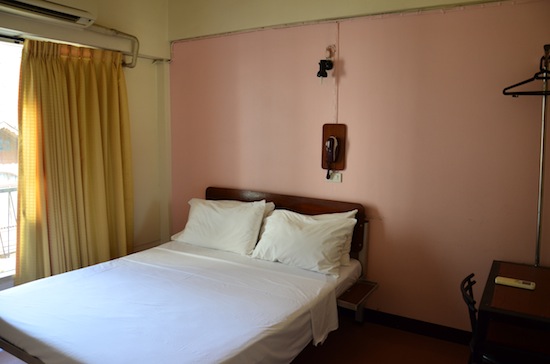 On the other hand, the rooms won’t leave you too intrigued.

Certain artistic types will no doubt revel in The Atlanta’s mystique, but those judging solely on the accommodation might be disappointed. Set on upper floors reached by long spiralling staircases, the cheapest rooms are reminiscent of a ’50s hospital. Firm mattresses are raised off tile floors, pink walls have no hint of decor, wet bathrooms are cramped and the only furnishings are tiny tables, mirrors, old-school (non-ironic) phones, cast-iron lock boxes and air-con or ceiling fans. The rooms are tidy, however, and small balconies are worthy of a smoke. Larger rooms are situated on lower floors and set up with families in mind.

Despite the “let’s do the twist” ambiance, The Atlanta might be the most uptight hotel in Thailand. While we appreciate a “no sex tourists” policy, several online reports suggest that all Thai women and many other Asians are turned away. The hotel’s wordy “caveat” explains that “The Atlanta does not apologise for any mistakes it may be accused of having made with regard to the identification of sex tourists”. “Undomesticated people”, whatever that means, will also be told to leave. 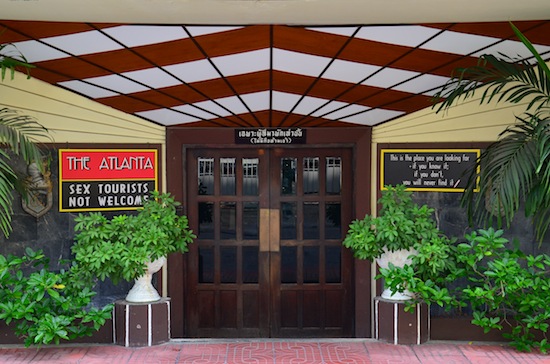 The Atlanta’s “caveat” sounds like it was written by a bitter early 20th century school headmaster.

The website goes onto say that, “Families that do not keep their children under control will be told to settle their bill and leave in no uncertain manner”. Staff are notoriously frosty, and signs around the hotel say that complaints are not acceptable. We feel that the retro facade and historic status don’t excuse The Atlanta’s arrogant outlook. If you’re gonna be a soup nazi, you’d better sell damn good soup. In this case, the soups (i.e. rooms) are just okay.

Every individual will gauge The Atlanta’s value (or lack of it) differently. You do get a fairly large pool to go with the retro atmosphere, but then there’s the brusque staff, strict rules and forgettable rooms. Rates start at a base sum for one person, adding 250 baht for each additional guest and then plopping a 7% tax on top. Still, it remains one of the only hotels in the pricey lower Sukhumvit area that offers private rooms for under 1,000 baht.

The Atlanta is located all the way at the end of Sukhumvit Soi 2, within a 10-minute walk of Phloen Chit BTS station. A Baptist church is next door, just in case you need some churchin’ up to help you be “wholesome” enough to stay here. If this sounds more like a novelty than an actual good place to stay, consider shelling out a bit more for Hotel Solo or iCheck Inn, two comfortable modern hotels on the same street.