The Moroccan-themed Imm Fusion Hotel serves up decent-value rooms in a setup that’s one-of-a-kind in Bangkok. Read on if you seek affordable comfort and a swimming pool, and don’t mind an out-of-the-way location near On Nut BTS station. 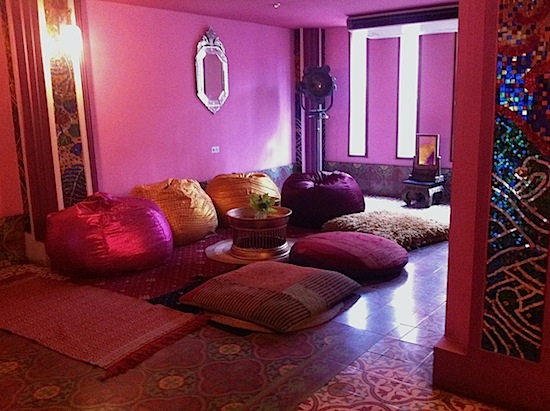 Colours in common spaces can be a shock.

Set in what was once an alley between two buildings, Imm Fusion’s lobby is a clever piece of work. Asphalt has been covered over with tile floors, outer walls of the adjacent buildings (which house the guest rooms) were painted violet, and white-washed windows over the roof allow sunlight in while keeping the elements out. Long cushioned hangout nooks rim either side of the lobby.

There’s also an over-the-top sparkly lounge where it’s easy to imagine Aladdin lounging on the silky bean bags beside glittering pillars, tall shisha pipes and seriously purple walls. It reminded us of the set for some 1970s adult film that would obviously be called “Magic Carpet Ride.” At the back end of the lobby, enormous wooden doors open to a small but atmospheric swimming pool where you can pretend that you’re a bathing sultan circa the year 1400. They’ve certainly made the most of the space.

Only offered to solo travellers, standard rooms are just large enough to swing a cat and come with double beds on terracotta-tile floors, TVs, air-con, small desks, one small window and hot-water bathrooms. Considerably roomier and brighter, superiors bag you a fridge and safe. The deluxe we checked out was spacious, smelled fresh and had plenty of the Moroccan decorative touches. We noticed some stains on the hallway carpets but the rooms appeared clean.

WiFi is free and facilities also include a small spa and restaurant. We’ve always had fine experiences with the young staff. The Imm is a solid hour-long trip by skytrain and taxi from Khao San Road, but the shopping and nightlife of Thong Lor, Asoke and Nana are a few stops away. Suvarnabhumi Airport is also within relatively easy striking distance, making this a decent option immediately before or after a flight.

Overall the accommodation represents solid value, especially if you’re a solo traveller and can score a standard for under 700 baht a night. If you don’t care for the Imm’s pool and all of the pinks and purples, The Mix Hotel is a more straightforward choice with slightly cheaper rooms next to nearby Phra Khanong BTS station. Closer to the Sukhumvit action, RetrOasis Hotel and The Atlanta both also offer flashpacker-range rooms along with swimming pools.