Industrial-chic The Blocks is yet another design-y hostel geared to budget travellers looking to stay near the happening nightlife of lower Sukhumvit. While rather cramped, the dorms have some unexpected features and the common areas rival some of Bangkok’s pricier hostels.

Opened in 2014, The Blocks occupies a block-like building that was gutted and redone with lots of polished concrete and black-wire fencing that’s supposed to be decorative. Most interior spaces are on the dark side of the force (pardon the Star Wars reference; the receptionist was wearing a Darth Vader T-shirt), though wide windows in the ground-floor lounge help to brighten things up.

Located on upper floors reached by a narrow stairway when we came through (apparently the lift was out of order), several different dorm rooms come in mixed and women-only, with 50 baht chopped if you’re okay with a six-bed room rather than the four bed. All of the rooms are tight, with thick mattresses set on black steel bunks that each come with a reading lamp and outlet. 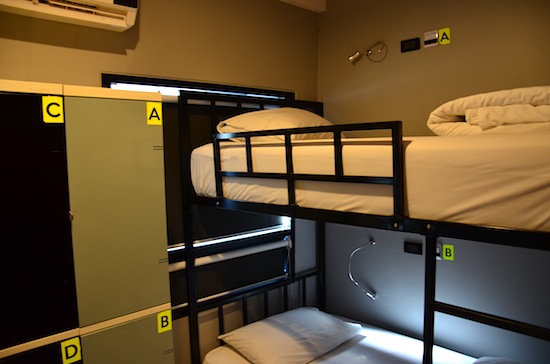 We need to invest in a wide-angle lens.

You might not mind the cramped space when considering that each dorm room comes with its own “ensuite” hot-water bathroom and large personal lockers situated right next to your bed. Additional bathrooms are found out in the hallways for those times when a roommate hogs the shower. All rooms are air-con and cleanliness is well looked after throughout the building.

The Blocks also offers private double and triple rooms with ensuite bathrooms, but no windows in the double. The price seems a bit high for a small windowless room with nothing but a bed, especially when compared to the cheaper/better private rooms at nearby Fu House Hostel. On the other hand, The Blocks’ dorm rates are right where we’d expect.

Several common spaces are on offer, including a rooftop terrace with a few tables and “living room” where you can sprawl out on beanbag chairs while taking in a movie on the widescreen. There’s also a shared computer area (WiFi is free), a bar with a few liquor selections, coin-op laundry and a small kitchen. This is a complete hostel package where you can meet other travellers or keep to yourself. We didn’t have much luck trying to chat with the sleepy looking staff. 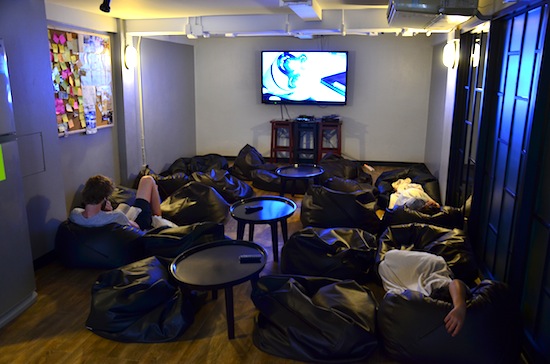 The Blocks is located a few steps down a side alley off Sukhumvit Soi 10, an easy walk from Asok and Nana BTS skytrain stations. It’s a convenient and lively area, but some will be put off by the neighbouring Lollipop Bar and its mildly sleazy atmosphere. The thumping clubs of Sukhumvit Soi 11 and trendy boutiques of Terminal 21 are just across the road. If you want to avoid the more widespread seediness, steer clear of nearby Soi 4.

Along with the aforementioned Fu House, which is a further walk from Sukhumvit Road on Soi 10, other hostels worth considering in this area include the swankier 3Howw on Asoke-Montri Road, the cheaper COW Hostel on Soi 19, the more personable Bodega Hostel on Soi 23 and, if you don’t mind staying closer to Nana Plaza and its seedy bars, CheQinn and WH hostels off Soi 4.