Set in a restored century-old shophouse, Ai Phuket Hostel is a cheerful place to stay with a mix of dorm and private rooms in a central Phuket Town location. 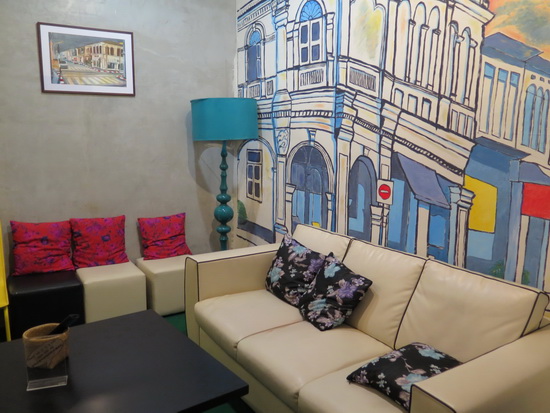 Phuket Town is the heart of budget accommodation in Phuket, and in the Old Town area more hostels with some added design flair have been opening up. Among them is Ai Phuket, which opened in early 2013 with heaps of character, having each room done up in a different colour theme and boasting rather dreamy names such as Jade Garden or Blue Flower.

Women-only dorms with six beds and eight-bed mixed dorms offer the cheapest rooms, with walk-in rates at 299 baht. The bunk beds are packed in tightly together but the colourful murals on the recessed ceiling offer something to look at while you drift off to sleep. The shared bathrooms with a row of designer basins in red set are the snazziest we’ve seen at this price level. 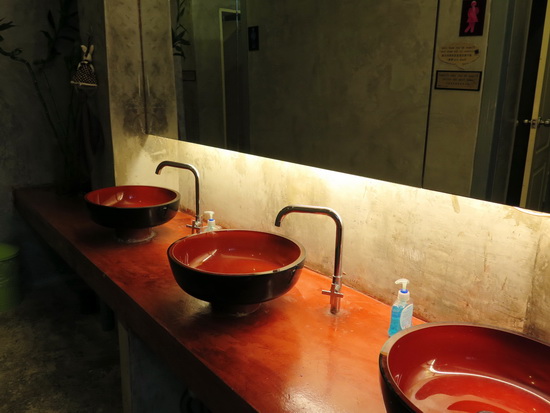 A resort-style bathroom design rarely seen in a cheap hostel.

Two styles of private rooms are on offer, the cheaper option at 750 baht with a shared bathroom while for 950 baht per night you’ll have a private bathroom.

All rooms, both dorm and private, have duvet bedding, air-con, hot water showers, WiFi and self-serve breakfast included. For keeping your stuff secured, lockers and a safe at reception are available at no extra charge.

Ai’s common areas are just as welcoming, from the bright lobby at the entrance to the cosy lounging spaces inside, including one with a cartoonish looking Old Town building mural painted on the wall. Out back is a small walled garden terrace, where the coin-operated laundry machines may be found. 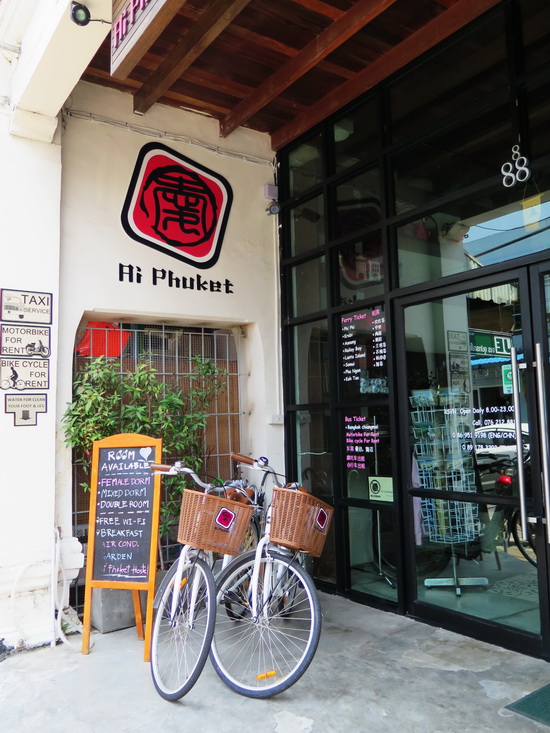 This 100-year-old shophouse was gutted and made anew.

Though being in a busy part of town might not make it the most peaceful choice, the hostel’s location is ideal for exploring the Old Town sights and historic Sino-Portuguese mansions. The bus stop where songthaews depart regularly for all of Phuket’s main beaches is an easy walk away on Ranong Road.

It’s also well positioned for finding some of Phuket’s best cheap eats and nightlife. A short stroll along the road leads you to the hectic Lock Tien noodle shop, the chic Wonderland bar, Sanaeha Phuket pub (where young and hip locals gather), plus the long-running Timber Hut bar with live rock music nightly. There is a bar right next door, but we were told noise is not a problem as it shuts down fairly early. 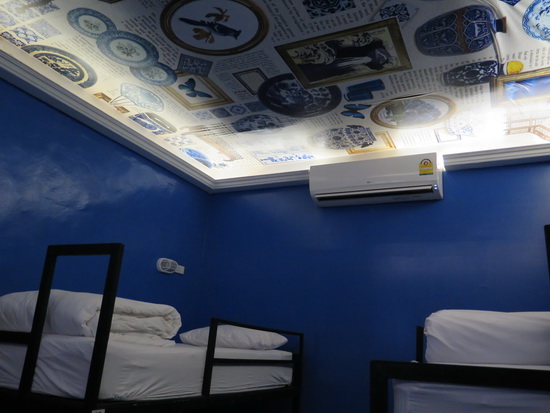 Feeling blue, in a good way, in the cosy dorm room.

Tours and transport may be arranged at the front office, and we found the reception staff here to be refreshingly alert. They were proud to show off every nook and cranny in this rainbow-hued, narrow maze of a building.

For budget-minded travellers who don’t need to stay near a beach, Ai Hostel’s friendly staff and vividly designed decor gives you a bit more bling for your baht in Phuket.