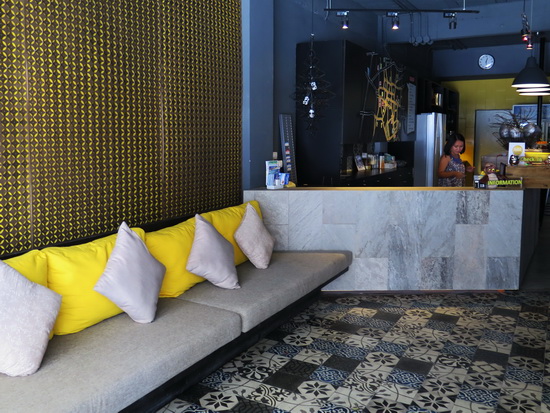 The lobby reflects the blend of industrial and Sino-Portuguese style.

Open since August 2014, Fulfill has an industrial look with polished concrete floors and walls, sprinkled with intricate tiling and other Sino-Portuguese design touches. On the ground floor is a cafe with a cappuccino machine and 24-hour reception, plus a tour desk and some groovy yellow Vespas for show.

All the guest rooms are found upstairs, with the tiny but well designed private rooms on the second level, mixed four-bed dorms on the third level, and on the fourth floor more dorm rooms and a rooftop garden were still under construction during our visit. 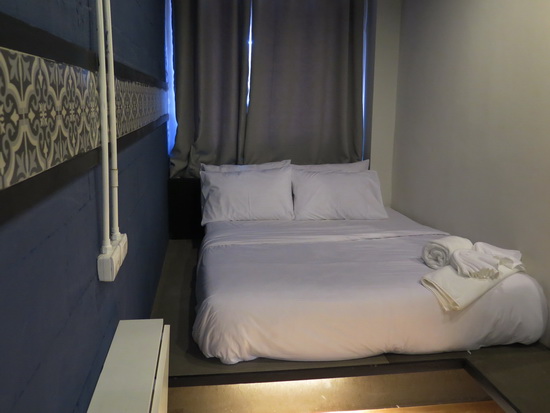 You’ll need to get along well with your bed partner in these super-cosy private rooms.

The air-con private rooms, priced at 600 baht in low season, are small with a double bed set on a raised platform and an ensuite bathroom with hot water shower. The rooms have a small window behind the bed with no views, or if you stay in a street-side room you’ll have a larger window at the side – but be prepared for some traffic noise. Though these rooms, at only 15 square metres in size, may not fulfill your need for space, they are comfy and very clean. We also liked the bedding here, soft white duvets and sheets adding to the cosiness. 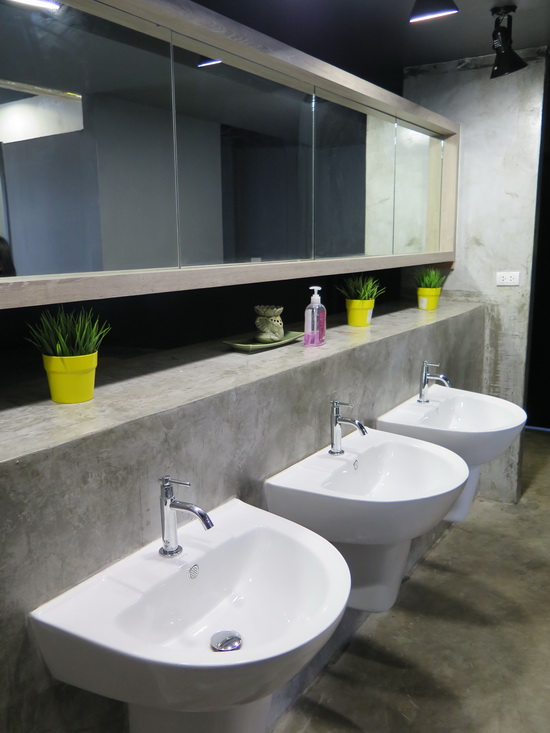 Clean bathrooms are always a bonus for dorm-dwellers.

In the dorm rooms – also air-con and rather small in size – are two sets of bunk beds, each with their own side cupboard for stowing away your clothes or other items. The cupboards could use some doors and locks for better security, but we were told any valuables could be kept in the locked storage area downstairs and that lockers would be added soon. The bunks are firm but also have the snowy white bedding of the private room for added comfort. The dorms are priced at 350 baht per bed per night.

On the dorm level is a common area with sofas and a TV, and near the stairwell is a kitchen and laundry corner equipped with a microwave, sink, coin-operated washing machine (20 baht per load) and racks to hang your clothes. The shared bathroom facilities – three sets of separate sinks, toilet cubicles and hot-water shower stalls — are modern and clean.

On our visit we were told the high-season rates were not yet set, but checking online, we found the private rooms priced at about 1,100 baht. Given the small space and prices of comparable hostels and hotels in the area, this is too high so it would be best to check directly with Fulfill before making a booking during the busier months of November through April. Prices include WiFi. 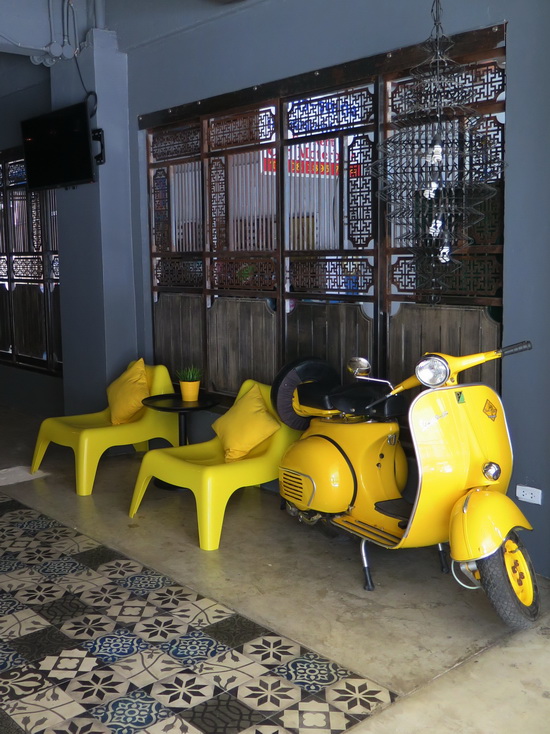 We didn’t try the cafe, which serves breakfast and sandwiches, but we expect the coffee at least would be good given the investment they’ve made in the cappuccino maker. Its location in a bustling area at the edge of Phuket Old Town places it within easy walking distance of some of Phuket’s best local food choices, plus a number of Western restaurants including the Pancake House Café next door (if walking an additional block for roti pancakes is too much trouble).

Other Old Town sights including Sang Tham and other Chinese shrines, the Lard Yai Sunday street market, Thai Hua Museum and Soi Rommanee are also an easy stroll away. For transport to the beaches, the songthaew bus station and plenty of tuk-tuks are just up the road.

Though Fulfill hostel, found in a former office, might not have the historic charm as other well-priced Phuket Town accommodation such as Ai Hostel, Rommanee Boutique Guesthouse or the revived Memory at On On Hotel, it’s a welcoming, clean and modern place that will appeal to those on tight budgets who don’t mind the tight spaces.