From the outside, the Golden Lotus look much like any other mid to upper-range place in Hanoi: narrow frontage, gold signs, big-glass doors and a uniformed doorman, but these would be our affordable luxury choice in Hanoi and would suit a couple with a mid-range budget or looking for a treat while in town.

The location is convenient, within a few minutes’ walk of Hoan Kiem Lake, around the corner from St Joseph’s Cathedral and within spitting distance of numerous shopping and dining options, both boutique and budget. This area of the Old Quarter is a little quieter than the area north of Hoan Kiem Lake, and along with the wide street has a less frenetic vibe. All rooms have air-con, minibar, safe, LCD TV and a range of quality bathroom accessories. They also come equipped with slippers, bathrobes – not fluffy, but we’ll let that one pass – and cute tea sets, which you’re unlikely to use but which enhance the overall interior design.

On the subject of interior design, the rooms here are some of the most beautifully decorated and adorned that we’ve seen – if you ignore the Sofitel Metropole Legend and like a more elaborate style. Usually there’s a note about stealing the robes, here it’s the tea cups.

Rooms are contemporary in style, with colonial-style slatted wardrobe doors and window shutters, dark red walls and classy black and white framed photographs — they still have the tea cups though. The style continues into the hallways, where large glass paintings are displayed alongside traditional statues.

The rooms here, however, are smaller, and the cheaper rooms in the middle of the building are quite a squeeze. Those at the front are the priciest; with lovely slatted shutters over doors that open onto a street-facing balcony. Most bathrooms have a bathtub with shower over, and the TVs are positioned at strange angles, making it tricky to watch from the bed — but maybe that’s an advantage for some. They also offers two suites, the Classic suite and the Golden Lotus Suites — similar, but the latter has a balcony. 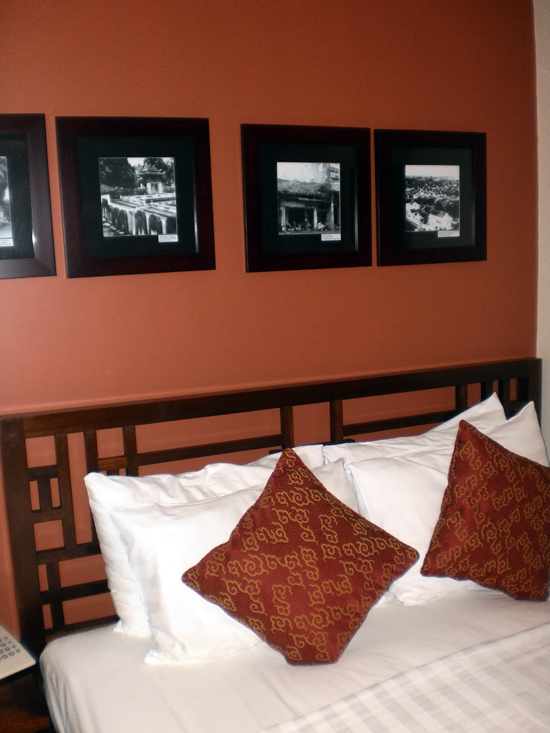 Rooms are reasonable value, with a modern style and a restaurant and bar may make it appealing and worth the cash. Rates include a hot and cold buffet breakfast, taken in the basement restaurant, and internet access. 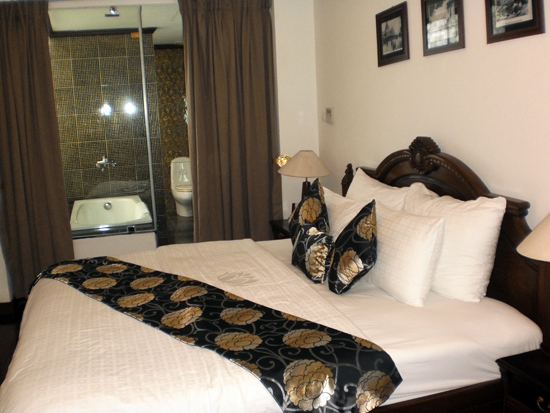 Enjoy a chat while you’re in the bath.

The Golden Lotus Hotel is not our only recommended hotel along Hang Trong. Alongside is Maison D’Hanoi, a chic luxury option, and more traditional Golden Rice Hotel is on the opposite side of the road. However, for style and comfort, this hotel has the edge.

If you like the area — and why wouldn’t you — but can’t stretch to the rates on Hang Trong, it’s not far down to Little Hanoi Hostel 2, on Le Thai To, or the numerous lower priced options along Au Trieu, by the cathedral.