No shortage of character

It doesn’t look like much from the outside, but midrange Classic Street Hotel — also known as Pho Co Hotel — on Hanoi’s lively Hang Be Street in Old Quarter hides some well-furnished comfortable rooms within.

From the street, you can see straight into a gloomy basement dining area and reception is up a short flight of stairs, so there’s no smiling receptionist or doorman to entice you in. But once inside, things start to look up. Why? Firstly the atrium area which divides the front and back of the hotel, though a bit tired really, lends the hotel an unusual and intriguing design edge, as well as some welcome light. The other public areas are also awash with character: solid wooden furnishings, traditional art and other decor. Next, rooms are divided across three main areas, each accessed by a separate entrance and contributing further to the sense of exploration and discovery. The older rooms are at the front, over reception, open onto hallways overlooking the atrium and are reached via a small staircase with an intricate cast iron handrail; the other original rooms are up a wide and curved set of stairs at the back of the atrium; and you have to walk through the large dining area at the back to take the lift to the rooms in the new wing. Not exactly stylish, but intriguing.

Then of course, come the rooms — we were quoted low season prices of $35 and $40, with a $5 reduction for single occupancy (high season sees prices rise to $45, $50 and $55). Rooms at all levels have the standard facilities for rooms in the midrange price bracket: air-con, TVs, desks, mini-bars, decent toiletries, internet access and, importantly, squidgy, well dressed beds. But as you might expect from the name, rooms in the the old wing are a bit dated, with cheaper looking furnishings, although the bathrooms have been updated and house quality showers — it’s a shame they’re on the small side. The difference between old and new wing? The cushions. And the furniture.

Rooms in the new wing are much smarter, with attractive dark wood furnishings, and this is where you’ll find the larger, more expensive rooms, with balconies and/or large windows. Note that all rooms have windows but the amount of light corresponds to the price of the room and in our view it’s worth paying extra.

Although the hotel may claim that all rooms have a view of Old Quarter, none of the views I saw were worth writing home about, so you’re better off elsewhere — Stars Hotel or the Golden Lotus Hotels perhaps — if you want to indulge in a bit of people watching. So maybe gloomy basement is a bit of an exaggeration.

Breakfast is included in all prices and consists of an a la carte selection of both Western and Vietnamese breakfast dishes. Although the manager who showed me round was very proud of the dining area, I found it a bit gloomy and not very inviting. But who needs light at that time of the day anyway.

Hang Be street is slap bang in the middle of the action, so it’s convenient but noisy. Fortunately the rooms at the back of the hotel are well off the street and protected from the activity, so it’s got the central location without the downsides. 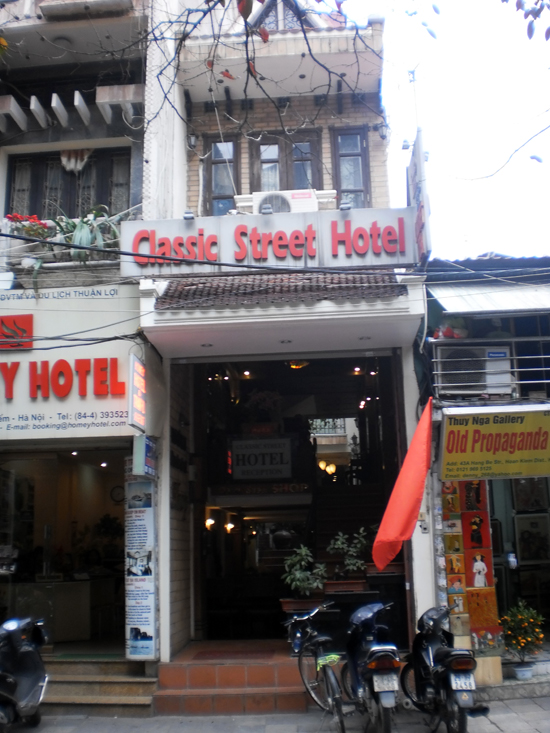 If you’re after a hotel with some character then it’s one of the better options in the area, and if you can avoid paying the rack rate, rooms in the new wing are reasonably priced. Old wing rooms are cheaper, but the furnishings are dated and disappointing, and for the same price rooms at Cozy Hotel II are a better bet.