Central Backpackers’ Hostel offers both dorms and private rooms, all with air-con, at rock bottom prices to suit the real budget crowd — with free beers for an hour each night thrown in. The focus here is cheap, cheap, cheap.

Located between JOMA coffee shop and Pho Ly Quoc Su on Ly Quoc Su itself, Central Backpackers’ Hostel should be easy to find — unless you’re looking for the old place, which was on the other side of the road and down an alley. Oops — one point off for Sarah. 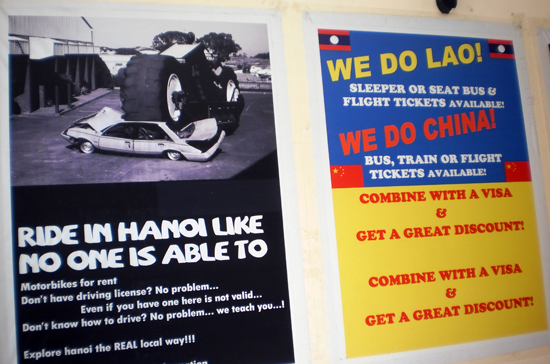 Do you do Lao too?

Ly Quoc Su runs north-south between St Joseph’s Cathedral and Hang Gai Street, a few blocks to the west of Hoan Kiem Lake, and so it is both centrally located and convenient for the Vietnam Airline’s airport bus pick-up and drop-off point — so as long as you don’t mind a short walk it’ll save you having to contend with those pesky taxi drivers — yet a bit quieter than the Ma May / Hang Be area of Old Quarter.

Dorm rooms sleep eight in four sets of bunks and have one bathroom, with shower, in each room. That could lead to some big queues or arguments in the mornings, so don’t leave it until the last minute to get up for that Halong Bay trip. Rooms are adequate; a little cramped maybe, but light enough to not feel too closed in, with standard-sized metal framed bunks and a set of large lockers for belongings. As is often the case when I visit hostels, it’s tricky to get a photo of the room or test out the beds — there’s always someone half dressed and half asleep and beds are rarely made-up — but rooms appear well-maintained, mattresses are sturdy and bedding clean. 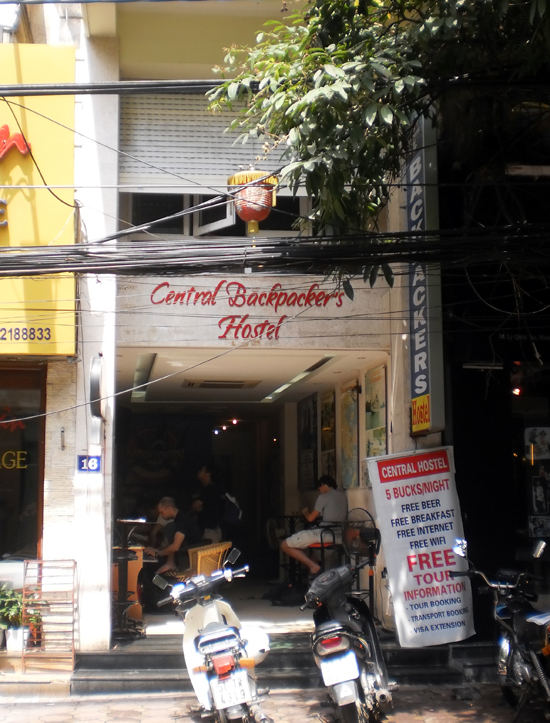 A breakfast of bread and jam is included and is taken in the downstairs restaurant area, which is also home to the bar and the nightly free beer hour from 19:00 to 20:00. We’ve not been but are guessing it’s a popular gig, and a good way to meet other travellers, particularly if you don’t like your room-mates.

As you’d expect, the hostel is able to take care of all your travel booking arrangements and runs its own Halong Bay trip which they claim is only the “second tour in Hanoi that stays on a private island in the Cat Ba National Park, where you can find the bungalows, party (with FREE alcohol with the House Music)”. They also guarantee that if you do the Halong Bay and Sapa trips with them, “You will get the BEST time and the BEST one with the cheapest price!” Sounds good, hey? 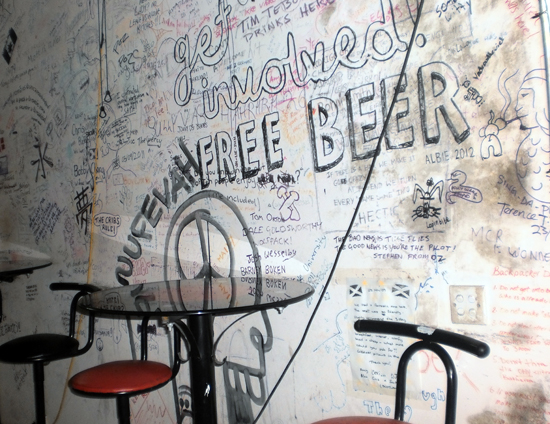 Did you hear they had free beer?

At US$5 per bed, Central Backpackers’ Hostel is cheaper than most other dorm beds in town — most of which are US$6 — and includes the same benefits (well, breakfast and free internet). Rooms are $22 to $25. 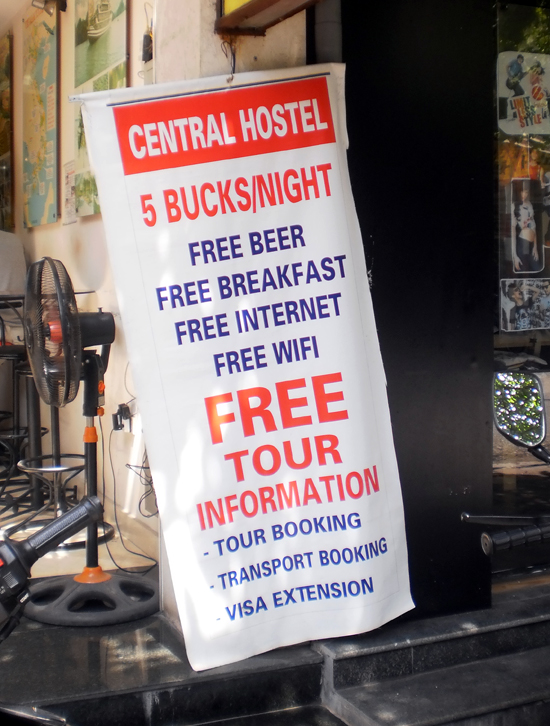 Value, value read all about it.

There’s something about the attitude at Central Backpacker’s that we don’t warm too, but it’s hard to put a finger on exactly what it is. Perhaps it’s because the staff don’t seem to smile much or because the narrow reception area feels a bit claustrophobic and crowded. Nonetheless, it consistently gets good reports from guests for the staff, the tours, the room and the free beer, so it’s clearly doing something right, and at a good price.