With 70 bedrooms, Hanoi Pearl Hotel is a very large new addition to Hanoi’s hotel scene. Dominating the skyline on narrow Bao Khanh, this modern hotel — with a Vietnamese twist — offers pricey but excellent rooms close to the action.

Many of the new top-range hotels in Hanoi go crazy on shiny marble, sparking chandeliers, gilded picture frames and heavily upholstered furniture, so the natural, muted colours and dark woods of Hanoi Pearl are a delightful change for us bling-weary hotel reviewers. It’s a professional set-up with uniformed staff and a smiling sales manager to show around enquiring potential guests and nosey passers-by. 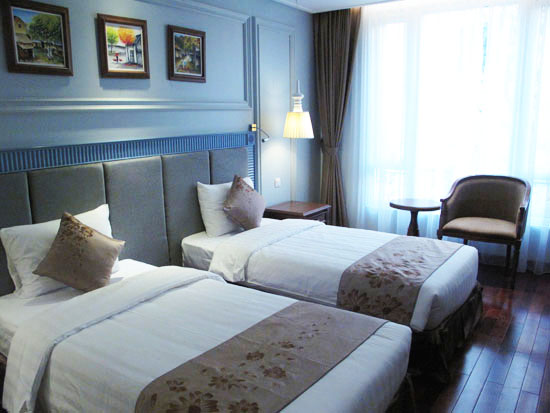 Shame about the pictures.

Rooms are beautiful. With white panelled walls, stylish furniture and heavy plain curtains, they’re only let down by the bright Vietnamese paintings on some of the walls — not in evidence in any of the shots on their website — which in our view should be reinstated in the souvenir shops along nearby Hang Gai and replaced with something more in keeping with the understated style of the rooms. Bathrooms are top notch too, but note some come with a shower over bath and others with just a shower cubicle, so be sure to ask if you have a preference. 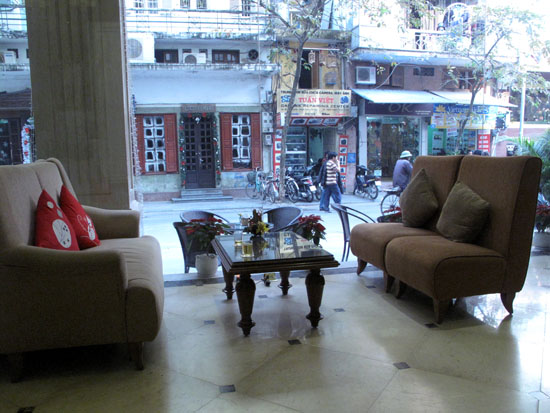 No heavy dark wood. No gold.

The cheapest rooms – superior — are small but certainly not the smallest we’ve seen and would suit most requirements. Note that despite the ‘view’ claim on their website, many windows in the superior rooms actually face a wall. They’re bright though, thanks to the white walls, mirrors and good lighting. 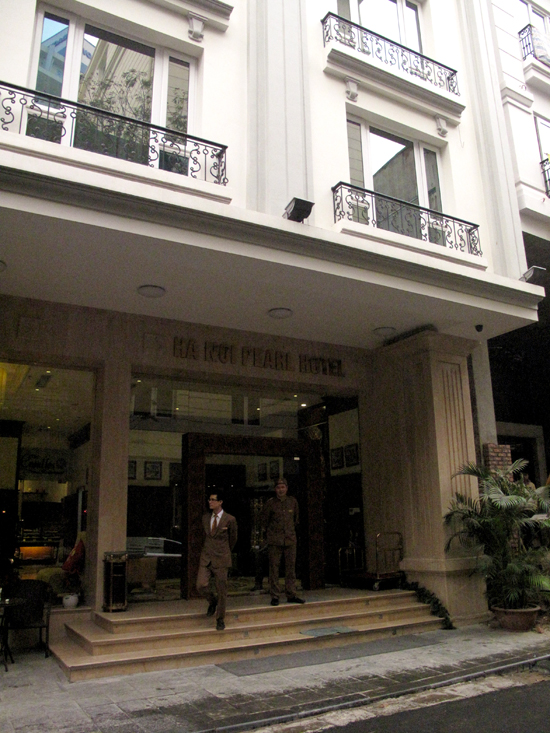 Facilities are as you’d expect from a quality hotel and common across all rooms, but as prices increase so does floor space. We were quoted US$70 for a double superior and US$80 for a deluxe room, with US$10 discount for single occupancy. Given the price differential we’d recommend upgrading to a deluxe room if you can, for a bit more space and a view — not much of a view, granted, but it’s better than a wall. Executive rooms jump up in price and the suites are the piece de resistance: with 55 square metres of space, including a living area and a balcony with a decent view. Connecting rooms are also available as a family suite. 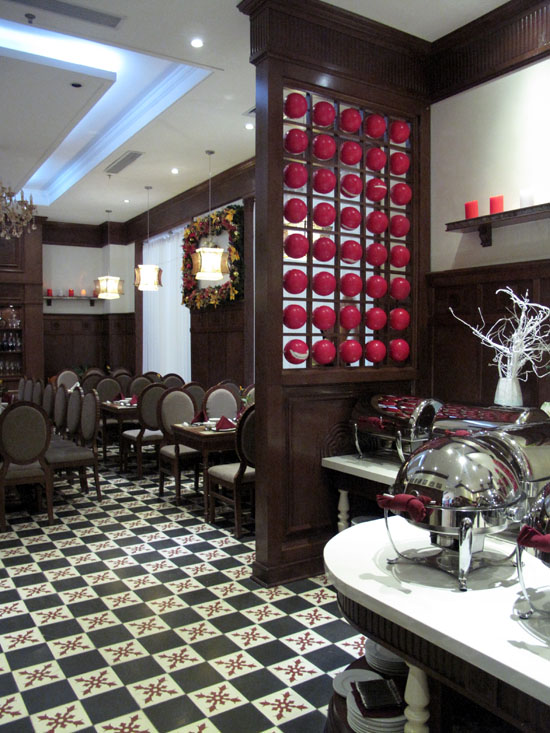 Count as you eat.

Breakfast is included and served in the stylish restaurant. It’s small, given the number of rooms, so you may wish to adjust your breakfast time to avoid the crowds – check the busy periods with reception. The final bonus is that the hotel’s equipped with a small fitness centre.

Hanoi Pearl opened in mid-2013 and claims to be running at 95% occupancy, so it must be doing something right. It appears to be popular with large tour groups, so that could be helping, but don’t be put off if you’re travelling independently as it still has a personal feel.

Bao Khanh is well located for the lake – a couple of minutes’ walk away – as well as various street food joints and local restaurants, bars and coffee shops. We’ve read some minor complaints about noise from the bars opposite, but given Hanoi’s relatively strict closing-time regulations – which at the very least means doors will be shut and music turned down — we’d be surprised if this was a big deal. This isn’t Ma May or Ta Hien, after all.

The area isn’t short of boutique and high-end hotels, with Golden Lotus, Maison d’Hanoi and Church Boutique nearby. Rooms at Hanoi Pearl are a similar quality to the latter three and prices compare favourably.