Especen Hotel is in a great Hanoi location, near to St Joseph’s cathedral, the lake and heaps of shops and food spots, and offers bright and well decked out rooms at really good value. It’s a good choice for those prepared to spend a little more than backpacker rates for extra comfort and space.

Rooms differ slightly depending on whether they’re in the original building or the annex, although all are freshly painted white with comfy beds, inoffensive laminate furniture and lots of light. Double rooms are in the annex and slightly higher quality, with wall-mounted LCD TVs, laminate flooring, modern sanitary ware and shower cubicles in the small but perfectly formed bathrooms, hairdryers and kettles. Doubles go for US$20, excluding breakfast. Family and twin rooms, in the original building, have more space but older TVs and lack the shower cubicles — wet rooms instead — and have no hairdryers and kettles. So if you want to make yourself a cuppa in the morning while drying your hair in front of a 32? TV, opt for a double. On the other hand, the twin and family rooms come with a couple of chairs and some have balconies; we were quoted $25 for the family, which have a queen size and a single bed, and $20 for the twins – again excluding breakfast. 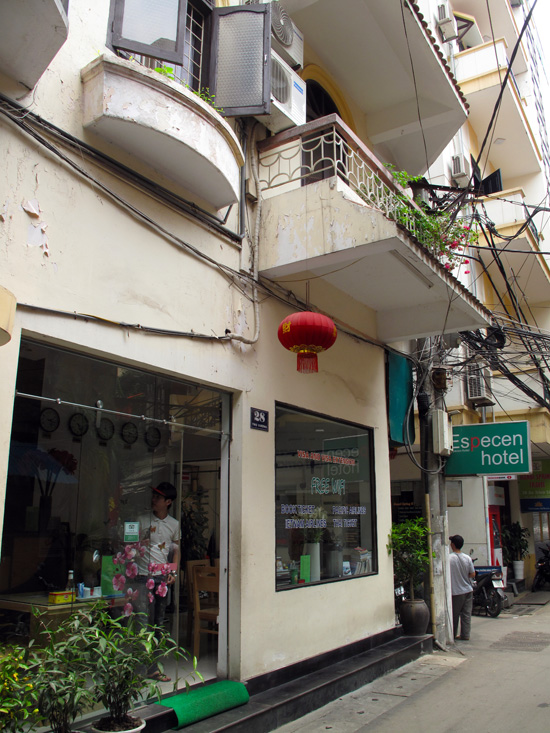 Balconies in some rooms.

The photos on their website are an accurate representation of what you’ll get — apart from the wine, rose petals in the sink and flowers, which don’t come as standard – and are from a more interesting angle than I was able to capture without the aid of a step ladder.

Breakfast is available for US$3 in reception area. For your money you’ll get a choice of pho, crab noodles or various omelettes, fruit or yoghurt and tea or coffee. It’s good value but if you want to eat on the street, the hotel is tucked away on Tho Xuong Street, between popular backpacker hangout, Ngo Huyen, and Au Trieu Street; from here it’s easy enough to head out to Ly Quoc Su or treat yourself at The Cart or Marilyn, both of which are a few minutes’ walk away. The quiet alley outside.

Rooms were available when we visited but it’s recommended to book ahead if you can – at time of writing, rates on their website were the same as the walk-in rates so you’re unlikely to bag a bargain by leaving it until you’re in town. If you do pop along and find out it’s full, numerous options in the same budget can be found along both Au Trieu and Nho Huyen.