Know Before You Go: Burma

Know Before You Go: Burma

Burma. Just the name conjures up all kinds of images, from glittering, golden pagodas, to despotic, totalitarianism regimes. It's a land where people regularly rub ground-up tree bark on their faces and drinking sweetened tea is not a snack, but a way of life. Before you visit this enigmatic land, you should know a number of logistical details.

First things first: you need to get a tourist visa before you arrive. Don't believe the "visa on arrival" signs, as the programme doesn't exist in the way you think it would. Yes, you can get a "visa on arrival", but you have to arrange for that first via an embassy, which means you don't really get it issued on arrival. So, you'll need to go to the closest Myanmar (Burma) embassy in person during its visa hours, fill out the paperwork that they give you and get a visa for Burma. Most people are issued a visa without a problem, but if you have a background in human rights, journalism, or any other subject that the government disapproves of, you might be denied. Needless to say, when stating your occupation, it's best to choose something fairly dull and innocuous like 'claims adjuster' or 'manager'.

Once you get your visa, you are granted 28 days within the country, starting on the day that you enter. At the time of writing, you may overstay your visa for a fee of $3 a day (payable to immigration when you exit), but this should be done with caution. Anything done outside of the official rules will cause you to be looked at with suspicion, so if you don't want to attract too much attention to yourself, it's best to stay within the 28 day limit. In addition, if you wish to come back to the country, it may be more difficult to get another visa if they see that you already have one overstay. With all of that said, though, I know of some travellers who have overstayed their visa up to 2 weeks without any problem.

Burma now has a growing number of ATMs in major urban centres, but in rural areas and smaller towns there are none, so plan accordingly. First, you need to plan how much money you are going to bring. A decent estimate for a budget traveler is around $40 per day per person, although you can certainly do it for less and quite definitely you can do it for more. Then, add a few hundred extra dollars for unexpected costs and incidentals to be on the safe side.

Now that you have an approximate budget, you need to get the bills to bring in, and not just any bills, either. You must bring in absolutely pristine US dollar bills, preferably of the $100 denomination. When I say pristine, I mean no folds, no tears, and no discolourations of any kind. If the bill does not look like it has just come straight from the printing press, it will be rejected outright or it will be exchanged at a lower rate. So, when you go to the bank to get your bills, be really picky about them as a bad bill can mean you are carrying around worthless cash. To keep your money flat, try putting it inside a heavy book or buying a large, hard wallet.

Once inside Burma, you will need to go through the fun process of exchanging your US dollars for the local currency, kyat (pronounced "jaht"). At writing time, $1 is currently fluctuating between 930 kyat and this varies greatly day-by-day and even during the day. You'll get the best exchange rate in the entire country at Yangon International Airport. Otherwise the easiest and quickest way is to exchange with your hotel, although they typically will give a slightly lower rate. A second option is official exchange kiosks dotted around Yangon. Once you get your piles of money, make sure to count it all before leaving.

Most people change the bulk of their money in Rangoon as it is easier and there are better rates than in the other cities. It is advisable, though, to keep some US dollars with you as most hotels, even budget ones, prefer that you pay in dollars.

There's no place safer to go in Southeast Asia than Burma, which is a good thing considering the bricks of cash you will be carrying around with you after exchanging your US dollars. Crime against foreigners is practically unheard of, especially violent crime. I do know of one foreigner who had his wallet stolen at a crowded rock concert in Rangoon, but outside of that, I haven't heard of any incidents of theft to tourists. If you're travelling alone, you may attract attention, but not in a bad way. Most people in Burma do not understand why anyone would decide to eat a meal alone, much less travel to a foreign country without a partner. You may even find that local people will accompany you when you go somewhere but this is purely a gesture of hospitality as they want you to not feel lonely.

Internet has become far more common through 2013 and many hotels and guesthouses now offer free WiFi (of varying quality). A second option is internet cafes which are are all over the place and are pretty cheap at less than $0.50 per hour.

Many sites are blocked, but if the site has an https version, it can be accessed (e.g. https://mail.google.com instead of http://mail.google.com). Gmail is the preferred email for everyone within the country, so if you want to be in contact with people while you are in Burma, now is the time to get a gmail account. In fact, Yahoo and some other email addresses cannot be accessed at all.

If you are impatient or have an absolute emergency where you need to use internet that is not slow, head to the most expensive hotel in town and pay for their WiFi. It won't be cheap (think $4 for a coffee) but it's the price you need to pay to get online sometimes.

I've never recommended making hotel reservations anywhere or anytime, except for Burma. In Burma, in order to take foreign guests, a hotel must be specially licensed by the government. As such, foreigners can only legally stay in a limited number of hotels. Now (in high season) with the influx of tourists into the country, Burma's officially-licensed budget guesthouses are quite often full every day and turning people away. So, if you can, it will save a lot of frustration to call or email ahead to your guesthouse of choice, instead of being rejected several times. This is especially important in popular areas such as Rangoon and Mandalay.

The most important thing to bring to the country is a flashlight. The reasons are quite simple: electricity goes out often and the roads and sidewalks boast large holes. Often the holes lead to streams of raw sewage, so unless you feel like taking a surprise dip in someone else's faeces, it's best to carry around that flashlight. I only warn you of this hazard because I've heard too many stories of people accidentally landing waist deep in murky liquids that can be smelled across the block.

As for clothing, this might be the place to retire your board shorts and BeerLao singlet. Burma is very conservative and is the kind of country where cleavage is regularly blurred out on television. For women, this generally means wearing outfits that cover knees and shoulders, even when it is searing hot outside. For men, you have a little more leniency but if you want to be respected more, a collared shirt will do the trick. Sandals are the preferred footwear for any outfit, so your flip-flops will do just fine.

I might as well talk about the elephant that is in every room in Burma: the military junta government. As a casual tourist, you are unlikely to see much of its heavy hand; in fact, you might go your whole trip without seeing one person in military attire. I've even overheard one tourist say "I don't see what the big deal is. Everyone seems happy here." Especially if you stay within the well-trodden Rangoon-Bagan-Mandalay-Inle route, it is very easy to get that impression. But realise that you can see only what you are allowed to see and you can experience only what you are allowed to experience. What really goes on behind the curtain lies behind walls that you can't see and in areas where you can't visit. 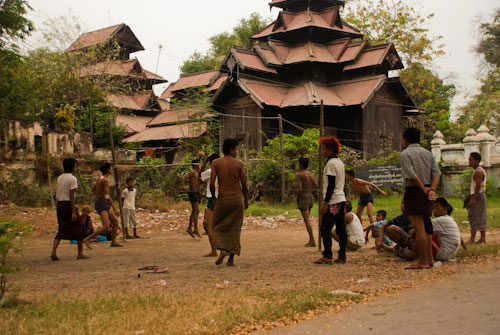 Talking about government-related topics is off limits to most of the people in Burma, so you are unlikely to get frank opinions from someone you just met on the street. What you will get are veiled references to Daw Aung San Suu Kyi, the spiritual leader of the opposition, and hushed tones about the state of their current life. Talking about the government in public is something of a local art form that you will probably not be able to pick up in your short time there. As a visitor, you should definitely not push anyone to talk about the government as it can not only get you in trouble, but it can land your local conversation partner in jail as well. As such, visiting Burma should be about meeting and interacting with people and not about learning about the unfortunate government to which they are subjected.

Also realise that some of the money that you spend will end up in government hands, despite any of your attempts to prevent it. There is a lot more gray than black and white in Burma, so sometimes even your 'independently owned hostel' is owned by someone with some military connections. It doesn't mean that the owner is a bad person, it just means that they do what they have to in order to run their business and sometimes that means greasing the wheels of the local official.

The good news is that by going to Burma, you are helping to provide some outside influence that has been missing for most of the last 40 years. Especially by going off the beaten track by just a little bit, you will be able to meet some people who are genuinely excited to see you because they have not seen a foreigner for so long.

Finally, where there is great difficulty, there is great reward. Burma is not the easiest place to travel and is definitely not a standard vacation destination. But, if you can see through the hardships, you will find a country of warm people, hidden temples and adventure that you won't be able to find in other parts of Southeast Asia.