Should you go to Burma (Myanmar)?

Should you go to Burma (Myanmar)?

So we're just back from our first trip to Burma/Myanmar -- a trip we waited 20 years to do. While we had hoped to come away with a clear view that you, too, should visit Burma, we still think deciding to travel here remains a very personal choice requiring careful research and consideration.

We'll be the first to admit that unfortunately nowhere in Southeast Asia is exactly a beacon of human rights and political freedom. All have their issues -- disappearances in Laos, blogger arrests in Vietnam, extrajudicial killings in Cambodia, and that's just for starters -- but Burma has consistently managed to hit rock bottom in this regard.

It's true that the junta is no more, but like many things in Burma, the reality is far from black and white. The elections of 2010 were wildly regarded as fraudulent, with the military-backed Union Solidarity and Development Party winning over 250 of the 330 contested seats (the National League for Democracy did not participate). Many of the generals now hold ministerial posts within the government -- they've just switched the khakis for more casual attire -- and regardless, the military retains 25% of seats in parliament. 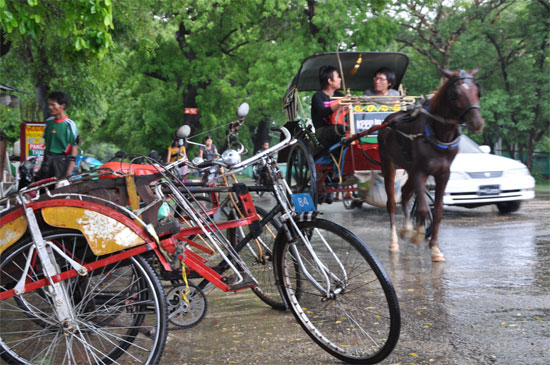 Burma still holds political prisoners, continues to use forced labour, has been alleged to be involved in ethnic cleansing with regard to the Rohingya and was named as the fifth most corrupt nation in the world by Transparency International. According to Human Rights Watch, Burma's human rights situation remains poor despite some noteworthy actions by the government toward reform and reports of using rape as a weapon continue to be levelled against the Burmese military. Where those generals really belong.

As during the junta days, the (now-ex) generals are surrounded by a bevy of hangers on, commonly referred to as cronies, who continue to grab land and enrich themselves at the expense of all others. The tentacles of these tycoons stretch across all facets of the Burmese economy, including tourism, banking, schools, energy, cement, drugs and weapons. Where in the past, travellers who cared could work to minimise the amount of money they gave to the government, today, with the ever-expanding crony network, this becomes far more difficult.

Yes, there are some simple ways to reduce what you pay into government coffers, by for example not using the train network, but it's quite unrealistic and unworkable for travellers to steer their money completely clear of the all-pervading cronies. Putting your money in the right hands.

And even if you think you've got your boycott list sorted out, you've got the 969 movement to deal with. This is a Buddhist anti-Muslim hate group that appears to be at least tolerated by the government. Led by a vitriol-spewing monk named Wirathu who spreads his message of hate via sermons and widely distributed CDs, many businesses, especially taxis, proudly display the 969 sticker. These are businesses that informed travellers should boycott.

Politics and religious affairs aside, visitors to Burma will come face to face with a very heavy-handed double-pricing system put in place for trains, buses and some hotels for foreign travellers. Your hotel may well be double the cost of that paid by a local. While we accept the we-pay-taxes argument when it comes to public services, we're not convinced by this when it comes to the private sector. A beautiful country - even in the pouring rain.

Significant stretches of the country require a government permit to visit on an organised trip. When we enquired at Myanmar Tour & Travel -- the government tourist agency responsible for permits -- about travel to Mrauk U in western Burma, we were told a permit was required and the tour cost (ex-Yangon) would be around $700, with the permit taking "five or so" days to arrange. Consider that a polite way of saying, "We don't want you to go there."

On the upside, every Burmese person we talked to supported foreign tourists visiting their country. By visiting, you'll be able to support small, family-owned businesses and the money is welcome -- particularly from those who make the effort to try and put it in the right hands. Also, by visiting Burma, and as with any country really, travellers are presented with an opportunity to better acquaint themselves with the situation on the ground. One would hope that an increased number of visitors to the country will help in some way to further open up the country for travel, in as positive a way as possible. Plenty to meditate on.

And what of the country's sights, people, food and so on? Burma is a completely fascinating place to visit. From the temples old and new to natural beauty and simply people watching on the streets, you won't be short of things to see and experience. We found the people by and large to be extremely hospitable and welcoming. And like everywhere in Southeast Asia, Burma boasts an excellent cuisine -- thick curries and tasty fresh noodles, often made by hand -- and it deliciously explains away the culinary transition from South Asia to Southeast Asia. Yes, there's a lot of oil free of charge, but it's easily eaten around, and the fresh salads and Shan noodles are delicious.

So if you do decide to go, what can you do to do it responsibly? Try not to use government services like trains, opting instead for private buses -- although note that some of these may be owned by cronies. If it's all getting too tricky to nut out - and it most probably, realistically, will -- then travel however you like, but do put aside some of your budget to make a donation to an organisation doing good work in the country. Try to support businesses doing good stuff, such as the Golden Harp Taxi Service in Yangon. Tourism Transparency has some suggestions for activities worth exploring. It is going to be a long haul.

What will we at Travelfish be doing? We'll have three writers there in the coming months and will be adding limited coverage for Burma to the site through 2013, primarily concentrating on the destinations most visited by independent travellers, and we'll re-assess the situation at the end of 2014.

We do feel that Burma is a destination that warrants further research by travellers in order to make an informed decision regarding whether they should visit or not. We waited 20 years -- if you're not sure yourself, give it a few more years.