The Enn highlanders are one of Burma and Shan State’s most fascinating ethnic groups. Many other minorities of southern Shan State may well have been encountered by visitors in Laos or Northern Thailand, but the Enn — sometimes written Ann or Eng — are unique to Burma and indeed to the Kengtung region. 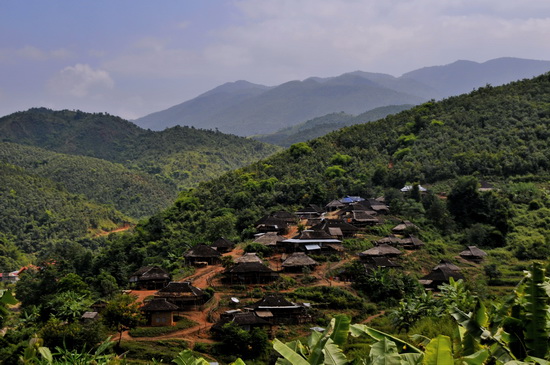 The Enn are also one of the most traditional ethnic groups found in Burma. The Enn are a part of the Mon-Khmer linguistic family, along with their neighbours the Palaung, Loi and Wa, and so have inhabited these hills for many centuries, pre-dating the migration of the Shan as well as the more recent arrivals of Sino-Tibetan groups such as Lahu and Akha. These days though they are restricted to just a handful of villages north and east of Kengtung town.

Villages are generally located on mountain slopes and consist of wood and bamboo stilt houses with slash and burn practised on hillsides and rice cultivated on any available valley floors. Religion varies depending upon the degrees of interaction with local Shan and penetration of missionaries, so you’ll encounter animist, Buddhist and even Christian Enn, although the latter two versions will contain strong animist elements. Probably as much due to problems with access and availability as choice, they traditionally eschew schools and medical care, causing, until recently, an horrific near 50% child mortality rate as well as high levels of illiteracy. Most Enn speak their own language and Shan but no Burmese. 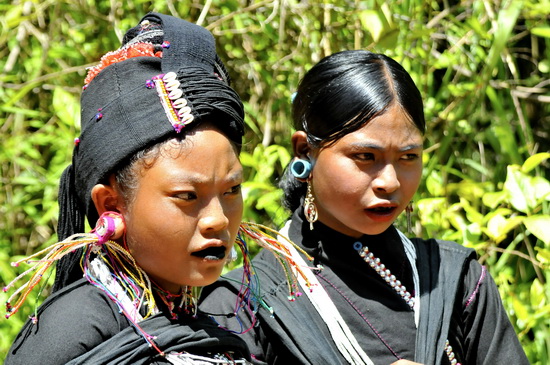 They are locally and famously known as the ‘Black Teeth Tribe’ due to their near universal, even from a young age, love of chewing betel. The dark red gums and rotten teeth effect is exaggerated by the wearing of a black lipstick made from a charred tree bark. Note also the distinctive elongation of the ear lobes caused by wearing large earrings — the girl above is sporting a section of blue PVC water-pipe in her ears for a trip to market. 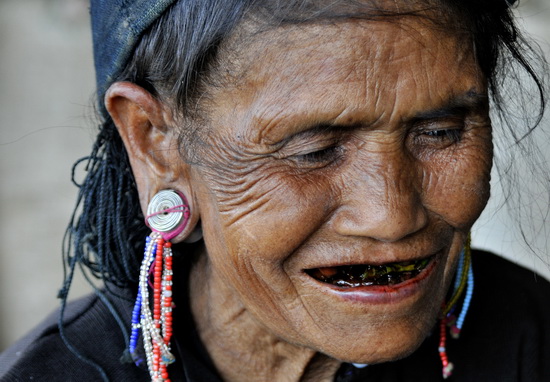 Enn woman, who has probably chewed rather a lot of betel in her time.

Unusually among 21st century minorities the village males — particularly younger ones — also like to display their traditional finery. Male costumes are dark blue in colour, hair is left long and jewellery is de rigueur along with headbands, and facepaint (a series of red spots) is favoured for a trip into town or special occasion. 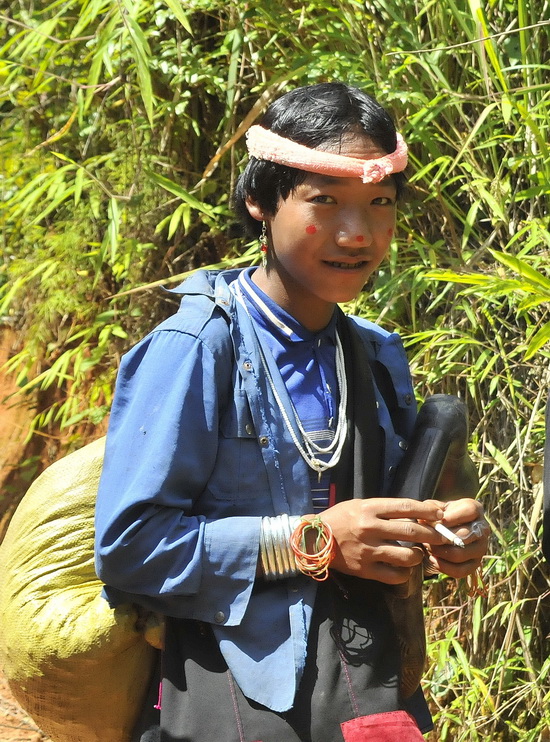 Fashion conscious Enn lad on his way to Kengtung market.

You can see large groups of Enn frequenting Kengtung market and their villages are common features of organised treks in the area. The people are friendly and inquisitive (and yes they will try and sell you their handicrafts), but Enn etiquette, particularly in the more traditional villages, is complicated, so we would advise against visiting without an experienced guide. Note that many Enn are very shy, so please do ask politely before taking any photos. 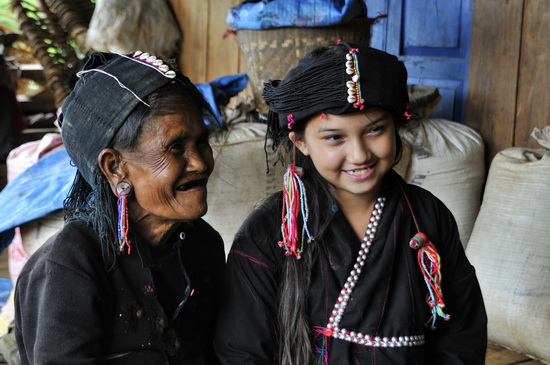 Dressing up visitors in traditional finery is a fun part of the show.

Furthermore, as with any hill-tribe visit, linguistic problems will mean you’ll have little or no interaction beyond taking a few photos and purchasing a few knick-knacks — but if you’re accompanied by an experienced guide, a visit to the Enn can be a genuinely fascinating experience.