A selection of classic Burmese dishes

A selection of classic Burmese dishes

Burma has a rich, varied and unique cuisine but perhaps due to a paucity of foreign visitors over recent years, Burmese food is little known outside of the country. If you’re planning on travelling here, it’ll pay to know a few of the most famous and common Burmese dishes that you’ll come across so you can dive straight in. Here’s a selection of our favourites. 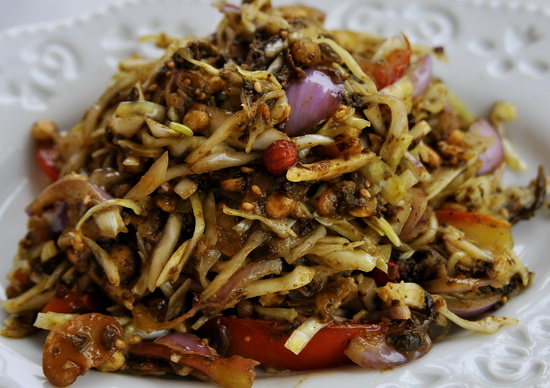 Lahpet or tea leaf salad
If any dish from Burma is known outside its borders, it’s likely to be tea-leaf salad, or laphet in Burmese. It’s the national signature dish if ever there was one. We’ve not come across a similar salad elsewhere in Southeast Asia (perhaps someone will correct us), and while the sour flavour of the fermented tea-leaves can be a surprise at first, many travellers acquire a taste for it and return home raving about it. The ingredients are ubiquitous in Burmese markets: dark green mashed leaves and an assortment of fried beans and nuts — you could knock up your own lahphet in two minutes with the addition of some diced tomatoes (some versions have sliced white cabbage) plus chillies if desired and a spoon of peanut or perhaps sesame oil to bind the ingredients. Note that for locals the salad is more often a snack than a main dish and you’ll see complementary offerings beside green tea in homes or chic souvenir shops, and it may be brought out as an after-dinner snack in upmarket restaurants. Such ‘posh’ versions are often served in purpose-made, segmented lacquer dishes as seen below. Free for visitors at a Bagan handicraft shop.

Mohinga or Burmese fish soup
If you could start the day with something called a ‘full Burmese’ then mohinga would be it: it’s the Burmese version of bacon, eggs, sausage and beans all rolled into one. This is the classic Burmese breakfast and indeed the rich, fish-based noodle soup is a great way to start the day and so popular that it even features in many hotel buffet breakfasts — a couple of bowls of this filling soup should keep you going well into the afternoon. Recipes vary considerably from region to region and really any fish will do, though catfish is the classic choice. The broth is thickened with flour — often chick pea — and flavourings could include garlic, ginger, onions, banana stem and lemongrass, with coriander, dried chillies, hard boiled eggs, crispy chickpea fritters and lime generally served on the side. The noodles are the thin, rice variety. Even in tourist hotels we’ve found it hard to find a bad mohinga but the more adventurous can find bowls in most markets and local coffee shops for as little as 1,000 kyat. There are possibly echoes of Malaysia’s laksa here with the fish broth and noodles, but it’s a very typical dish. Shan noodles
While the Burmese can be as chauvinistic as anyone about their own cuisine, Shan-style noodle soup long passed its state borders and is both widely found and highly esteemed throughout much of the country. Mind you there are nearly as many variations on Shan noodles as restaurants that sell the dis,h so it’s not simple to pin down the classic recipe. The only common denominators seem to be the name and the fact that they’re popular. The noodles are usually flat rice ones, although egg noodles are favoured for the dry Shan noodle salad variant shown below, which could easily be mistaken for a plate of tagliatelle. Simple but delicious! Continuing with the Italian feel, the soup option of Shan kauk swe is frequently served with minced pork or beef in a tomato sauce – vaguely bolognaise-ish, though chicken is also popular. Crushed peanuts, soya beans and even sesame seeds may be added, providing a more distinctly Shan taste. While not unheard of outside Burma (Asian pennywort, centella asiatica, is used to make drinks in Thailand and features in Indian Ayurvedic medicine), it is far more commonly consumed in Burma than elsewhere. Pennywort salad is a regular feature on restaurant menus and generally popular with visitors. Pennywort itself is a leafy herb with a somewhat bitter taste, perhaps slightly resembling cress and in min kwa yuet is combined with lime juice, peanuts, fish sauce, sesame seeds and optional chillies. It’s a tangy, light and refreshing salad with apparently plenty of healthy properties too. This is a sneaky choice on our list since it’s far from being one of the country’s most common dishes, but it’s a personal favourite, highly recommended and widely available. It’s common where fresh fish abound, and the above photo was taken on Inle Lake. If you have tried and enjoyed nga tong, it’s dead simple to make yourself. Lightly fry a white fish fillet then roughly crush it into flakes with a fork, let it cool and add crushed garlic, finely chopped chilies and salt to taste and that’s it! Serve with a good sized squeeze of fresh lime. It’s not a main dish but served as a nibble — and with some poppadoms or crackers, it’s sublime.