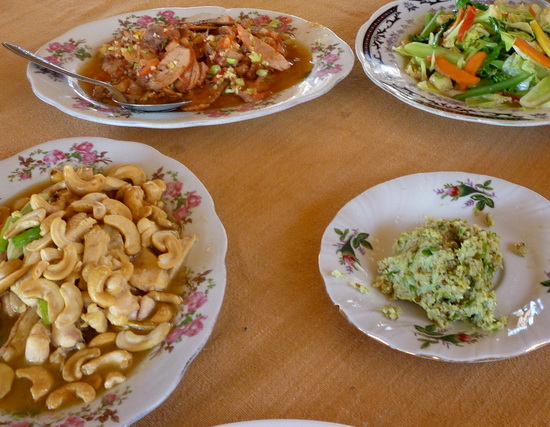 Could almost be anywhere in Asia, but the flaked fish and lime paste plonks you in Burma.

Ethnic Indian-run eateries are found everywhere serving up familiar biryanis, nans, chapatis and so on, while samosas are a staple of coffee shops the length of the country, and flat bread and dahl is a common breakfast option.

However as a tourist, much of the purported “local” food you’ll come across is Sino-Burmese and the tour group restaurants of Inle and Bagan, and many hotel and guesthouses will offer the generic Asian classics such as chicken and cashews, beef with ginger and sweet and sour variations — probably on the basis that these dishes are familiar to the majority of visitors and that they are often considered more palatable to more conservative elements than the somewhat more unusual flavours of classic Burmese cuisine.

Yes, Shan and Mon dishes can have similarities to their Thai counterparts, but traditional Burmese fare is different from anything else in Southeast Asia. Shan meal in a Mandalay restaurant

Strong and unusual flavours can feature in the local cooking. The powerful fish paste — ngapi in Burmese or kapi in Thai — may be familiar to those who’ve visited Thailand and Cambodia, but the pickled tea leaves and fermented soya beans for example aren’t common elsewhere. Some of the most popular local vegetables are also rarely eaten elsewhere, such as the ubiquitous roselle leaves — which give a tangy, slightly lemony flavour to stir fries, soups and curries — and the cress-like pennywort leaves, which appear in salads. 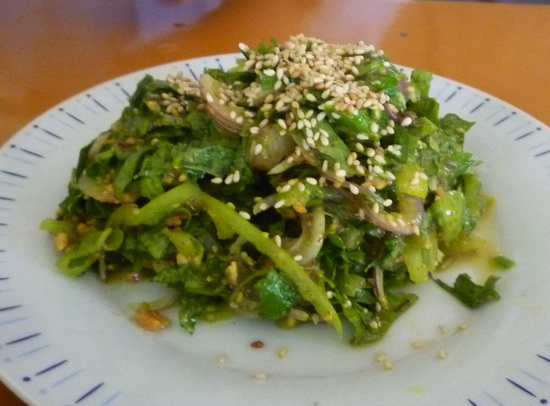 Curries are closer to Indian style than for instance the soupy, coconut milk-based Thai or Khmer versions, but are generally quite mild chilli-wise. The preponderance of mutton is striking, though considering the number of sheep we’ve seen in Burma, it’s possibly actually goat. Otherwise, as with all Southeast Asian cuisines, fish is a traditional staple.

Another feature that makes Burmese dishes stand out from other Southeast Asian food is the widespread use of pulses and beans. We’re guessing it’s the Indian influence, with lentils, soya beans, kidney beans, peanuts, sesame seeds and so on forming an integral part of local cuisine. It’s odd to see the importance of soya beans (fermented or fresh not just in sauce) in say Shan cooking compared to their total absence among their Lao or north Thai cousins’ options.

Again because of ethnic diversity, but also corresponding to geographical and climatic variations, Burma’s regional cuisine is pronounced and varied. Intha food from Inle Lake is naturally high in fish but also strongly features tomatoes, since that’s the main crop grown on the lake’s floating gardens. Local lunch in Bagan with tomato and peanut salad.

The dry zone around Bagan, as well as being good for thanaka, sees widespread peanut and sesame cultivation, so again they appear frequently in local specialities.

Rakhine food is logically heavily Bengali influenced while southern food, as to be expected, uses a lot of seafood products as well as more coconut. Shan food is popular throughout the country and you’ll come across Shan eateries in Mandalay and Yangon (Rangoon) as well as in Shan state itself. Other than the aforementioned emphasis on soya beans of all kinds you will see some similarities with Thai food and indeed Shan food can also be very fiery.