The beige-yellow splodges, swirls and spots on cheeks and foreheads means one thing: you can only be in Burma. 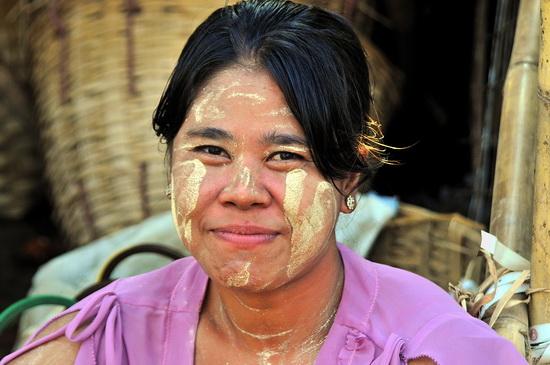 Painted on to add prettiness.

Thanaka comes from the bark of the thanaka tree, though other species are sometimes used. The bark is ground to a powder then mixed to a paste with water before being applied with fingers, although stencils may be used for more complicated designs. 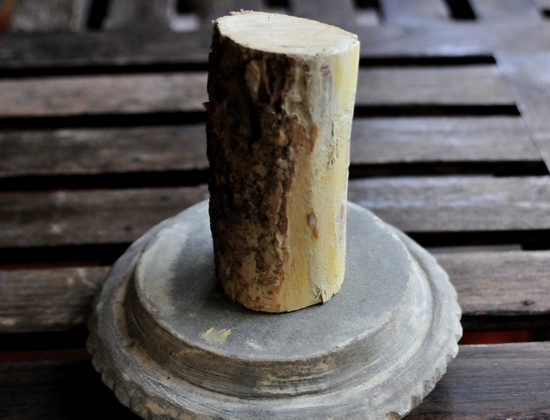 Patterns vary from delicate leaves and flowers or intricate swirls through to random blobs resulting from the slap-it-on-all-over technique, though bear in mind it’s generally applied as morning make up and after working several hours in a sticky market the thanaka may not be looking its best. 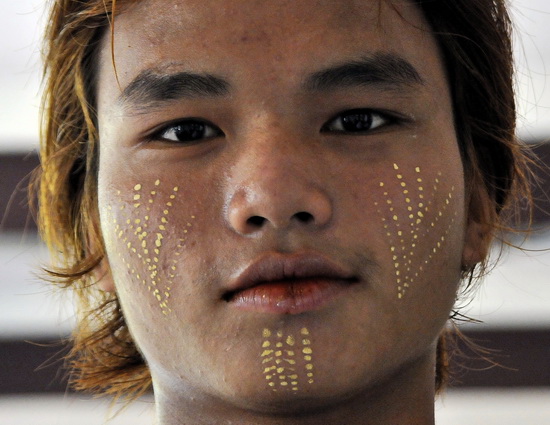 Guys do it too.

The majority of Burmese women wear it as do quite a lot of the guys, especially younger ones. The reasons for and benefits of applying thanaka are almost as numerous as the patterns themselves. They include, in no particular order: the powder has a cooling effect, it provides protection from the sun, it deters mosquitoes and insects, it’s thought to prevent acne, it makes the skin smooth, it smells nice — it has a sandalwood-like fragrance — it acts against fungal infections, and last but not least — it looks good! In short, it’s apparently an all-in-one Burmese cosmetic and dermatological cure-all. The splash it on all over technique

Note the bright yellow effect of this Muslim girl in Moulmein above — it’s created by adding saffron to the paste.

Thanaka is popular with all ethnic and religious groups and is grown in most parts of the country, though some debate exists over the source of the best bark. The sticks or small logs sold in the markets consequently vary considerably in price according to their provenance, but the drier, central area is generally considered to be the best source. Sagaing, Magwe and Bagan are reputed regions though Taunggyi is up and coming — maybe they need a kind of thanaka appelation controlee system?