I live in quiet dismay at the latent school marm within me. She’s a desiccated, dictatorial old bag, and once even gave a friend of mine a sharp chop to the base of her spine to make her stand up straight. I’m not sure which of us was more surprised. Luckily, the school marm doesn’t get out often and I haven’t seen much of her since I went back to university in Dublin a few years ago, when she spent the whole year quietly exclaiming “Holy God, she must be freezing!” at the sight of fellow students whose concepts of subtlety clearly needed some work (a first sign that I was probably getting old).

But she burst out in full “Well I never!” form on a trip to the supermarket recently, kicked into life by the now annoyingly common sight of a guy standing over the dairy fridges wearing nothing but shorts and flip-flops. He was sweating on my yoghurt. Yeuch! As he may say himself "Epic fail, dude!"

And even though the school marm is a desiccated, dictatorial old bag, it doesn’t mean that she doesn’t sometimes have a point. I enjoy the sight of a ripped male body as much as the next woman and gay guy. But there is a time and a place for everything and even in the case of such a fine six-pack, the supermarket is definitely not it.

The same applies to restaurants and bars. It’s usually very easy to tell the difference between a place that is so relaxed that no one cares if you’re dressed or not, and a place that would really prefer it if you kept your shirt on. You’d think that not many would be so intellectually impaired that they can’t tell the difference, but still it happens. These fellows shouldn’t be surprised if management start speaking very slowly while asking them to get dressed or leave. Needs to exercise some thought.

A friend of mine has a slightly more mischievous approach to inappropriately dressed visitors. As a manager of a restaurant in the Pub Street area, she watched bemused one day as two women cantered down the road wearing acutely unambitious shorts and bikini tops. Nudging her wide-eyed work colleagues, she whispered “sex workers”, a conclusion they had already reached as this is just how sex workers in Cambodia dress too. Her team nearly had to be passed the smelling salts when another girl came in wearing a dress whose entire relevance was up for question since it barely skirted the arse which it was in any event too transparent to conceal. Someone forgot to tell her there’s no beach in Siem Reap.

We know that they probably weren’t really sex workers on the street, or an utterly beyond redemption raving narcissist in the supermarket, but I’m sure there are plenty of other ways of advertising availability for sex without freaking out the locals or making me want to hurl into my shopping basket. Maybe a big sign, or a T-shirt? Are they still in their pyjamas? (This is a temple. A temple.)

Cambodia is a country in which modesty is valued. Visitors might not agree with that viewpoint, but while here we are under an obligation to respect the moral codes that don’t violate our own ethics. The capacity to parade around half-naked is not in itself an ethic or, incidentally, liberation. We expect the same of visitors to our own countries.

I wonder if the young women who demonstrate such bare-arsed cheek would be so happy if people from their own communities were to mistake them for commercial sex workers too and, if not, why is it okay here? It is deeply ironic to overhear the scantily dressed babbling loudly about how much they love Cambodia, and how wonderful they find the people, while they publicly demonstrate such a threadbare regard for the opinions of those very people.

But the weirdest and worst is seeing people traipsing around the Angkor temples wearing not a fantastic amount more than what nature bestowed them. Since they came to Cambodia to see the temples, it’s probably fair to conclude that they do realise that these are religious buildings, sacred to the people of Cambodia and to the monks and local people for whom Angkor Wat is still a living, breathing place of prayer. My brain can’t cope with trying to make the connection between that knowledge and the decision to wear hot pants and a tube top. Maybe the early morning rise muddles up thought processes. 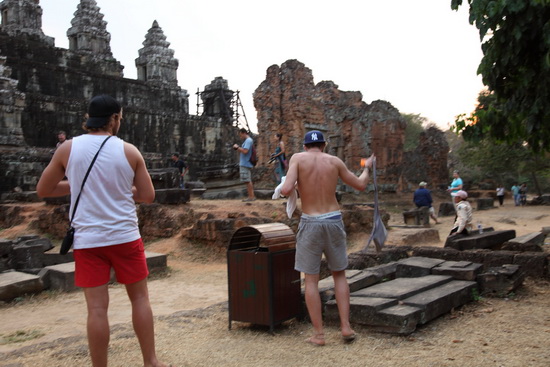 Picture this if he were in St Paul's Cathedral, London, or St Patrick's in New York...

No one’s asking anyone to don a burka, but out of a basic sense of respect it can’t be so hard or unendurably limiting for women to cover upper arms and legs for a day or two. And for the blokes, do keep your shirt on. It’ll surely make us poor deprived women appreciate it all the more when you rip it off again. Just not in the supermarket, okay?