The United States celebrates 10, while England usually has eight. In the league table of public holidays, they are merely amateurs compared with Cambodia’s 28 days of legislated relaxation. Brits may have got a bonus day this year for their Queen holding down a job for a long time, but Cambodians celebrate the King’s coronation and birthday every year, and include days for the King Father and the King Mother.

Generally, public holidays don’t interfere much with visitors’ travel plans, other than the bonus of some riverside fireworks in Phnom Penh. But as the rains have their final tantrums before crying themselves out, two of the most important festivals in the Cambodian diary — Pchum Ben and Water Festival — may have an impact on tight schedules. 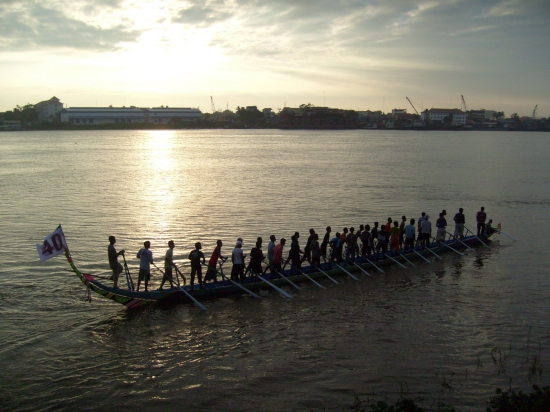 The Pchum Ben festival is observed for 15 days, culminating in three days of public holiday, this year October 14 to 16. The first 14 days involve food offerings to monks at pagodas, but the final day is the busiest, providing food for ancestors and financial contributions for the upkeep of wats. If you’re interested in religious life in Cambodia, this is a good opportunity to observe and respectfully participate.

Other than groups of women dressed in their pagoda best clutching flowers and dishes, it’s unlikely you’ll notice anything different at the beginning of this festival. Come the public holidays, however, banks and government departments will close, and many restaurants and guesthouses run with a reduced staff as workers return to their home provinces. Don’t be surprised if food choices are limited or what seem like easy requests cannot be fulfilled. The phrase “Cannot, Pchum Ben” is a catch-all phrase to explain delays with visa extensions, a lack of chicken dishes or the unavailability of your chosen beverage. Definitely not taken during the Water Festival.

Phnom Penh can get so quiet during Pchum Ben that visitors have been seen wandering around with confused looks on their faces, unable to find a tuk tuk and wondering what all the fuss was about the traffic. Six weeks later, the capital gets full to bursting during the Water Festival (27-29 November) and you can’t move for excitable revellers discussing boat racing tactics. As last year’s festivities were cancelled due to disastrous flooding across much of the country, this year’s celebration is likely to be even more popular.

After each day of boat races, a flotilla of lighted boats floats serenely down riverside in the evenings and there’s a variety of concerts in public spaces. Areas of the city are closed to motor traffic, and the streets leading back from riverside can become very busy. It’s worth double checking the location of your guesthouse to ensure you won’t be hauling your backpack through crowds that even the noisiest tuk tuk horn can’t part. Finding a quiet spot to relax can be tricky.

Travelling around the country can be a little more challenging during both these festivals, as roads get busier and bus tickets are more sought after. If your itinerary doesn’t allow for an extra day here and there in case of unexpected delays, you may need to revise your plans. Many Khmers and expats living in Phnom Penh use the Water Festival as an excuse to exit the city. This holiday season is one time when it does pay to book ahead for accommodation, particularly at the beach and smaller towns with limited guesthouses. A couple of years ago during Water Festival, Sen Monorom was turning away visitors relying on scoring a bed on arrival, and yours truly allegedly got the last room in town.

If those holidays aren’t enough for you, three individual holidays fall between Pchum Ben and Water Festival: a double whammy of royal birthdays on 29 October (for the King) and 31 October (for the King Father) and Independence Day on 9 November. The perfect excuse to grab a rooftop cocktail or hire a boat and enjoy some fireworks in comfort.