A guide to social etiquette in Laos

A guide to social etiquette in Laos

With their laidback attitude and a deep aversion to confrontation, the Lao are pretty tolerant of foreigners failing local social etiquette. Yet while they may not vocalise their discomfort, they may still form negative impressions of visitors who unwittingly break cultural taboos, often bearing their resentment in silence until an opportunity presents itself to be most unaccommodating toward the offending party. Here are a couple of tips to keep you from embarrassing yourself — and others. 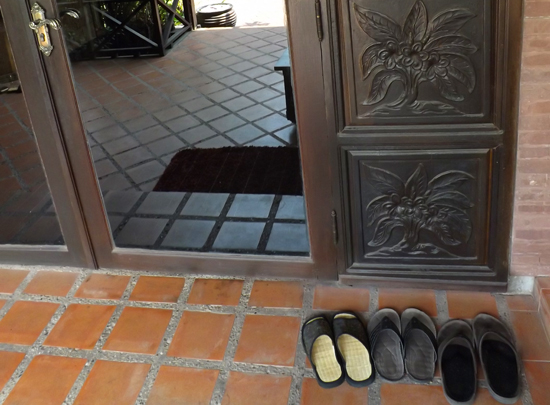 Always remember to take off your shoes.

The Lao language is quite direct and does not encompass many polite phrases. While ‘thank you’, kop chai, is widely used in interactions, the word for ‘please’ is so rare, it’s only ever used in customer service recordings or when speaking to high-ranking government officials. The phrase ‘excuse me’, koh toht, is rarely uttered. People often bump into each other in crowded spaces like markets or tuk tuks, but usually don’t feel a need to excuse themselves and instead consider it a natural part of being in close proximity to others.

Possibly the most important phrase to remember is the standard Lao greeting of sabai dee, literally meaning ‘it goes well’. It can be hollered across the street at someone, but when being introduced it is accompanied by a formal gesture called the nop — press your hands together as if praying and bow your head slightly. This is somewhat the equivalent of shaking hands, so it’s not always necessary.

If you’re being introduced to someone new, do use the nop. A handshake is not traditional, but often also acceptable, especially in Vientiane. Kissing someone’s cheek or hand will certainly overstep a Lao person’s boundaries and especially make women very embarrassed.

Kissing in public is frowned upon, and holding hands is the most intimate level of romantic interest that is acceptable to express in public. Overt sexual behavior is not welcomed and neither is showing too much skin. While short shorts and see-through tops are fashionable among Lao girls, you generally won’t see them in swim-wear, even when they’re swimming; men swim in trunks. It’s generally accepted that tourists will swim in swimwear. It’s not accepted when tourists wear their swimwear walking around the streets, although for a while it was fairly popular in places like Vang Vieng. If you walk into a shop or a restaurant in your swim trunks or a bikini, the staff probably won’t say anything, but they’ll consider this behavior to be vulgar; they’d much prefer that men kept their shirts on and women covered up their curvy bits.

The one place where rules of dressing modestly are strictly observed is in temples. Women’s shoulders and thighs should be covered. If you’re temple-gazing, it’s a good idea to bring a wrap and wear bottoms that reach the knees. Additionally, women must behave modestly when interacting with monks and are strictly prohibited from touching them or their robes. Rules for men in temples are a little more relaxed, but muscle tees and tattered clothes are considered disrespectful apparel.

Some other carefully observed Buddhist customs relate to the belief that the head is the most sacred part of the body and the feet the most impure; touching the top of someone’s head is therefore a strong personal violation, as it is the crown of their spiritual body. Likewise, putting one’s feet up onto furniture, or using them to point at something, are very rude gestures.

Entering someone’s home with dirty shoes or feet is rude behaviour; likewise always wear shoes when outside. Many shops will also ask you to take off your shoes. If you’re in doubt, ask, and for your convenience, avoid wearing shoes with laces when you’re shopping.

A quirky difference in gestures is that it’s rude to point your fingers upward. While waving hello is fine, people will beckon you with their hand pointing down. The Lao only point their fingers upward when calling their pets or motioning to someone with the intention of insulting them. Even the ancients greeted with a ‘nop’.

The Lao concept of personal space is far more lax than in the West. Being intimately wedged against a stranger in public spaces is of little concern, and taking the liberty to pinch a child’s cheek or absent-mindedly stroke someone’s arm while talking to them is a common sight between people whether they’re old friends or it’s their first encounter. Some people may even pat a particularly rotund belly, as joking about weight is entirely acceptable. Yet commenting on someone’s dark skin will be considered an insult and girls will find it just as upsetting as if you called someone fat in the West.

Overall, good manners are generally reflected less through token gestures, and more through the attitude with which you approach people. If you’re smiling, calm and at ease you will be met in kind; if you approach people with a sour face, crossed arms and speak to them in a loud aggressive tone, Lao people will probably wonder what’s wrong with you.

Keeping your cool is one of the most important cultural rules to follow while travelling in Laos; another important rule is to not try to talk politics. Attempting to elicit criticism from a Lao person about their government is a quick way to alienate yourself.