Eating delicious fresh fruit is one of the great joys of travelling in Southeast Asia. Abundant and refreshing in the tropical heat of the day, a huge range of options can be found — small and sweet, cumbersome and stinky or large and luscious. Laos has them all. Here’s your guide to what you’ll find here. When in a restaurant, you’ll usually be served a combination of papaya, banana, pineapple, and either melon or mango, depending on what’s in season. Motorbike side-carts with pre-cut iced bags of fruit are common and convenient; simply flag one down, and point to pick. They often sell both ripe seasonal fruit and under-ripe fruits like mango, to be dipped in a reviving mix of salt, sugar and chilli powder. Wooden carts parked at the side of the road are also easy to come by, and will always offer seasonal varieties priced by the kilo. The prices are often inflated somewhat for foreigners, so feel free to haggle. 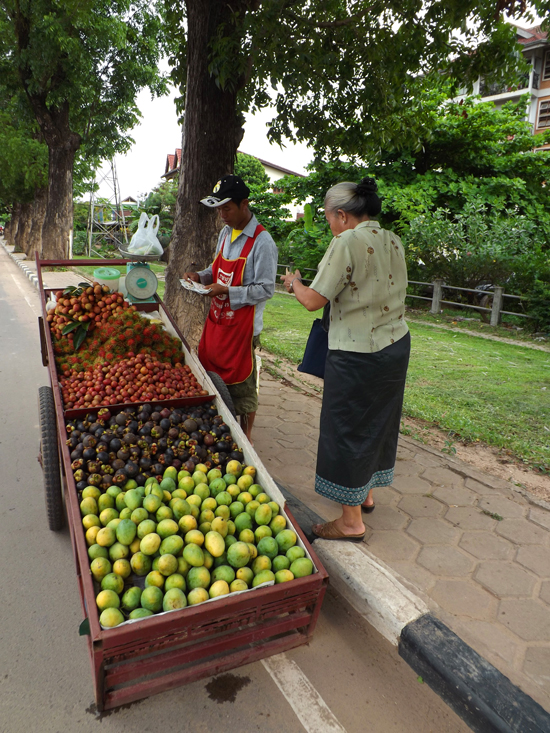 Sweet deals at the fruit cart.

The markets offer the greatest variety of fruits and the most competitive prices. Fruit is priced by the kilo — simply lo in Lao. Neung lo is one kilo, keung lo is half. Be careful not to say lo keung, as this’ll get you one and a half kilos. Bananas are the only fruit not sold by the kilo, with a bunch costing around 5,000 to 10,000 kip.

Apples, grapes and Asian pears are available in many places, although these are not native to Laos and are instead imported from China. They tend to be expensive and sub-standard, so going for local species, like year-round-available papayas, is usually a better choice.

During the cool months from late November to February, citrus is in season, and pomelos are sold everywhere. This cousin to the grapefruit is much larger, with thicker skin and less intense flavour. The segments need to be individually peeled, but many places sell them pre-peeled for 10,000 to 15,000 kip — just check that they’re fresh. Tangerines are also in season during these months, and the smaller they are, the sweeter and juicier they are. These tend to be very cheap and travel well. 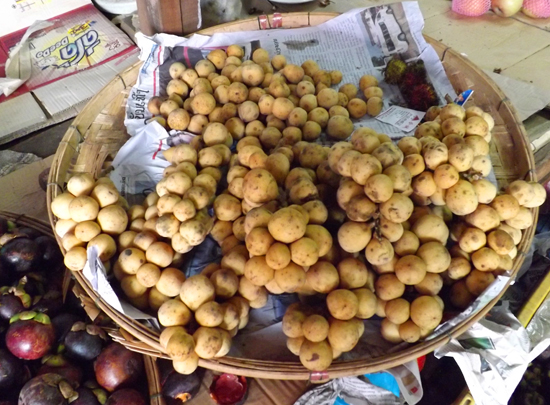 The high season for fruit is April to July. It begins with longon, a small round mustard-coloured relative to the lychee. Starting May you’ll find honey mangoes at around 12,000 kip, which are so creamy you can simply cut them in half and eat them with a spoon. Mangosteens are another must-try. These small purple fruits have tough skin, but the little white segments inside have a sweet flavour like no other fruit. The best mangosteens aren’t too hard; the skin should give a little bit when you squeeze it. Lychees are sweet and juicy, while their techni-colored spiky cousin, the rambutan, is meatier and not as sugary. 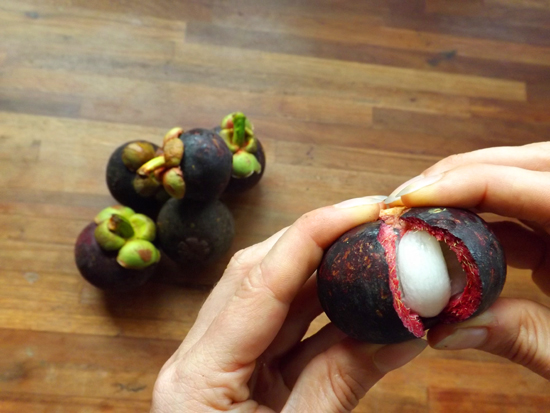 Open the mangosteen by pulling the top off and gently squeezing until it cracks down the centre.

Dragonfruit is available most of the year. This flamboyant fruit wins for best presentation, although its flavour is a little less impressive and can taste like a bland kiwifruit. Pomegranates are available, but tend to be lighter and sweeter than the deep red tangy ones available in other parts of the world. Pineapples are also available all year, although between April and July they’re easily found, often sold from trucks on the side of the road for as little as 3,000 kip apiece. For a few thousand kip more, most places will cut them up for you with impressive geometric precision. Melons are available most of the year, mostly watermelon and also honeydew and cantaloupe. They tend to be rather watery, and you’ll be hard pressed to find one with much flavour. In shake form, however, watermelons are a seriously good source of refreshment.

Certain fruits are more of an acquired taste. Tamarind has a wonderful tangy aromatic flavour that makes it a popular ingredient in sauces and soups. Encased in brown pod, this fruit is intensely sticky and sweet with several pits in each pod. Sapodillas are egg-shaped brown fruits, with a strong syrupy taste resembling a cross between a pear and a date. They’re intensely sweet and tasty blended with coconut in a shake. Jackfruit is the biggest fruit in the world. It naturally segments into stringy yellow chunks that are sweet with a sulphuric aftertaste that leave some unimpressed. 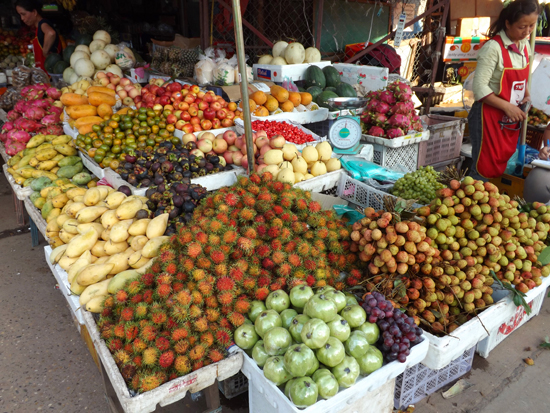 Finally, of course, there’s durian. Renowned for its controversial smell, it is nonetheless called the king of fruits, and people tend to feel strongly toward it one way or another. Emitting a stench of something wholly rotten, encased in a spiky green skin, its rich and creamy flesh is like a toasted marshmallow seasoned with onion, irresistible to some and utterly repugnant to others. While sold in chunks similar to the jackfruit, your nose will let you know what you’re looking at.

With any fruit you buy whole, wash it before cutting it up; peel it as well. If you leave it in a plastic bag for an extended period of time, put the bag in a sink of water or ants will likely sniff it out. A final piece of advice: don’t fall asleep with fruit juice on your face.