Loy Khatung: the night of the Naga

Loy Khatung: the night of the Naga

Every year the Lao observe Buddhist Lent for a three-month period, in which they (attempt to) abstain from alcohol and meat to honour the Buddha’s months of ascetic contemplation before he reached enlightenment under the bodhi tree.

The end of this period, marked by the first full moon in the 12th month of the Buddhist calendar, sees the serene holiday of Loy Khatung (also known as Loy Krathong in Thailand) celebrated to give thanks and respect to the Naga, the sacred water serpent that inhabits the many rivers of Laos. In 2012, the holiday falls on Wednesday. Candles are placed on a piece of banana tree trunk and decorated with flowers to resemble a racing boat.

Most every house features lit candles either hanging or placed on long boat-shaped arrangements. It can be a magical experience riding through the dark alleys of Laos lit only by hundreds of candles.

Offerings are given to the Naga in the form of khatung, beautiful arrangements of candles placed in folded bamboo leaves and flowers, either made or bought from one of the many vendors at the roadside on the day of the celebration. Khatung are launched from numerous spots along the rivers, the downtown Vientiane waterfront being the most popular. This is also the time Vientiane gets a little crazy boat races and other festivities; what appears to be nearly the entire population of Laos gathers at the waterfront to mingle among the various booths and bask in the mayhem. 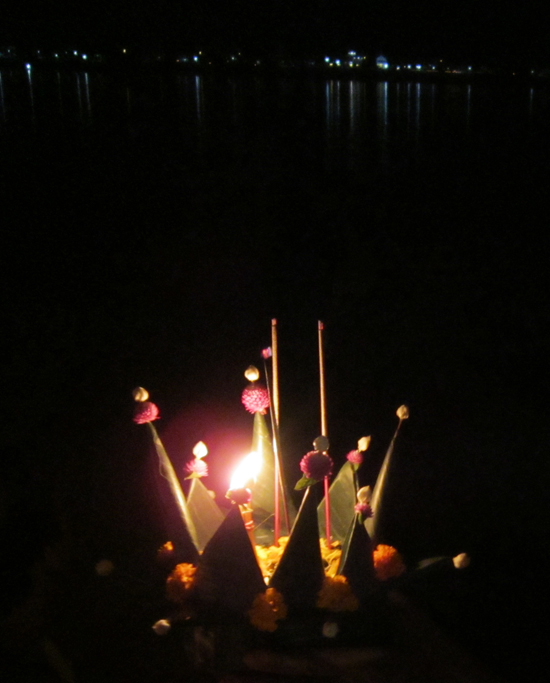 Certain places at this time experience bang fai phaya nak, “naga fireballs”, where great balls of fire shoot out of the river high into the sky. Some scientists say this phenomenon is from naturally occurring methane bubbling out of the riverbed which spontaneously combusts upon reaching the surface of the water. The Lao say they’re from the Naga inhabiting the river. Naga fireballs occur mostly in the Lao village Ban Hai, a small town on Route 13 South, near the entrance to Phu Khao Kwai national forest and in Nong Khai, Thailand. A monk lights candles at the temple, as people arrive for Loy Khatung.

For those with a motorbike and a desire for a smaller scale of celebration, seeking out one of Laos’ many riverside temples is a great way to experience Loy Khatung.

In villages everyone will gather around 19:30 to send their candles into the river, while monks chant in the background. Ban Kheun, two hours outside of Vientiane and home of the Lao Zoo, is one such spot. Another option is to take Tha Deua Road 20 minutes out of Vientiane until you reach the so-called clocktower roundabout, which doesn’t have a clocktower but is undoubtedly a roundabout. Turn down the small dirt road on your immediate right and continue all the way to the river, where you’ll find many temples lining its bank. Be prepared for no one speaking any English; but the Lao have a way of overcoming language barriers with smiles and a neverending desire for everyone to enjoy themselves.

A couple of years ago, a friend and I decided to take a road trip into the Lao countryside for Loy Khatung. With no particular destination in mind, we set off with a coin and flipped it at every intersection to see where we’d end up. At dusk we were approaching Ban Hai. As we drove across the town bridge, our motorbike started acting up. The bike gave out as we rolled up to the nearest mechanic, so we deposited it with him and went to freshen up at a guesthouse up the road. At the riverbed, people gather to light the khatung and place them in the water.

Celebration was in the air and several people told us to go down to the river. Villagers were partying at little restaurants all along the road, but there were no streetlights and the night was black. As we approached the river we saw lights flickering in darkness.

We gazed over the edge of the bridge and saw hundreds of candles floating on beautiful arrangements gliding with the current. The village was gathered in a nighttime picnic on one side of the riverbed and we decided to join them. We bought a khatung, lit it and sent it into the river as we made a wish. We were then beckoned to join a group of farmer women to join them for some chicken feet, Lao cao (rice whiskey) and a night of Lao dancing in celebration of the famous Naga.