The indigenous people of Sarawak

The indigenous people of Sarawak

Other than being famed for its jungle, Sarawak is also known for its indigenous communities and for good reason; there are more than 45 recognised ethnic groups. Between them they make up more than half of the overall population and it is this diverse range of cultures that makes Sarawak one of the most fascinating places to visit in Malaysia. 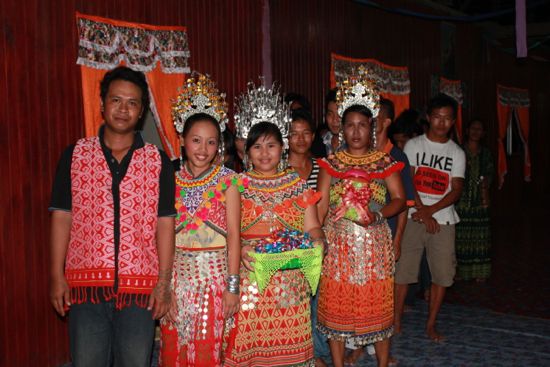 The catergorisation of these indigenous communities is a little confusing. Where some people use the collective term ‘dayak’ to describe all the indigenous communities; others eschew this term as it is too broad for such a diverse range of people. So to clear up any confusion, here we will only use the term dayak for two indigenous groups, the Iban and the Bidayuh.

The Iban, or Sea Dayaks, are the largest indigenous group in Sarawak and it is likely that you’ll have heard of them as they are infamous for three things; tattoos, raucous celebrations and headhunting. In reality, their culture is much more complex than this and life isn’t just one massive party. The Bidayuh, also known as the Land Dayaks, are not actually one tribe; Bidayuh is a collective term for a group of indigenous communities who often have no common language. In fact, it’s pretty common for Bidayuh of differing communities to communicate in either English or Malay as their languages are so different.

The remaining group are the Orang Ulu, or upriver people. This term encapsulates 27 very different ethnic groups that live (you’ve guessed it) upriver in the remote regions of the interior of Sarawak. Included in this group are the Kayan, Kenyah, Penan, Kelabit and Lun Bawang, all of whom traditionally resided in the interior although many have now migrated to towns such as Miri and Bintulu to find work. It is not uncommon to find Orang Ulu who are polyglots, such is the closeness of their existence in the interior. While we do not claim that this is a comprehensive list of all the indigenous people who live in Sarawak, it should shed some light on the rich array of cultures that populate it and provide a good starting point for further reading and research in preparation for you travels here.

The river photo was taken in the 1960s or 1970s by Christian missionary Phyllis Webster; thanks to her for letting us use it here.