How to save money while travelling in Borneo

How to save money while travelling in Borneo

Travellers coming through Malaysian Borneo often complain that it is much more expensive than the rest of Southeast Asia. Travel and accommodation can often be double the prices of West Malaysia and public transport in Borneo is often non-existent, forcing travellers to use taxis. However with a little bit of know-how and forward planning, it can be easy to bring down the cost of travelling in Borneo, although admittedly not to say Thai or Cambodian prices.

The first to follow is to book your flights ahead as far as possible. I realise that this may make you recoil in horror — after all, the backpacking ethos is all about going where the wind takes you. However backpacking for long distances can also require careful saving of the pennies so, I say again, book ahead. The three main airlines in Borneo are Malaysia Airlines, AirAsia and MasWings and often their tickets will be cheaper than travelling by bus — if you book in advance, say by one to two months. Kuching, the city of cats and capital of Sarawak.

Next up, know your holidays. The great thing about living in Malaysia is its ethnic diversity; this also means that there are public holidays galore: Hari Raya, Chinese New Year and Gawai, to name but a few. During these times, travelling can be incredibly difficult. This year during Gawai, airplane tickets from East Malaysia to West Malaysia were harder to come by than a herd of unicorns frolicking in a field of four-leaf clover. Bus travel was a smidgen easier, but only if you were travelling solo. Even if do get your hands on that golden ticket, then it will probably cost you the best part of your offsprings’ inheritance. I exaggerate a little bit but it is notoriously difficult and expensive to travel during holiday periods. It’s instead best to settle in one place and enjoy the festivities and if you’re lucky, as happened to a friend of mine, you may get invited back to someone’s kampung (village) and feast on barbecued python while lounging in the equatorial sun. 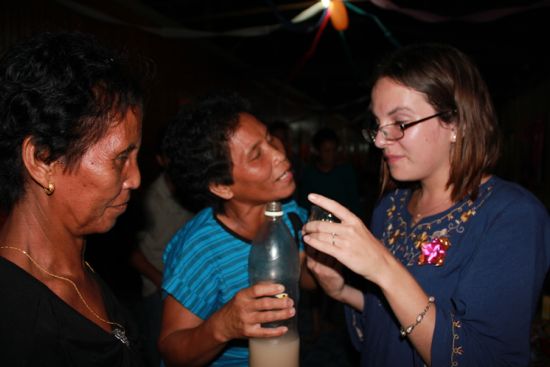 Gawai is a time for drinking, can you tell?

Which brings me to my next point: manage your expectations. Many come to Borneo expecting swathes of lush jungle creeping over the walls of the airport while orang utans puzzlingly gaze at their hairless cousins alighting their loud, shiny flying machines. Let me tell you that this romanticised version of Borneo no longer exists. Rapid development of the Malaysian economy has led to much of the jungle in Sarawak, and especially Sabah, to be cut down and turned into palm oil plantations.

Development has also brought with it cities. And I’m going to be honest: with the exception of Kuching, the cities in Borneo are a bit rubbish. The architecture languishes somewhat especially when compared to neighbouring Indonesia, so do not expect your National Geographic moment as soon as you head out of the airport.

To fulfil your dreams of misted canopy panoramas you need to head to a national park — this is the cheapest way to see rainforest in Borneo, but it may not be the isolated idyll that you had hoped for. Unless you have 200?300 ringgit per day to spend, this may be the only rainforest that you’ll be able to see. Travelling into the interior is pretty expensive due to poor infrastructure, but this is where you’ll find the Borneo of coffee table books and expensive magazines. This picture cost me a lot of money.

And as you work out how to get around, try not to use travel agents if possible. Some travel agents organise trips to national parks, especially Mulu, however with a little more effort you can easily save 200 to 300 ringgit on a trip if you book everything yourself. Most people in Borneo speak a good level of English, so there should be no difficulty in making yourself understood.

Do, however, try to travel in a group. As always, the bigger the group, the more you can spread the cost around and nowhere is this advice more pertinent than in Borneo. As mentioned above, public transport is sometimes hard to come by, which will force you to take a taxi that may blow out the budget of a solo traveller. Even if you are not travelling in a group, you can often ask the staff at your guesthouse if anyone is going your way, and more often than not, there will be someone. Failing that, it’s worth ringing round the backpacker lodgings in your area to get an ad hoc group together.

Do consider travelling by night bus. There are two notable night bus journeys in Borneo run by various companies for 90 ringgit each; one runs between Kota Kinabalu, in Sabah, and Miri in Sarawak, and the second runs between Miri and Kuching. The beauty of these bus services is that they last between 10 to 15 hours, meaning that you arrive at your destination at a sensible time and you will have saved on a night’s accommodation.