Is it cheaper to book hotels and guesthouses in Thailand with Agoda?

Is it cheaper to book hotels and guesthouses in Thailand with Agoda?

Over the past couple of weeks I stayed at eight hotels and guesthouses on Phuket in Thailand — at Nai Yang and Surin beaches in the north and Phuket Town to the south. For seven of the eight, I booked at least one night through Agoda with an average night costing 838 baht net. Did I save money? Yes. A lot of money? No.

We here at Travelfish.org are an affiliate of Agoda, meaning we make a commission if hotels are booked through us. So I thought a good experiment would be to see if Agoda’s “best price guarantee” really stands up when compared to what I could get the room at by dealing direct with the guesthouse or hotel. 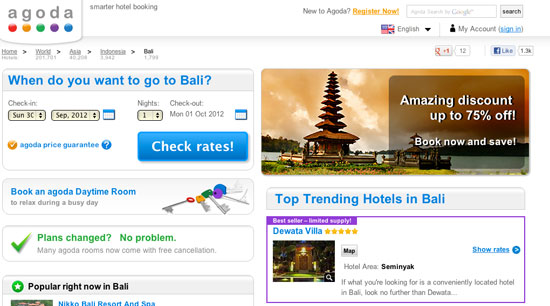 Agoda takes you to Bali and a bunch of other spots in Asia.

Of the seven hotels I booked, five were cheaper with Agoda, one was identically priced and one was more expensive. The savings ranged from 35 baht to 300 baht on a single night’s stay; the single case where dealing with the guesthouse was cheaper saved me just 100 baht.

While I’m not going to name the specific guesthouses, here are the price differences.

The numbers add up.

As you can see, the average saving was 112 baht. That doesn’t sound like much until you consider the average room cost was only 838 baht. (Prices above are all net).

Are the discounts real?
Are the discounts on Agoda real? That’s impossible for me to know for sure, but I assume they’re generally deducted off the hotel rack rates — which nobody in their right mind pays anyway.

I generally ignored the discounts and just shopped by price — I knew I didn’t want to spend more than 1,000 baht a night, so it didn’t matter to me if the room was discounted 50% or not at all.

I have heard a number of stories of hotels jacking up rates then heavily discounting them (not only on Agoda), so unless you know better, I would take some of the advertised discounts with a pinch of salt. 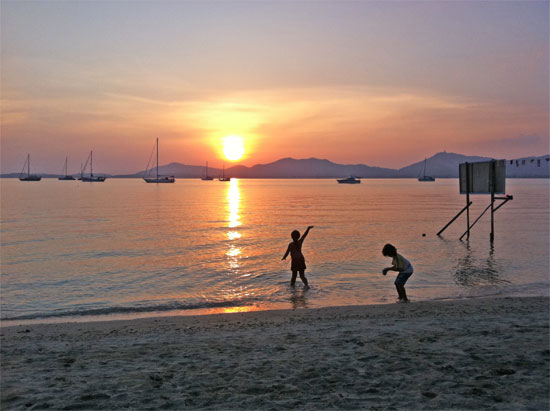 That saved $100 gave me an extra two days on the beach.

What are the downsides?
The number one downside is that you can’t see the room before you agree to book it. On one occasion the guesthouse was a dump and I wouldn’t have stayed there — and most certainly would not have paid their asking price — but generally I fared okay.

A second problem is that if you’re using a foreign credit card for all these bookings you may be accumulating a bunch of foreign transaction charges that you wouldn’t be if you were just paying in cash upon check-in. Obviously this will depend on your credit card.

Lastly, the goods are not always delivered. I needed WiFi and one place advertised in-room WiFi, but when I showed up and asked after the password they explained that the WiFi didn’t actually work in the rooms and that I needed to use it in the restaurant area. This wasn’t a big deal, but was annoying — and would have probably stopped me from staying there should I have just been a walk-in.

But doesn’t Agoda only do hotels?
No. Their coverage continues to improve in Southeast Asia across all budgets and destinations. Yes, they concentrate on midrange and up properties, and you’ll struggle to book rooms in remote areas, but there is a growing number of budget hotels and guesthouses covered. The most recent change has been the addition of places that offer dorm beds — another move that should assist with budget travellers.

Is it worth using?
If you take my example and stretch it out for a month of travel in Thailand then you could easily be looking at at least $100 in savings (before points for booking and writing reviews). That’s not going to buy you a beach house, but $100 is $100!

Do we use it?
Yes — we use Agoda. Not always of course — in some cases the places we want to stay are not listed there, but when they are, Agoda is how we book.