Even those who rarely venture from their neighbourhood pubs know Thailand for its magnificent beaches, glittering temples, fiery food and notorious nightlife. Now drawing well over 20 million visitors a year, the kingdom has accommodation for every imaginable niche and budget. But will it keep the backpackers smiling for long?

The trailblazers who first crashed on empty Thai beaches in the 1980s will now find some of those same beaches fully developed with a mix of large-scale luxury resorts, boutique hotels and featureless villas that fetch 3,000 baht (US $95) a night in high season. A few old-school bamboo bungalows might sit in the shadows of all that concrete, at least for now. I swear there was a 100-baht bungalow right here!

During his first visit to Bangkok in 1992, Travelfish co-founder Stuart McDonald paid 60 baht a night to stay at a place called Bony Guesthouse, which he recalled featured a big ceramic jar in lieu of a shower. Like many Thai guesthouses back then, Bony was a local family's house with a few extra rooms rented out to passing travellers.

According to Stuart, much of the accommodation in Bangkok at that time "was either a big hotel or someone's house... Little had been custom-built for tourists". Round-the-clock electricity was a distant dream on most of the islands, where travellers had a choice of hut, tent or hammock. The term boutique remained nothing but a French word for "small shop". 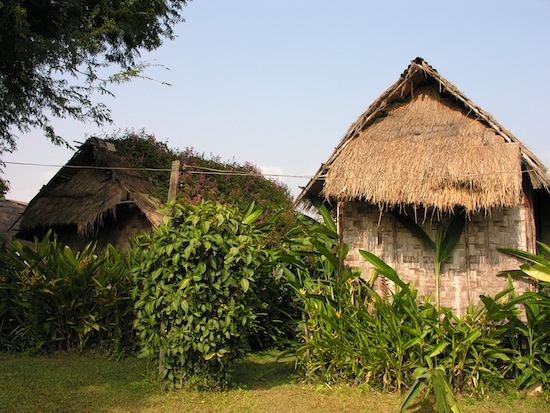 In a country that still lacked many first-world comforts, the majority of rooms were insanely cheap by Western standards. Not surprisingly, they were mostly filled by young, baht-pinching backpackers who were happy to rough it in exchange for adventures in an exotic land. If you happened to be one of them, we're sorry to tell you that the glory days are over.

After apparently checking out the current Bangkok travel guide, a Travelfish member who last visited Thailand eight years ago, pointedly asked: "Where has the budget accommodation gone?" While plenty of cheap rooms can still be found, the question provoked us to look deeper into how Thailand's accommodation landscape is changing.

Hostel is the new guesthouse
Over the years, "guesthouses" have evolved from being family-owned houses with a few rooms for rent (those are now called "homestays") to purpose-designed mini-hotels with 24-hour reception, internet stations, lounges, restaurants and maybe a tour desk. The two chief factors that made a given guesthouse popular were: a) inexpensive rooms with minimal cockroaches, and b) a lively scene where you could meet other travellers. 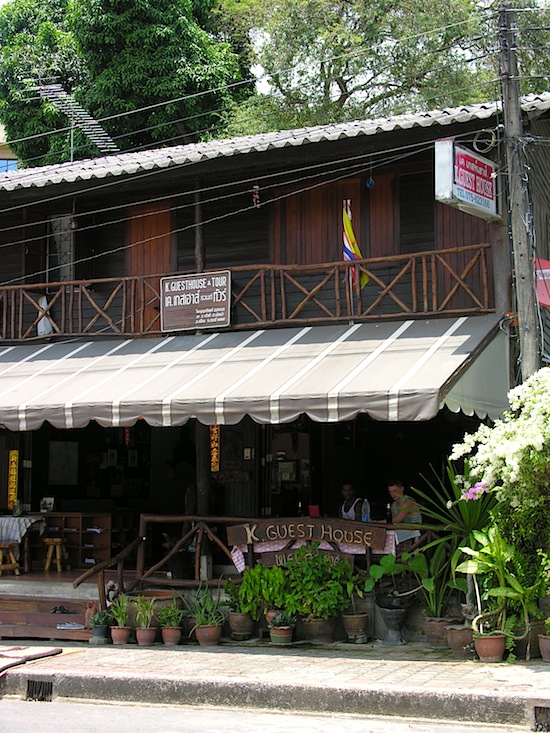 These became standard accommodation for foreign travellers on a budget, with cheap bungalows being the island equivalent. For a long time, the only other options were large and comparatively expensive hotels and resorts that were usually sold through travel agents; or old-school Chinese-Thai hotels that had targeted domestic travellers since Jim Thompson's days.

While guesthouses remain popular in Thailand today, they seem to be gradually going out of style. Born in Europe and adopted by Asian cities like Tokyo and Singapore, the stylised hostel craze has now been firmly planted on Thai soil. Many would-be guesthouse owners now open hostels instead, while some old guesthouses have transformed into slick hostels. 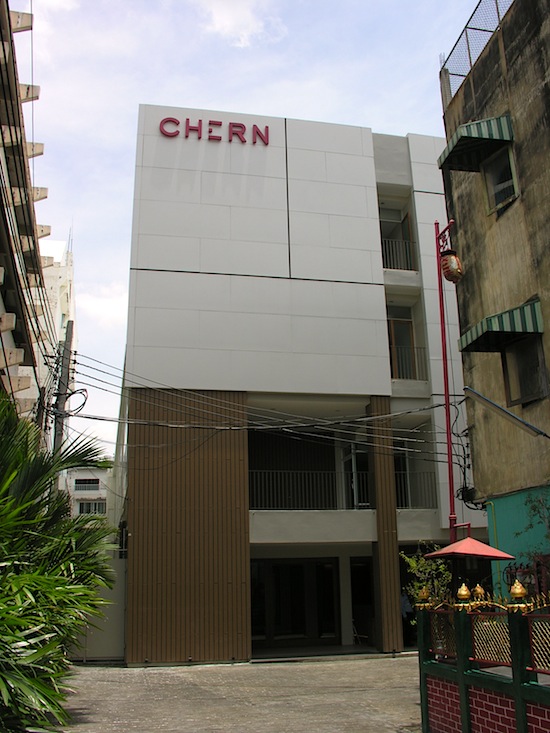 Unlike in more expensive countries, hostels are not always the cheapest choice in Thailand. On several occasions, and not only in Bangkok, we've come across dorm beds that go for 400 to 500 baht per night when guesthouses in the same area offer private rooms for the same amount or less.

Many of the higher priced hostels have catchy design themes that range from "prison-camp-chic" to "antiquarian-Thai" and "boozy-art-pad". Yet plenty of others are essentially guesthouses that have jumped on the hostel bandwagon; many don't even offer dorms at all. "Hostel" is often used simply as a modern replacement for "guesthouse".

So why are guesthouses dying out?
One theory is that guesthouses have become associated with that minority of backpackers who can be aggressively stingy, stinky and generally offensive (no it's not okay to enter a temple in a bikini). Though many Thais are experts at travelling on the cheap, most don't seem to relate to the so-called backpacker lifestyle.

At the same time, a booming Thai economy has made it possible for more Thais to travel for leisure. Hoteliers have responded by introducing accommodation that will appeal both to short-term domestic holidaymakers and foreign travellers who have graduated from their backpacking days to seek something a bit more cushy and sophisticated. 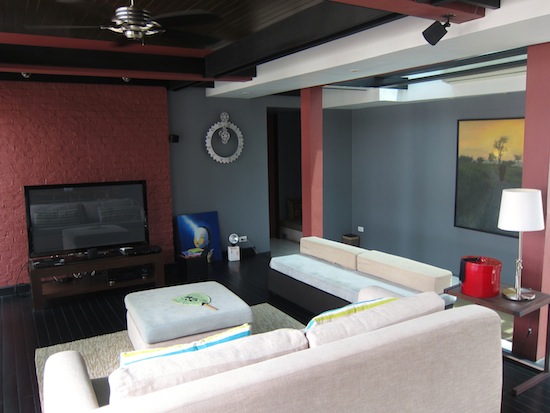 With millions of relatively well-funded foreign and domestic travellers all looking for rooms, why open a cheap backpacker guesthouse? And if it's not geared towards backpackers, why call it a guesthouse at all?

Enter the boutique hotel
The catch-word "boutique" is now being swallowed up by travellers as often as pad Thai noodles. They're not guesthouses anymore; they're boutique houses. Throw a red-silk pillow on the bed, draw a couple of flowers on the wall, and -- voi-la -- these masterful interior-design skills have bagged you an extra 500 baht per room. 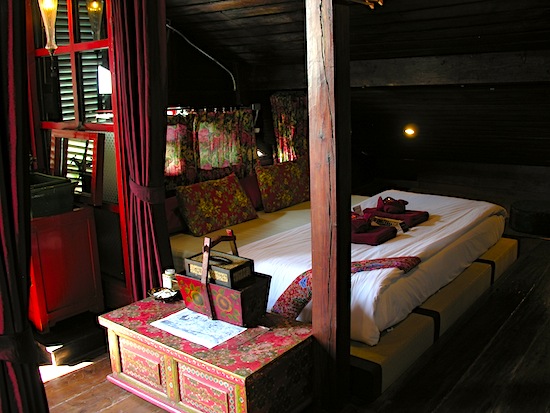 For the record, our definition of a boutique hotel is an intimate place to stay -- so not more than a dozen or so rooms -- with a creative touch and no two rooms that are alike. The art should be hand-picked by (or better yet, created by) the designer; vintage antiques and heritage architecture are welcome but not required; and, most importantly, the word "boutique" does not have to appear in the title. People over 40 might be thinking, "Isn't that a bed and breakfast?"

An easy-to-miss turn off the boutique highway takes you down the "eco" route. In Thailand, the term is sometimes used honestly by hotels with environmentally sound practices, but is often a shameful ploy to tap the ever-growing sustainable travel market. 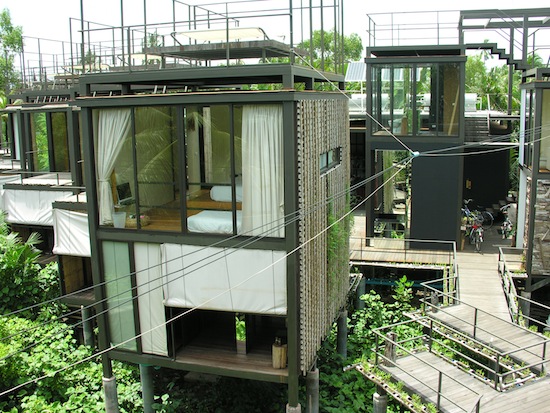 Whether used properly or not, the terms "boutique" and "eco" usually translate into "expensive". More than a few old guesthouses are now "boutique hostels" or "eco-resorts" that are often very popular among a diverse mix of travellers. Most backpackers, on the other hand, simply can't afford those red-silk pillows.

Rooms are comfier online
Long gone are the days when travellers relied on traditional guidebooks and travel agents when picking a place to stay. Even many of the lowest-budget backpackers are now extremely savvy, scouring online reviews and blogs in search of ideal rooms and inconceivable deals. While the vast majority of cheap rooms used to be booked in person, on the spot, many budget travellers now opt to book online. 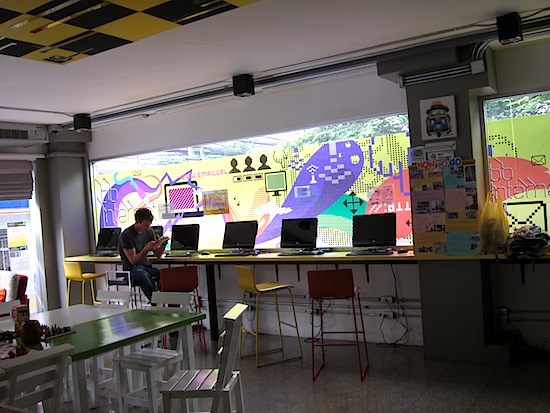 Maybe I'll search for tips online instead of noticing this travel writer standing right in front of me.

Before this shift occurred, a lively atmosphere and reasonable rooms were all that a guesthouse needed to literally lure travellers in off the street. Today, the same sorts of travellers wander past the same sorts of guesthouses and think, "Why didn't I see this one online?" Unless the old-style guesthouses have phenomenal reputations, they're forced to reinvent themselves as "boutique hostels" -- or anything that cuts through the clutter of cyberspace.

Does this mean budget travellers are doomed?
Over the past several years, room rates in the big cities and popular islands have steadily climbed. Even some of those basic cold-water beach bungalows that went for 50 baht a night 20 years ago now fetch 1,000 or more in peak season. Plenty of budget options remain, but they're overshadowed by all of the bigger, pricier, boutique-ier resorts that have gradually filled in the landscape. Dude, where are the cheap rooms?

Even so, very few destinations lack some sort of low-cost accommodation, which in Thailand means under 600 baht per night. In places like Sukhothai, Bangkok's Khao San Road and Chiang Mai's old city, budget travellers still huff it from guesthouse to guesthouse and score private rooms for 400 baht or less. The difference nowadays is that you might have to huff a little farther to find it.

Is this really a bad thing?
Complaining backpackers and unfortunate names like "Sunset Splendor Tropical Garden Boutique Eco-Resort" aside, the bottom line is that Thailand's accommodation scene is now better than ever.

Those wanting a local experience can settle into a homestay; budget travellers who appreciate a modern edge can go for a hostel; those who incline towards the artsy and intimate might check out the B&Bs and boutique hotels; travellers wanting a straightforward comfy room can grab a serviced apartment; the well-heeled have an impressive selection of swish hotels and five-star resorts; and yes, the old-style backpackers still have their old-style guesthouses. 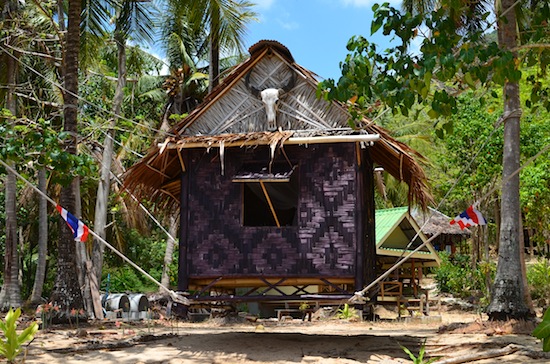 Plus "swinging bungalows" like this one at Sunset Beach Bungalow, Ko Jum.

While it's true that some of the modern boutique hotels and concept resorts are more shocking than stylish, Thai hoteliers should be praised for pushing the creative limits light-years beyond the boring chain hotels that dominate many Western countries. From concrete blocks reborn as plush pads to tastefully restored teakwood houses and space-age hostels, Thailand has come a long way since Bony Guesthouse.