Kids fire super-powered water guns from the back of a zooming tuk tuk. A wrinkled woman blesses her grandchildren in a touching ceremony. Scented water showers over a Buddha image as Thai rock music thumps. Held annually from April 13-15, Thai New Year, or Songkran festival, is a time to cleanse, pay respects and let loose in some of the world’s wildest water fights. Sawasdee phimai! (Happy new year!)

Background
Songkran is rooted in the distant past. Ancient Indian Brahmins considered the passing of the moon, sun and planets into the zodiac sign of Aries to signal a new astrological year. The Sanskrit term songkran implies “ascending” or “moving on,” and this astronomical event takes place in April. For the ancients, animals emerging from hibernation, and trees bearing blossoms, probably contributed to this feeling of a fresh start. 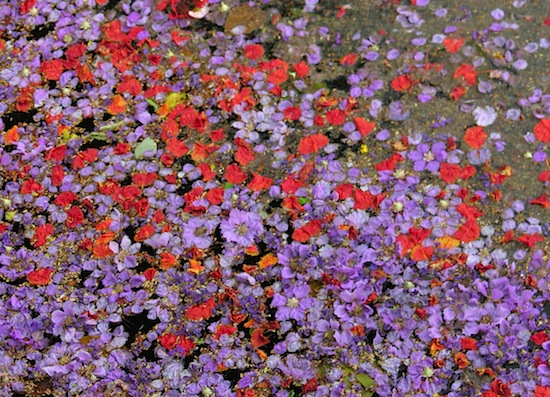 Flower petals fill up a Chiang Mai canal over Songkran.

Like so many influences from India, the April new year was adopted by the Thais, and adapted to become a distinctive part of Thai culture. Celebrated during the Thai hot season, before the monsoon rains, it’s a time when farmers are free from routine duties and a little water splashing helps to keep everyone cool. The Thais (also the Mon, Shan, Lao and others) have probably celebrated Songkran, in some way, since at least the 13th century.

Customs
While today’s Songkran can seem like it’s all about getting wet and crazy, traditionally the holiday focuses on renewal – and the old customs are still very much alive.

It begins by sweeping out houses, shops and schools to get rid of anything that was a negative influence over the past year. At temples, Buddha images are scrubbed clean by the monks, then sprinkled with scented water by the faithful. This blessed water, known in Thai as nam om, is later used in a ceremony to honour the elders. Young people gently wash the old folks’ hands in exchange for a blessing and a white string, symbolising longevity, which is tied around the wrist. 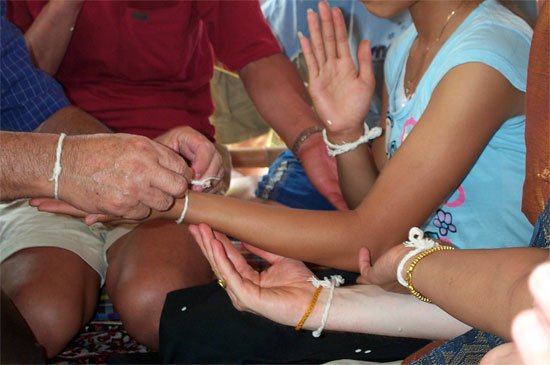 Leave it on until it falls off naturally to ensure your good luck.

In one colourful aspect of Songkran that’s become a big draw for tourists, sacred Buddha images are removed from their wats and paraded around their communities. In the old days, the images would have been placed on carts or elephant-back, but with some exceptions (see below), pick-up trucks often do the job today.

At some point in the evolution of Songkran, revellers began splashing water on each other as a lighthearted extension of the cleansing custom. Usual inhibitions were gradually tossed aside. Laypeople could throw water on monks and young men and women could splash their crushes, gaining the holiday a reputation as a time for fun and courtship. Both of these are alive and thriving in today’s Songkran. 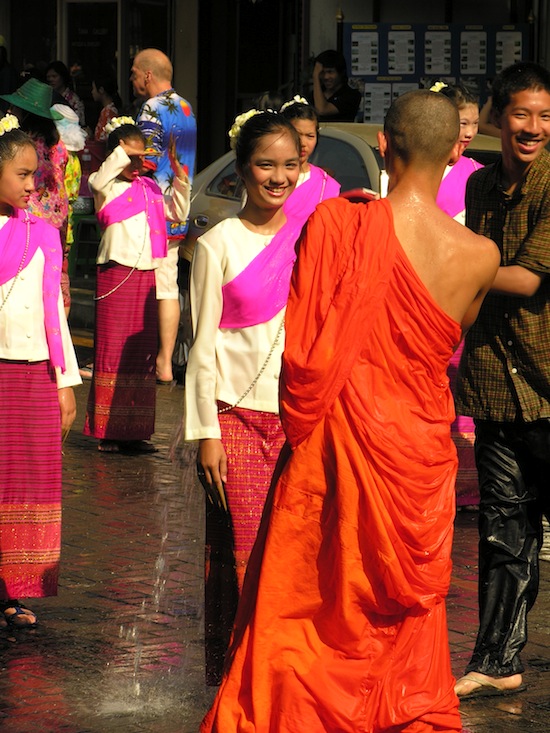 Young monks flirting with pretty girls? Why not, it’s Songkran.

Festival-goers also rub white talcum powder onto the faces of friends and strangers, a custom thought to bring good luck and protection — and is another means for young people to show their affection. This also has roots in India, where people have long used powders to mark different religious blessings and to celebrate festivals, Holi being the most obvious example. In everyday Thai life, monks use talcum to draw protective symbols on vehicles and in houses.

On temple grounds, tradition dictates the building of small sand stupas with coins buried inside for good luck. Once completed, the sandcastle mounds are decorated with ribbons, candles, joss sticks, shells and flowers, and then sprinkled with scented water. Many temples also hold fairs with plenty of food, beauty pageants, folk performances and the ritual of releasing caged birds and fish. 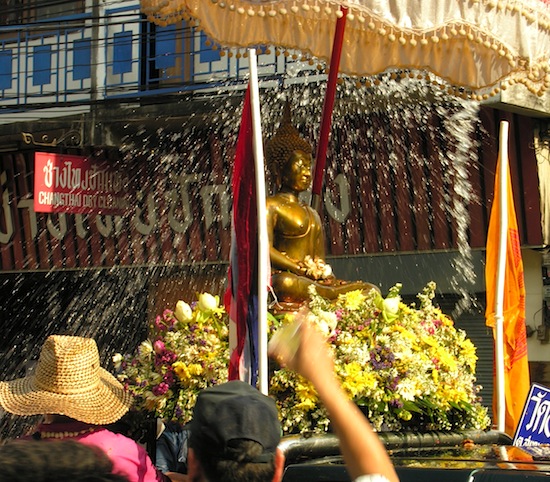 Could the ancient Brahmins have anticipated what Songkran would become? Probably not. But even today’s all-out water battles are rooted in these much older, gentler traditions. So when teenagers douse you in ice-cold water and laugh hysterically, keep in mind that they’re only performing an act of benevolent kindness.

Preparing and staying safe
For many foreigners and a growing number of young Thais, Songkran today is defined by water guns, wet T-shirts and no shortage of booze. It’s undoubtedly the biggest bash of the year in Thailand: think New Year’s Day, the Fourth of July/Guy Fawkes Day/Canada Day/Australia Day and the last day of elementary school, all rolled into one huge shebang. 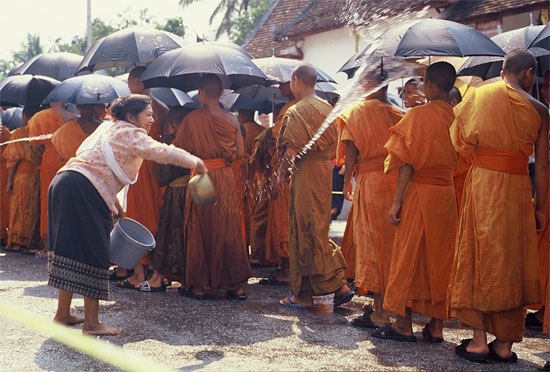 Photo from Laos, where it’s same same and not too different for Phimai Lao.

Make no mistake: you are going to get soaked. For the full three days (and extra days before and after in some places), Thais will bring buckets, water guns, hoses, fire cannons, coconut husks, plastic pails — anything that projects water — and employ them to drench anyone and everyone. You have two choices: stay in doors, or get your own water gun and go on the defensive.

Stick with flip flops on the feet and don’t forget sunblock, sunglasses (or goggles can be effective for tactical water fighting missions) and plenty of dry underwear for afterwards. 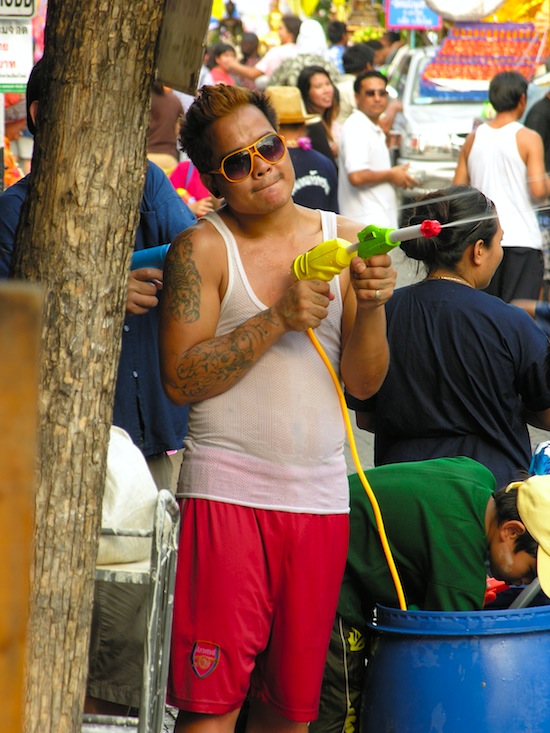 This photo only cost us a 4,000 baht camera repair!

Place any valuables in water-proof plastic bags, which are sold everywhere during Songkran alongside water guns and balloons. Everyone wants photos of this event, but please don’t risk your expensive non-waterproof camera. As we once learned the hard way, the corner of a noodle shop does not provide adequate protection.

On a serious note, Thailand’s roads are dangerous at any time, but the risk jumps exponentially during Songkran, when drunk/reckless driving is more common than usual. During Songkran 2014, 3,225 people were injured in road accidents and an additional 322 people died. It cannot be stressed enough: be very careful crossing the street or getting in a taxi or tuk tuk. Renting a motorbike to ride through a party area is probably not a wise decision, even for the experienced. 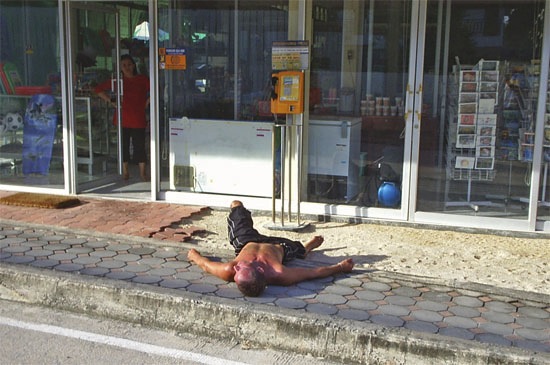 To sum up, use common sense. Don’t get so drunk that you can’t walk. Don’t take rides from tuk tuk drivers who smell like a bar. Don’t feel bad about walking away from people who are being aggressive.

Where to go
Songkran is celebrated all over Thailand, with several places displaying their own regional traditions. We’ve suggested some of the more popular destinations below, but you could have a great experience in just about any city, town or village.

Chiang Mai is a top destination for taking part in the full range of Songkran activities. Huge crowds of water-gun-toting locals, expats and travellers overrun the banks of the old quarter moat, where water is pumped into hoses for continual soakage. Elaborate ceremonies take place at historic temples like Wat Phra Singh, and an impressive parade lumbers up Tha Phae Road. The city also celebrates for two extra days, totalling five full days of water tossing. 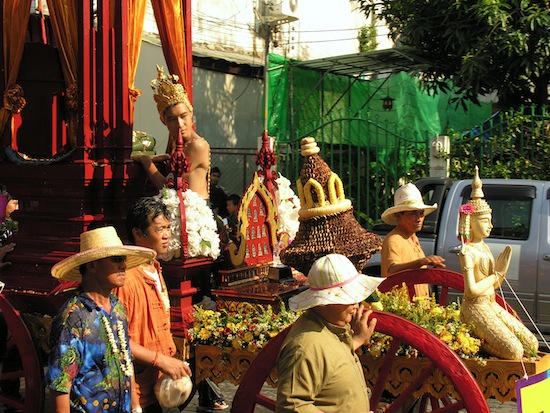 Bangkok becomes almost unrecognisable during Songkran. Millions of taxi drivers and labourers return to their home towns, leaving most of the normally choked streets free of traffic. Along with ceremonies at Sanam Luang and several temples, huge water parties take place at Khao San Road, Silom Road and Royal City Avenue. The Mon enclave of Phra Phradaeng puts on its own terrific festival on the Sunday following April 13-15.

The ancient Thai capital of Ayutthaya is a great option for those who hope to see Songkran in its more traditional incarnation. The highlight is a lengthy elephant procession, with ceremonies, beauty pageants, folk performances and plenty of water splashing taking place around the historical park. Not far to the north of Ayutthaya, Suphanburi is also a good choice, especially if you want to avoid other foreign tourists. 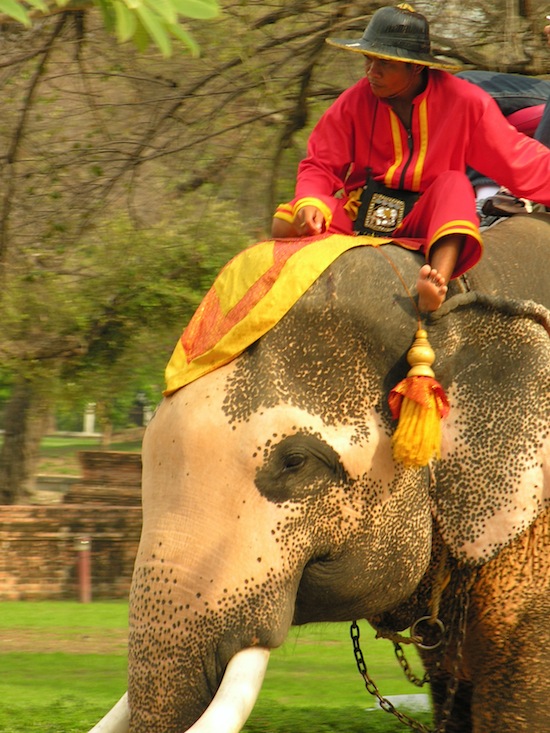 Ayutthaya’s elephants enjoy a splash too.

A major city in Thailand’s northeastern Isaan, Khon Kaen hosts one of the kingdom’s largest Songkran festivals. Centring on Khao Niao (Sticky Rice) Road, the city turns out a colourful ox cart parade along with a wide array of folk performances and a food fair at Kaen Nakhon Lake. Another good option in Isaan is Nong Khai, which holds its own parade alongside the Mekong River.

Phuket gets things rolling with a ceremony in the island province’s capital city on the first day. The water fighting party is centred at Bangla Road in Patong, with the other major beach towns also getting in on the action. If you’re in Southern Thailand and want a more traditional Songkran, Nakhon Si Thammarat holds a large Buddha image parade and an interesting swinging contest that derives from an ancient Hindu ritual. 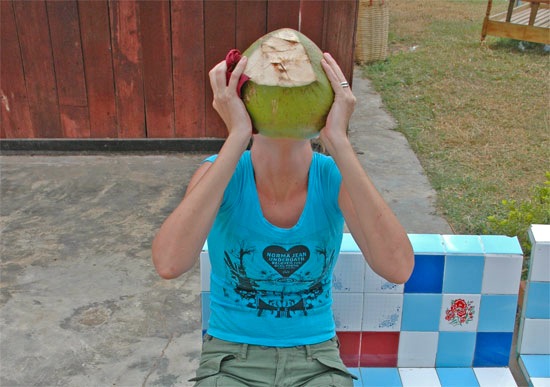 Don’t feel like getting wet? Try hiding behind a coconut.

If you’re planning to travel right before Songkran, be sure to book your tickets as early as possible. Train tickets from Bangkok to Chiang Mai, for example, will be sold out weeks in advance. Long-distance buses will have more available seats, but it’s still a good idea to purchase tickets at least a day or two beforehand. Most public transport, both local and inter-provincial, operates normally during the actual festival. If heading to one of the major Songkran destinations, advanced hotel bookings are also recommended.

We understand that getting drenched for several days straight is not for everyone. If you want to avoid Songkran without locking yourself up in a hotel room, you might head to a remote island, like Ko Kut or Ko Phayam, or a national park. The other option is to leave Thailand, though keep in mind that Burma, Laos and Cambodia each celebrate the related festivals of Thingyan, Phimai Lao and Chaul Chnam Thmey, respectively, around the same time.

This piece was authored on an anonymous basis.