Far southern Thailand: Go or not?

Far southern Thailand: Go or not?

Thailand's strife-torn far south is a region largely under siege, with 9pm curfews and a heavy military presence throughout. But when I backpacked through the provinces of Narathiwat, Pattani, Yala and Songkhla in June 2005, I also found time and time again genuine Thai hospitality that has become somewhat of a rarity in other parts of the more heavily-touristed south.

The far south is not safe. Thousands of people have been blown-up, murdered and beheaded, and while western tourists are not being targeted, that could change and I certainly wouldn't want to be down there if the focus did switch to foreigners. Nobody is sure who is behind the unrest: while Islamic separatists are often blamed by a press obsessed with terror, there are plenty who believe that organised gangsters and politicians are stoking violence in order to settle their own scores.

I travelled extensively to national parks, waterfalls, isolated beaches and rural villages and at no time did I feel in any way threatened or in danger. The problem lies however in the fact that a bomb hidden in a motorcycle -- one of the most prevalent weapons in use -- is one of the least discerning and most random available.

The most visible evidence of the troubles lies in the military presence and numerous checkpoints. Soldiers, particularly in Narathiwat, maintain a very high profile -- well-armed and travelling around in convoys of humvees and trucks, their visibility initially left me taken aback, but I rapidly learned to take them in my stride. The checkpoints are comprehensive -- whether I was in a car or a motorbike, my vehicle was always stopped. At least to me as a westerner, the soldiers were very polite and in some cases apologetic for the inconvenience, but when travelling by rot tuu -- the minibuses that are the most common form of transport -- with some young Muslim guys in the back seat, I saw firsthand the harassment the people living here face daily. The other noticeable affect is that many of the night markets are cordoned off so that motorcycles cannot be taken right into the market. This seemed to be enforced somewhat haphazardly from town to town and market to market, but it does bring home the fear that everyone in the south harbours of being blown to pieces while eating a plate of noodles.

If you do decide to visit the far south, a few simple precautions will go a long way. 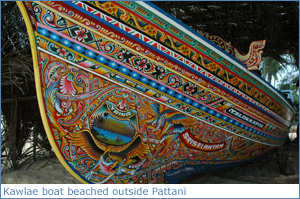 Stay informed
Most importantly, keep a close eye on newspapers and Thai TV news. Even for non-Thai speakers, Thai TV news is easy to follow, due to their penchant for broadcasting gore and an odd habit of showing highway signs -- put the two together and you can surmise there has been a bloodbath somewhere near XYZ town. Do not rely on western news stations, as significant time lags occur between an event and CNN picking up on it.

Ask for advice
Ask at your hotel or guesthouse and/or the tourist office about the safety of where you are headed -- be as specific as you can.

Watch the locals
If a taxi driver or motorcyclist refuses to take you somewhere regardless of the price, they probably have a good reason for it.

Watch your hours
Avoid putting yourself in a remote area at night. For example, if you walk to Narathiwat Beach in the late afternoon, leave for the walk back at dusk at the latest. Many, although not all the attacks, have taken place in the evening and very early morning. If your hotel has a curfew, obey it.

Yes sir!
The Thai army have setup checkpoints throughout the region. If they won't let you pass, there could be a number of reasons why, so don't press the point. Don't get curious
Should a bomb go off near wherever you are, don't rush to the scene to get a better look. Tactics have involved setting off a device in order to draw out police, who are then targetted with a second device timed to go off afterwards.

Embassy warnings
Read them, but take them with a pinch of salt. These warnings tend to be overly cautious in nature.

The region is full of people simply trying to get on with their lives. Transportation and most hotels and guesthouses run as normal. If you are worried about the situation, but still need to get to Malaysia, consider flying from Hat Yai or Bangkok or crossing at a checkpoint in Satun province, which is considered safer.

For the visitor comfortable travelling in an environment of heightened security, the far south is certainly worth considering. I thoroughly enjoyed the stunning landscapes and met some wonderful people. But this is a region experiencing a substantial state of civil strife. Keep an eye on the news and make your own decision.