Back in 1994, Peter Robinson, a British Buddhist monk living at a temple in the Northern Thai province of Nakhon Sawan, began looking into how he could help a promising student find enough money to attend university. His actions then planted the seeds of an education trust that has since grown into a multi-million baht scholarship fund supporting thousands of students across Thailand.

Phra Peter Pannapadipo, as he was called then, had been teaching English at a high school in the area when he came across Seckson, a bright student who had passed the examinations to study physics in university but whose rice-farming family could not afford to send him. Phra Peter, dismayed to discover Seckson had instead taken a job at a petrol station, contacted friends in the UK and managed to raise not only enough funds to support Seckson through university, but an excess amount that was placed into a Students’ Education Trust (SET) to be used to help other students. This was the start of the SET Foundation, which this year granted scholarships to 1,350 students in high school, vocational studies and university in an amount totalling 17 million baht. It has operated as a Thai registered charity since 2005.

One thing that sets SET apart from other charities is its long-term approach to the students it supports. “A major plus about SET scholarships is that they aren’t awarded on a semester-by-semester only, or year-by-year only basis. Our scholarships are long-term and can take the student from high school all the way to a Masters,” Peter said. 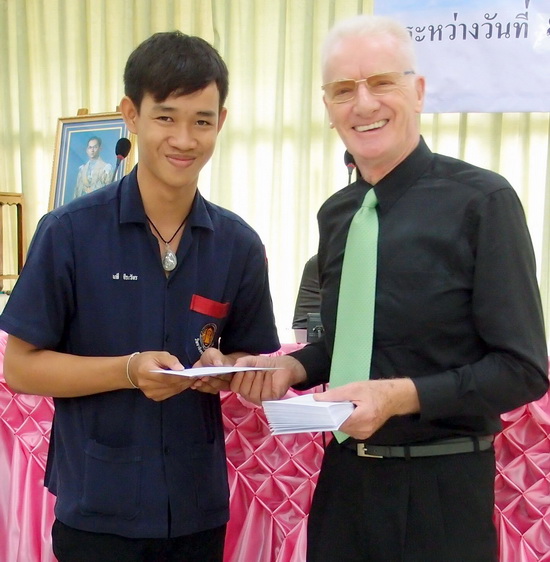 One of the many Thai students supported by the SET scholarship programme.

Since its modest start the foundation’s scope has also grown. Finding that some students had needs beyond the scholarships, SET launched a student welfare program to help cover other costs including school uniforms, food and transport and remove obstacles that could cause students to miss their classes or lose motivation.

A recent SET newsletter described one sad case of a teenaged boy who was keen to complete his education but faced many hurdles. A college welfare officer visited 17-year-old Tatchapon and his little brother, 13, to assess his suitability for a scholarship, and found they were living alone in a dilapidated house with meagre financial support from their family.

Their mother hadn’t been seen since she and their father had separated five years before, and the father rarely visited. The boys had received only 1,500 baht from their father for the whole year. They could barely afford food much less anything needed for their studies.

SET granted Tatchapon a scholarship to attend auto mechanics school as well as a welfare grant to help with his expenses. Having been touched by Tatchapon’s dedication to care for his brother, SET also bought him a second-hand motorbike, which Tatchapon and his friends restored to top condition to enable him to get to a part-time job. His younger brother was also awarded a scholarship for high school.

With Tatchapon and every scholarship and welfare grant recipient, the SET Foundation has a rigorous assessment process that considers not only the students’ need but also their dedication to study. As Peter describes it, “SET does not give individual scholarships itself. We have 12 main scholarship centres and each has a quota (usually 100) which is topped back up each year as students qualify. Professional welfare officers do the student assessments for us, based on our dual criteria of proven need plus proven diligence.” 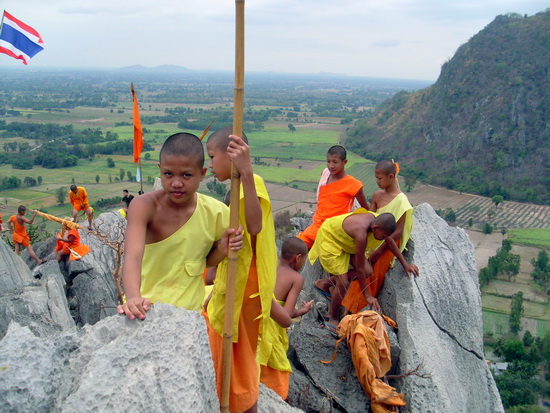 Apart from the scholarship programme, SET Foundation is also a major sponsor of Kiriwong, a school for novice monks that had fallen into disarray before it was revived and staffed with new teachers with SET’s help. Monastic schools in Thailand are often viewed as a “dumping ground” for students who have no other options and as such they often lack the care and funds they need to thrive. SET also helps with the care of children at Saengsawan orphanage, and provides scholarships for kids there who qualify.

SET now operates with a board of seven trustees with Peter still on as its active director. In 2003 he made the decision to leave the monkhood to be able to focus fully on SET. “I think fondly of my ten years as a monk but I’ve never regretted my decision to disrobe,” he said. SET is supported by donations from around the world as well as the proceeds from the books Peter Robinson has penned about the monastic life, including his memoir Phra Farang -- An English monk in Thailand, which has been a best-seller in Southeast Asia, and Little Angels, a set of stories about the lives of novice monks in Thailand.

Donations are accepted by bank transfer, by PayPal at the link below, and, for UK and US residents, donations may be made through the SET-UK and Friends of SET-USA support groups that have been set up to ease the donation process. Find more details on SET’s How to Donate web page.

Donations are urgently needed, said Peter, since the SET saw a 20 percent drop in income over the past year, a figure in line with a downward trend worldwide in international giving.

As the SET Foundation approaches its 20th anniversary, it’s also close to giving out its 5,000th scholarship, which will be granted this December and presented by Seckson, the first student to receive a scholarship back in 1994.

He’s certainly come a long way since his days of pumping gas. He went on to earn a PhD in nuclear physics and is better known as Dr Seckson in his current role as a university lecturer.

All photos supplied by The SET Foundation

Each month a Travelfish.org writer selects a charity or non-government organisation that they believe does excellent work on their patch in Southeast Asia. They write about them and we donate $100, a small way for us to give something back to the region. If you're looking to give back too, please consider giving a little cash as well.