Should I cancel my trip to Thailand? No.

Should I cancel my trip to Thailand? No.

This past Sunday, Thailand's capital Bangkok saw some of its biggest political demonstrations since anti-government protesters took to the streets two months ago. The latest round in a seven-year-long political saga has triggered several isolated incidents of violence and caused major traffic congestion. At this point, we would not cancel a trip to Thailand, or even to Bangkok, but it's wise to stay informed.

What's this all about?

In 2006, billionaire-turned-prime-minister Thaksin Shinawatra was accused of various crimes of corruption that ranged from vote buying to illegal land dealings. Massive protests by the Democrat Party-led "yellow shirt" camp, which mainly consists of middle to upper class Thais from Bangkok and the wealthy southern region, spurred a bloodless military coup that ousted Thaksin from power. He now lives in exile to avoid charges that he claims are politically motivated. 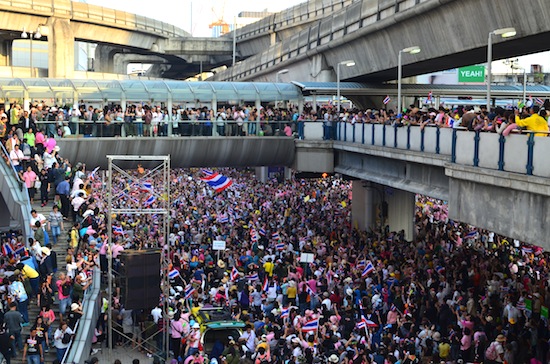 When Thaksin's brother-in-law was then elected prime minister in 2008, the yellow shirts toppled the government again by seizing both of Bangkok's international airports for eight days. Made up of mainly working class Thais from the rural north and northeast, Thaksin's "red shirt" supporters responded to a subsequent undemocratically-elected Democrat government by staging mass protests in Bangkok that resulted in a police crackdown and 90 deaths in 2010.

Later that year, fresh elections resulted in Thaksin's sister, Yingluck Shinawatra, becoming Thailand's first-ever female prime minister. She has managed to maintain a precarious calm over the last two years, but a recently proposed bill that would have potentially granted amnesty to Thaksin sparked elements of the former yellow shirt movement back into action. 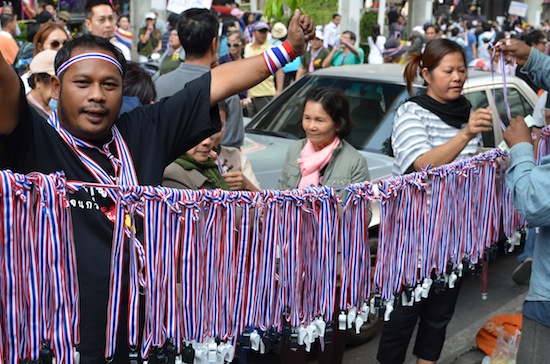 Whistle if you don't love democracy.

While they've traded in the old yellow shirts for patriotic red, white and blue, the current protesters' message is the same -- boot the entire "Shinawatra regime" from power forever. Protest leader Suthep Thaugsuban's calls for sweeping political reforms and an end to corruption have rallied thousands to join the movement, but his suggestion of an ambiguously-defined "People's Council" to institute reforms has been stamped as undemocratic by both the opposition and many neutral critics.

When Yingluck dissolved parliament and scheduled an election for February 2, the Democrats announced that they will boycott it. While another coup is unlikely, the military's top brass have hinted at postponing the election and holding some sort of neutral reformation meetings that could potentially calm things down. If the election is not postponed, it's likely that protests will increase in size and frequency in the coming weeks.

What's the situation on the ground?

The situation escalated in late November when brazen protesters scuffled with riot police armed with tear gas and rubber bullets outside Government House and several key ministries. On December 1, five people were killed at Ramkamhaeng University in Bangkok's eastern suburbs during clashes between students and government supporters who were staging their own rally in a nearby stadium. Apart from these and a handful of other isolated incidents, the protests have remained peaceful. 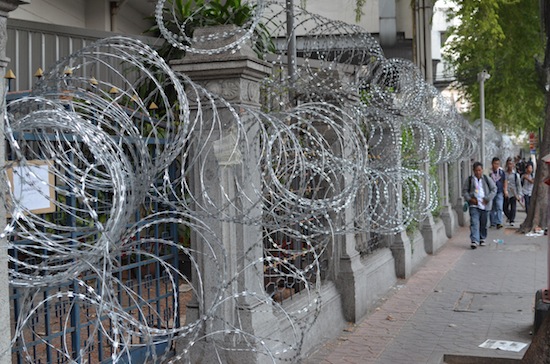 Daily rallies have continued at the main Democracy Monument protest site, and December 22 was the second Sunday in three weeks that saw much larger rallies spread across the city. Huge gatherings took place at the intersection of Sukhumvit and Asok roads, Silom Road and Lumpini Park, Victory Monument, Wongwian Yai in Thonburi and the Siam Square / National Stadium area.

The scenes were more festive than angry, with boisterous demonstrators blowing whistles and waving flags while taking periodic breaks to enjoy an ice cream or foot massage. But the rallies clogged major roads and we felt for the travellers trying to navigate their suitcases through the noisy masses. Note that, apart from Democracy Monument, these areas have only seen the occasional rally on particularly big days. Most of the time, it's business as usual in most of the city, though that could change as the election looms.

What does this mean for travellers?

Though several countries have issued travel warnings in relation to the protests, Bangkok is peaceful for the most part and the rest of the country has remained unaffected. During larger rallies, we strongly suggest using the BTS sky train, MRT subway, Chao Phraya river ferries and canal boats, all of which have continued to operate normally. If you find yourself stuck in a rally, motorbike taxis are usually around to whisk you away in a hurry. Long-distance buses, trains and flights have been unaffected.

While reports suggest that some travellers are cancelling their trips to Thailand altogether, it seems that many are only opting to skip Bangkok. In Chiang Mai, Kanchanaburi, all of the islands and elsewhere, it's business as usual. 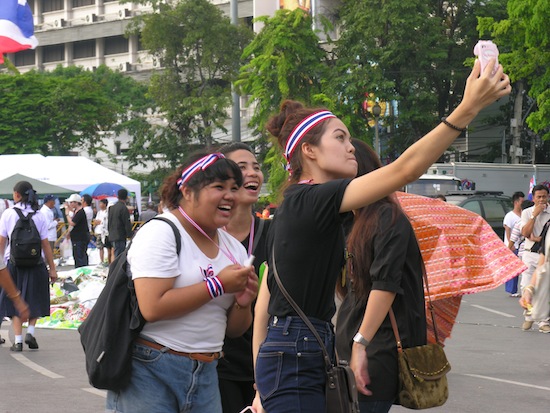 What if I don't want to miss Bangkok?

By all means, stick around. The protesters are not targeting foreigners in any way, and the vast majority of the city is as safe as ever. For now, protesters have stopped attempting to occupy government ministries and are generally sticking to more pre-defined plans, making the situation more predictable than it previously was. Of course, this does not mean that it won't change.

At present, the only place that you should absolutely avoid is Government House. Catching a taxi to Khao San Road can be a bit more challenging than normal, but virtually no violence has been reported at nearby Democracy Monument. The police have been relatively restrained and Yingluck seems committed to a non-aggressive approach. Your best bet is to keep an eye on the Travelfish Facebook page and the following local media outlets for the most up-to-date info: