Life in the Andaman Sea islands

Life in the Andaman Sea islands

With the monsoon now in full swing in Thailand’s Andaman Sea islands, few tourists are found and bungalows are boarded up. Yet, despite the rain, locals navigate longtail boats through the waves to put fish on their tables, endure the dampness to tap rubber trees, coerce water buffalo to plough fields, take the time to practise their religions, play their games, and simply sit back in a hammock from time to time. It’s a life told better through pictures than words. A Moken woman digs for shells on Ko Chang Noi.

Island homes are typically modest, sometimes little more than shacks by the sea, but like these on Ko Muk, they possess an enviable air of simplicity. Though usually calm and peaceful, island life is not always easy. Mainland comforts have yet to reach a host of smaller islands, and many still go without electricity, let alone internet and cell phones. On an island like Ko Bulon Lae, where this photo of traditional cloth drying was taken, life goes on much the same as it has for centuries. A visit to Ko Bulon Lae is akin to going back in time 100 years.

On some islands, the only connections to the mainland are an occasional crackling radio, or perhaps a charmingly placed post box, such as this one on Ko Surin. Despite the fact that many islanders could live reasonably well off only the resources of their island and the sea, modern food and supplies from the mainland are sought after. To earn money, many islanders have planted rows of rubber trees, which thrive in the wet, tropical climate of south Thailand. Drip by drip, the rubber is harvested from trees like this one on Ko Libong. Today a tree on an island, tomorrow a tyre in a city.

Once a significant volume of raw, liquid rubber has been collected, it’s molded into mats and sun-dried, like these on Ko Sukorn, before being ferried to market on the mainland. The finished product, at least as far as the grower is concerned.

Although rubber is a major source of income for many islanders, growing rice, fruit and vegetables is still an important part of island life, and for this, water buffalo are a key source of strength on the farms. These buffalo on Ko Sukorn, however, didn’t appear to be working too hard. While some animals are put to work on the islands, others — like this friendly hornbill on Ko Phra Thong — have their own business to attend to. You know it’s a laid back island when the birds hang out with the locals.

Of course, the sea is the most pivotal external aspect of life for islanders, and for many — such as the family of Moken sea nomads pictured below on Ko Chang Noi — boats are a way of life. 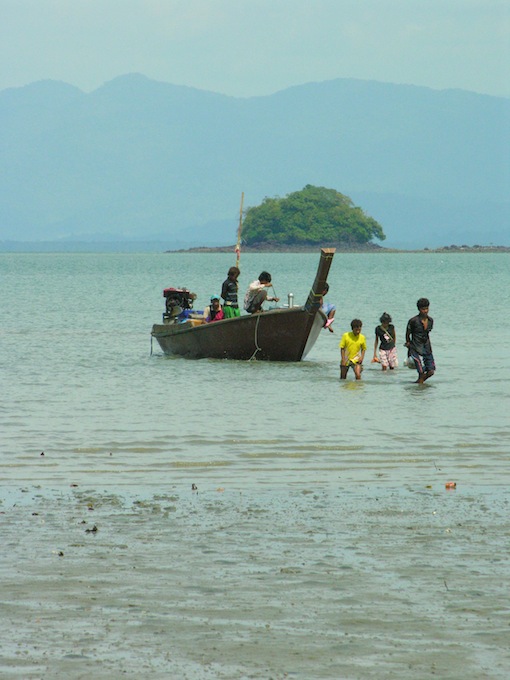 Many Moken spend the majority of their lives at sea.

As it has since time immemorial, fishing remains a vital source of food and income for islanders. In this morning scene from a Ko Phra Thong pier, crab traps await being transported to the bottom of the sea. Ko Phra Thong’s easterly seaside village is among the most picturesque we’ve seen.

A secret of southern Thai crab trappers is to put out as many traps as possible when there’s a full moon and during the week surrounding it — for some reason, crabs caught during this time possess a particularly sweet flavour. After the meal pictured below, I had little doubt about the practice’s validity. The fruits of early rising fishermen.

While the sea provides islanders with a wealth of resources, it’s never disrespected or taken for granted. The 2004 tsunami devastated many of the Andaman Sea islands, and locals who survived live with the knowledge that as quickly as the sea gives, it’s also capable of taking. Although islanders are typically hard working folk, they have also perfected the art of relaxing, and indeed the laid back atmospheres of small Thai islands are an infectious draw for many travellers. While there always seems to be time to lie back in a hammock, islanders also enjoy themselves by playing games like soccer, bocci and bird singing contests. In these contests, popular throughout south Thailand, villagers submit their red-headed bulbols and other caged birds in competitions to see whose bird sings the longest. The contest pictured here from Ko Libong began with some 25 contestants, and only two remain. The suspense is killing me.

Andaman Sea islanders are often deeply spiritual people, and typically it’s in a way that transcends mere rituals to develop a true connection with nature, the sea, God, spirits or whatever higher power(s) one worships. Many traditional Muslim villages are found on the Andaman islands, mixing peacefully with the often minority Buddhists. This sign from a tiny Ko Lipe temple sums up the general atmosphere of goodwill, respect and dignity found among islanders, whether they’re Muslim, Buddhist, Christian or otherwise. Sounds good to me.

Major religions play a central role in the life of many islanders, but they are often fused with spirit and ancestor worship, which are perhaps a more universal religious force on the islands. While many of the Moken people adhere loosely to Christianity after being swayed by Methodist missionaries in the 20th century, their indigenous spiritual roots continue to thrive.

As part of these traditions, Moken people craft statuettes resembling totem poles, which they believe to be embodiments of the spirits of those who have passed on. The statues are positioned to directly face the sea, and they’re believed to protect villages from periodic ferocious storms caused by angry ocean spirits. I found this one from Ko Surin to be particularly eerie — perhaps there really is someone or something gazing out from another dimension. If I were an ocean spirit, this lady would give me the willies.

Typically, what’s pictured and written about the Thai islands relates to white sand beaches, pristine waters, lavish resorts, scuba diving and holidays in paradise. All of these are in ample supply in the Andaman Sea, but what’s often overlooked is the modest lifestyle of the people who call these islands home.

As traditional mainland cultures are increasingly threatened by consumerism, materialism and modernisation, the rich cultures of the Thai islands — and in particular the smaller, less touristy ones — seem to carry on their traditional ways contentedly unaware not only of what’s happening on the mainland but also of the handful of tourists who pass through each year. So next time you’re in the islands, make an effort to appreciate the people who dwell there, as they are the creators and keepers of that peace and tranquility that so many travel thousands of kilometres to find. A smile to remember.