Thailand’s Isaan region has been occupied since at least 6,000 years ago, when hunter gatherer tribes first migrated over the Phetchabun ranges from central Thailand, archeological work at such sites as Ban Non Wat in the Mun Valley in Khorat, Nok Nok Tha in Khon Kaen and Udon’s Ban Chiang has shown.

Fertile valleys such as the Mun and Chi provided ideal conditions for more permanent settlements and a relatively advanced early civilisation became quickly established; UNESCO describe World Heritage-listed Ban Chiang as the most important early site in Southeast Asia. The local abundance of salt — a vital commodity at the time — was also a big plus for trade. General view of Wat Phu looking towards the Mekong River

The picture that emerges in Isaan by the beginning of the first millennium CE is of a series of autonomous chiefdoms based around rice and livestock farming and with extensive trading networks stretching into what is today Vietnam and central Thailand and south to coastal settlements on the Gulf of Thailand. The population at this time would have been predominantly of the Mon/Khmer ethnic group.

Inevitably some of these chiefdoms grew more powerful than others and the early Khmer proto-city state based around Wat Phu in southern Laos was to have the most influence on the region. The decline of the Mekong Delta-based Funan civilisation to the south allowed what was probably formerly a satellite kingdom to assert itself, and rulers of the ancient city of Shrestapura near Wat Phu began expanding their territory south down the Mekong, westwards up the Mun and Chi valleys and south over the Dandreks into northern Cambodia. 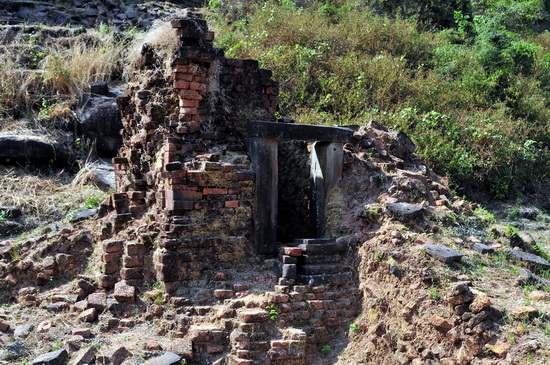 In the mid-sixth century Bhavarvarman established the city of Bhavapura at what is today known as Sambor Prei Kuk in north central Cambodia while his brother Mahendravarman attempted to exert control over the southern Isaan area from his power base at Wat Phu, though it probably wasn’t until the reign of the powerful King Ishanarvarman (611-628) that anything resembling an empire was established. (We say probably quite regularly since much of the early history of this region is still fiercely debated by scholars.)

This early polity included the Mekong Valley, north from Cambodia’s Tonle Sap and the lower Isaan region and indeed the name Isaan is thought by some historians to mean “land of Ishana“, derived from the Sanskrit name of the king Ishanavarman. Throughout the Angkor and pre-Angkor (or Chenla) periods, northeastern Thailand was an important province of the empire as testified to by the abundance of ruins from that period found right across Isaan. A royal road led from Angkor to the northern capital at Phimai and modern towns such as Surin, Buriram and Khorat plus sites such as Phnom Rung/Muang Tam were important cities. Several of Angkor’s rulers were certainly from northern families. Throughout this period Isaan remained predominantly Mon/Khmer in ethnic make-up and it wasn’t until as late as the 13th century that Thai and Lao (from the greater Tai ethnic group) began migrating into the area from southern China and northern Vietnam. Their migration coincided with the decline in the Angkor civilization so as Thai groups began to increase their influence over western Cambodia, Lao groups moved into the Mekong Valley and northern and eastern Isaan. The Dien Bien Phu region, northern Vietnam, one of the starting points of the Tai migration south.

This was to form the basis of the region’s ethnic mix we see today, with the Khmers reduced to the southern districts of Ubon, Si Saket, Surin and Buriram provinces and Thais with a greater presence in western regions such as Khorat. Apart from Thai and Sino-Thai populations in the urban areas, much of the remainder of the northeast is inhabited by Lao people and indeed it’s a frequently heard and true comment that there are more Laotians in Thailand than there are in Laos. (Other important minorities in the region include the Mon/Khmer Suai people of Surin and Si Saket.) 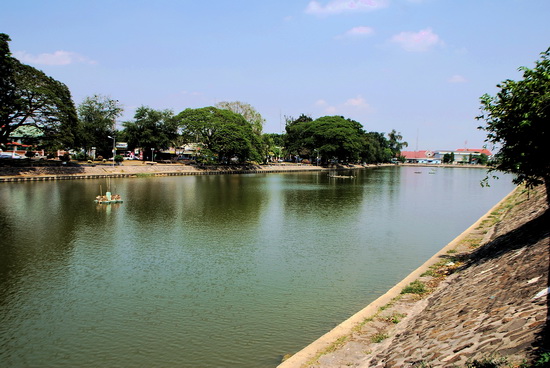 This popular Surin picnic spot was once the Angkor period city moat.

Politically however the region has swayed between Lao and Thai control with the borders only being defined (and as at Preah Vihear still occasionally disputed), during the French Indochina protectorate period of the 1860s. Until then the Lao provinces east of Khorat, including much of what is now Laos itself, was ruled from Bangkok.

The Siamese had little choice but to agree to French terms which designated the Mekong River as the border and while allowing Bangkok to retain control of Lao provinces west of the river demanded the removal of all Thais and vestiges of Thai control east of the river. The Thais withdrew, taking a large amount of the population over the Mekong with them, which is why today any map will show you a string of large riverside towns on the Thai side and a sparsely populated Lao side. 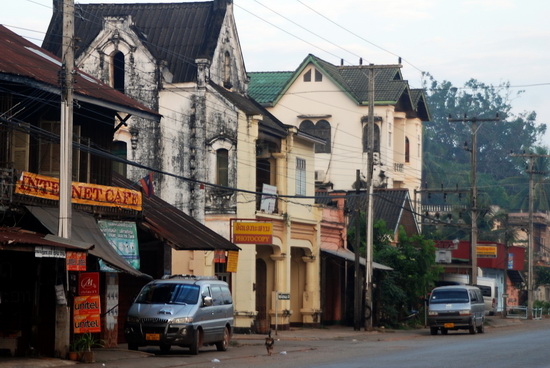 Tha Khaek, one of the old French period riverside ports in Laos.

In recent times the Isaan provinces and people have become thoroughly integrated into mainstream Thai culture and society but in the next post we’ll look at the distinctive music and of course famous cuisine of the region, which in particular help to maintain an Isaan identity in 21st century Thailand.