Phrases every visitor to Thailand should know: Sabai

Phrases every visitor to Thailand should know: Sabai

We previously explored the deeply layered meanings of mai pen rai and jai yen. Now it’s time for our last Thai phrase that comes in handy in the kingdom but is also not so easy to translate. Perhaps no single word captures the spirit of Thailand better than sabai. Sabai most definitely extends to the animals of Thailand.

Though it’s most often translated as “relaxed“, sabai has many uses. The most simple is “comfortable“, as in kao-ii nii sabai or “this chair is comfortable”, but “physical wellness“, “tranquility“, “happiness“, “contentment” and even “inner peace” are all tied somewhere into the many layers of the word.

Sabai dii mai? is a common Thai greeting that’s typically translated in phrasebooks as “How are you?”, though a more literal translation would be, “Is everything well and good?” The standard reply is “sabai dii“, or an affirmative “well and good”.

The word is often repeated twice, as in sabai sabai, to emphasise that everything is really just great and couldn’t be better. You’ll also hear sabai sabai used as a way to describe a relaxing environment. The word nang means “to sit” — if someone invites you to nang sabai, it’s their way of saying “please sit back and relax”.

In relation to people, sabai could be viewed as a sort of optimal status quo according to the Thai cultural view. Mai sabai, or not sabai, is the Thai way of saying “physically sick”; the fact that illness is the opposite of sabai hints at how important the ideal is to the Thai sense of stability and peace. Keeping things relaxed is a necessary aspect of happiness.

Generally speaking, Thai society values taking it easy far more than might seem “normal” to many Westerners. In the US, for example, the generally accepted status quo is to constantly keep busy. When Americans say things like, “I’m so busy, I have so many things to do”, it’s usually perceived within the society to be a good thing in the sense that the person must be “successful” or “important” if they’re so busy. For better or worse, being rushed, stressed and overwhelmed is the normal, and even admirable way to live in America.

In Thailand, it’s the opposite. To be able to say that, “I have nothing to do!” is considered enviable in Thai society. To lie around in a hammock all day would be considered lazy in many parts of the world. In Thailand, it’s not only normal but an ideal way to be. That’s not to say that Thai society condones laziness — someone with no job or money who lies around all day while ignoring responsibilities would be viewed in the same contemptuous way as they would in most places. But if the work is done, or the fortune has already been made, Thai society encourages simply lying back and chilling out.

One thing you’re sure to notice in Thailand is how even city-dwelling Thai people walk at a very slow pace compared to most Westerners. Why? Because even during the hustle of a work day, they wouldn’t imagine breaking the status quo of sabai by rushing around.

After spending time in places like New York City, I was mystified by how even Thai businesspeople in Bangkok almost never seem to be in a rush. At first, I thought they all must be masters of time management, but in fact, it’s just the warm blanket of sabai draping itself over the city. (For some reason, however, this doesn’t extend to Thai driving habits.)

Of course, this exceedingly relaxed pace can be frustrating from a Western perspective. “Why are they walking so slow and clogging up the already cramped footpath!? Don’t they care that I have a plane to catch!?” If you’ve spent much time in Bangkok, chances are you’ve had similar thoughts — at least until you learned that since you can’t get around the slow walkers, you might as well join them.

While travelling in Thailand, do yourself a favour and give in to the laidback flow. Walk slowly. Stay relaxed. Don’t raise your voice. And don’t feel like you’re doing something wrong by waking up that tuk tuk driver when you need a ride somewhere. Don’t fight the sabai of Thailand. Yes, it can be frustrating. But it’s also part of its magic. 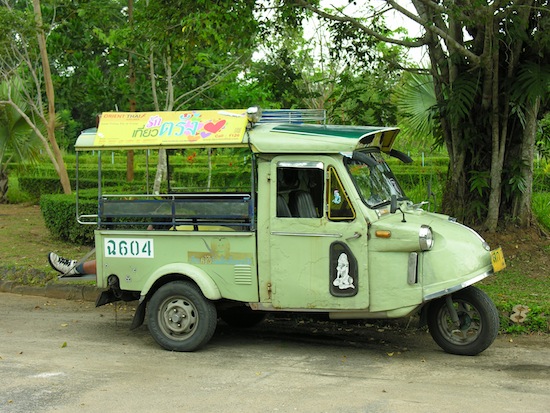 Even for those Westerners who accept (or fancy?) this ultra chilled way of life, it can be easy to confuse the sabai ideal with laziness given all these slow steppers and midday nappers. Before you make that mistake, consider that the vast majority of Thai people work far longer hours than the average Westerner. Whether a rice farmer, server, teacher or taxi driver, chances are they work 10 hours a day and often six or seven days a week. It’s just that the work is approached differently than in the West.

Around the country, vendors set up shop on footpaths day and night. Although they do it to make money, work time is also social hour, and between one sale and the next, it’s also time to relax. Even in more “corporate” office settings or hands-on work such as construction, work and relaxation are not necessarily viewed as polar opposites. It’s not that work doesn’t get done efficiently, rather that it’s done with a relaxed attitude that pervades entire workplaces.

To rush and stress over work is simply not considered a good way to get things done in Thailand. It’s only a way to — gasp! — lose the balance of sabai. If you think about it, once “wellness” has been replaced by stress and anxiety, can the work truly be deemed beneficial from a human point of view? Perhaps this is a clue as to why Thailand enjoys one of the world’s lowest unemployment rates? Maybe the West could even learn something from sabai? Sabai is also closely related to the Thai words, kwaam suk, or “happiness”, and sanuk, or fun. A sabai atmosphere or disposition would generally need to be present for happiness and/or fun to take shape, but sabai itself is closer to what’s conveyed by the word “tranquility”. A beach chair with palms swaying in the breeze and plenty of cool drinks at hand — that’s sabai.

Yet one doesn’t need to be in paradise to discover it. When coupled with jai, the Thai word for “heart” and “mind”, sabai refers to a person who is relaxed and content. In the deepest sense, sabai can be a powerful way to stay centred throughout life’s twists and turns.

In this context, sabai rubs shoulders with the last phrase we looked at, jai yen, or “cool heart”. Jai yen refers explicitly to “keeping cool and composed” in tense situations, but that very “coolness” is hinted at in sabai. This doesn’t refer to “protecting” or “blocking” oneself from any stresses that might topple a sense of relaxation. Rather, having sabai jai is all about staying mentally relaxed, flexible, accepting and content no matter what might be happening externally. Internalise this and you’ve got sabai jai.

In Thailand, this is considered a powerful yet peaceful state of mind that only comes in any lasting degree to the wise and spiritually adept. Even if one with deeply rooted sabai jai finds them self in the most stressful or dangerous situation imaginable, they’re able to find that tranquil beach chair within their heart and take a seat under the swaying palms. Sounds like it’s worth a try, doesn’t it?