Picture a village inhabited by all the different types of Thai fruit. A group of exuberant young grapes and rambutans goof off as pretty lychees and strawberries giggle. A cheerful rose apple works in the garden as well-dressed pineapples gossip with ripe papayas about the carefree oranges, mangoes and coconuts mixing it up on the beach. An awkward banana sits away from the others, deep in thought, and withered old melons gripe about “grapes these days”. But when the durian comes to town, everyone drops what they’re doing to pay respect to this, the undeniable king of Thai fruits.

The spiky outer shell of a durian wouldn’t look out of place in a medieval weapons museum, and in the old days warriors used durian shells as helmets for protection in battle. Okay, I made that up, but it seems like a good idea, especially considering the fruit’s notoriously repugnant scent would be enough to scare off most enemies. Despite a smell deemed so foul by so many that there’s an effective ban on bringing durian inside hotels and public buildings across much of Asia, the texture and taste of the fruit often become an obsession for those who give it a try. 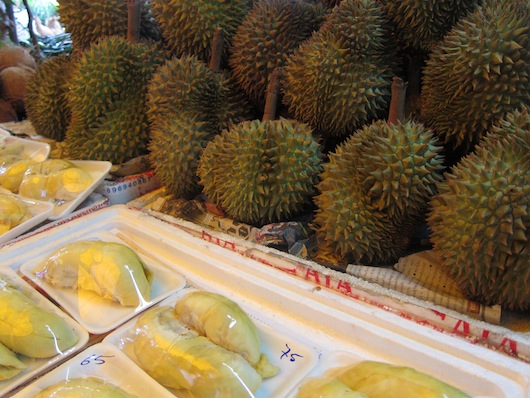 Make way for the king.

I could stay up all night attempting to describe durian’s flavour, but I wouldn’t come close to how it was waxed lyrical about by 19th century British naturalist, Southeast Asia explorer and durian fanatic, Alfred Russel Wallace:

“A rich custard highly flavoured with almonds gives the best general idea of it, but there are occasional wafts of flavour that call to mind cream-cheese, onion-sauce, sherry-wine and other incongruous dishes. Then there is a rich glutinous smoothness in the pulp which nothing else possesses, but which adds to its delicacy. It is neither acid nor sweet nor juicy; yet it wants neither of these qualities, for it is in itself perfect.” Of course, many can’t get over the pungent scent of the fruit, and experiencing durian has also been compared to enjoying “the most delicious vanilla in a public lavatory”. Whether you love it or hate it, you will surely take notice of the durian in all its stinky glory, and indeed its stench plays a prominent role in durian mythology.

One Thai legend tells of an aged king who asked a mystical forest dwelling hermit for help when the king’s young, forced bride didn’t love him. The hermit provided a mysterious seed, instructing the king to plant it in an auspicious plot of his palace garden. A tree soon sprouted, and in time it bore a spectacular, smooth textured, sweet tasting, heavenly scented fruit. When the young queen took a bite, the old king appeared youthful and handsome to her, and she fell in love with him immediately. However, the king failed to reward the hermit for his help, and the hermit soon grew bitter towards the king, casting a spell over the tree that rendered its fruit foul smelling and ugly with a thick, spiky shell. Needless to say, from then on the queen was repulsed by the fruit, and the king.

A hilarious Thai-Chinese legend has more of a happy ending. In it, the actual historical Chinese naval captain, Zheng He, is said to have led a 15th century expedition to meet the Siamese in what is now Thailand. After arriving, his accompanying soldiers grew listless in the tropical heat, and Zheng He fell ill with an upset stomach. As the story goes, the infamous captain defecated in the forest before wrapping a piece of his excrement in a leaf and hanging it from a tree. Zheng He must have possessed some magical powers, because he swiftly transformed his “work of art” into a delicious fruit and gave it to his soldiers, raising their morale and granting them unprecedented levels of strength. Zheng He couldn’t quite hide all hints of how the original version must have smelt, but this apparently didn’t bother the soldiers. On a somewhat more down to earth level, durian is believed by many to be a natural aphrodisiac, and it’s said that consuming alcohol while digesting durian can result in sickness or even death, although I’ve done it and lived to tell the tale. Durian is also believed in Thailand and much of Asia to increase one’s body temperature, so it’s often eaten alongside mangosteen, which is believed to have a cooling effect on the body. Not surprisingly, then, while durian is regarded as the king of fruits, mangosteen is known in Thailand as a most sweet and elegant queen.

Nutritionally speaking, durian is a great source of vitamin C and potassium, although it’s not a light fruit for when you’re on a diet. Every 100 grams of durian contain 27 grams of carbohydrates and a whopping (for a fruit at least) 5.3 grams of fat. In flavour, texture and nutritional value, eating durian is closer to the experience of indulging on cheesecake than a crisp, juicy fruit.

Along with Malaysia and Indonesia, Thailand is one of the world’s largest durian producers, with the best of them coming from the Rayong and Chantaburi areas in the southeast; a World Durian Festival is held in early May each year in Chantaburi. Including more recent crossbred varieties, there are some 300 unique types of durian available, but Thailand has settled on a handful of favourites. See why helmets are advisable when walking under durian trees?

Gan yao is among the most prized variety thanks to its large size, small seeds, rich but pleasantly subtle flavour and less overpowering scent. Gan yao can be distinguished by a long, thin stem, and they can cost as much as 1,000 baht per kilo, making them also known as rich man’s durian.

Short, stumpy-stemmed mon tong are the go-to durian for many Thais. These boast a large size along with a rich, creamy yellow fruit, and they’re easily produced in large quantities, keeping the price at a manageable 100 baht per kilo. Due to their less pungent stench than other varieties, mong tong are also highly marketable, and won’t make your kitchen smell like dead animals after bringing them home.

Other examples include the smaller, cheaper and stinkier cha nee, which are considered the poor man’s durian. Long lap laa are a small type of little produced but highly prized durian grown mainly in the Uttaradit area of Thailand, and phuong mani are known for a distinct orange-gold fruit with a subtle flavour, but still plenty of stench.

During durian season from May to August, the thorny green king can be found at numerous streetside stands, in markets and in grocery stores throughout Thailand. If looking for a place in Bangkok to sample some of the rarer and pricier varieties, make your way to Or Tor Kor market and look for a stand (pictured in the second photo down in this post) run by durian guru, P’Thoy, who’s been selling more than a dozen types of durian from his family farm in Rayong province for 40 years.

If not quite ready to dive into durian headfirst like these crazy fools, more subtle tastes of the fruit may be enjoyed in a range of creative adaptations. Young durian is sliced and salted into potato-chip style snacks; not at all stinky and perfect for munching on a long bus ride. Durian ice cream typically has a strong flavour but without the stench, and it makes for an unusually memorable pick-me-up on a hot day. I couldn't wait to open the bag.

We recently tried some sublime durian cheesecake that offered enough of the fruit’s notorious flavour to make you either quit after one bite or order another slice, depending on which side of the durian fence you’re on. It’s also possible to score durian juice, durian jelly and even fried durian fritters in specialty Southeast Asia markets.

On the more traditional Thai side of things, durian with coconut sticky rice is an indulgent if painfully sweet dessert in case the mango version is too wussy for you. And finally, we’ve been hearing whispers from Southeast Thailand of shredded, young durian being incorporated into a som tam style salad. That’s right, durian som tam! So, when’s the next bus to Chantaburi?

Next time you’re in Thailand, or the other durian enthusiast enclaves of Malaysia and Singapore, don’t pass up the endless streetside pick up trucks and stands (or are they chariots and thrones?) offering a taste of stinky, cream coloured royalty. If you can get over the scent, you may soon find yourself pacing frenetically through Bangkok’s streets in the middle of the night searching for a fix (“need… more… durian…”). When you find it, these words might enthusiastically ascend from out of nowhere as you claw at the sharp shell with your bare finger nails: “Hail, durian, king of Thai fruit!”

*Many thanks to P’Thoy for sharing his expertise and durian legends, to this and this online durian information source, and to Chinnapatt Chongtong for her help with researching this post.