We’ve written before about grabbing a seafood dinner at Jimbara in southern Bali, and we’re sorry to say that here we are writing about the same meal (yes, seafood barbecue) at the same place (Cafe Bagus, though now it’s Cafe Made Bagus), on the same piece of beach (Four Seasons end of Jimbaran beach). Why? It’s that damn good. It is all in the name.

More than a dozen seafood barbecue places line the beach here at the southern end of Jimbaran beach, and while it does have a decidedly touristy tilt (with higher prices than what you’ll pay elsewhere) the food is that good and the sunsets so spectacular that if you’ve got to pick one evening to embrace your inner tourist in Bali, this is it.

Depending on the season and the weather, Jimbaran is a great beach for kids. It has a broad, very shallow drop-off and generally quite gentle waves, meaning it is an excellent choice to let young children play in the shallows in a way you might be uncomfortable with at one of the rougher surf beaches. And for those who can’t swim, there’s plenty of find sand for building sand castles and so on. Be it swimming, playing in the shallows or building Boroburdur out of sand, it’s a great way to work up an appetite. 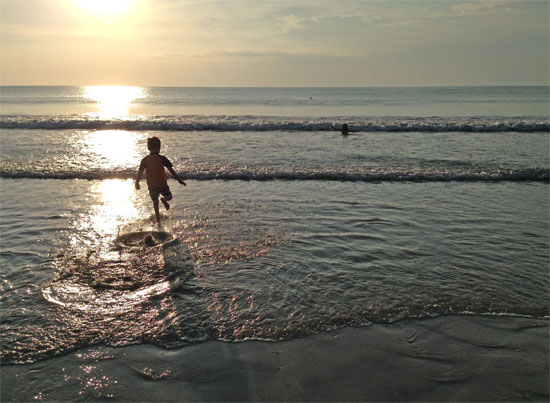 Working up an appetite.

Jimbaran gets the full brunt of the setting sun, so unless you’re a hardened sun worshipper, arrival anytime before 16:00 will require a litre of sunscreen — we tend to aim for between 16:00 and 17:00 as that’s still early enough to get a table near the front and to give the kids time to run around without being too burned by a too-high sun. While most places will deliver food throughout the day, they tend not to really get going till around 17:00. Luckily, iced cool drinks are available earlier. 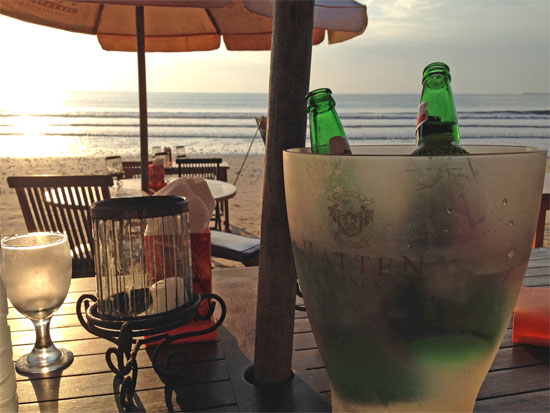 Now that is how you serve beer.

The beach restaurants at Jimbaran range in quality from the quite upmarket, fancy and pricey, through to the basic, more down to earth and cheaper options. Made Bagus is definitely at the latter end of the scale and their kitchen sums it up pretty well. Fish (bought from Jimbaran fish markets every morning) are kept on ice in styrofoam boxes until ordered. 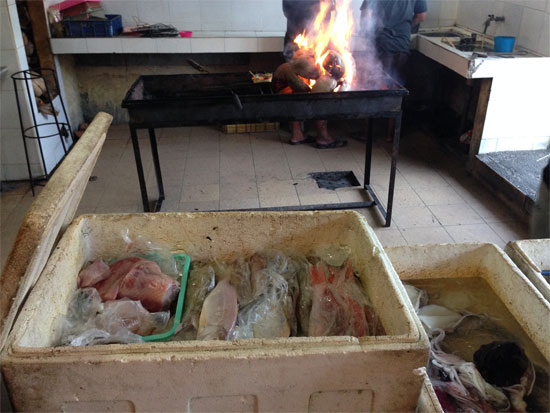 Where it all happens. The barbecued fish will be smothered in a slightly spicy “Jimbaran sauce” so if you’re not into any spice at all mention that when ordering. Dishes also come with more sauces and sambal on the side that you can apply as you wish. It’s not just barbecue — we get the squid fried and some places will steam fish if you want, but generally a seafood dinner here is all about the barbecue. As mentioned above, prices can be a little higher than what you’ll pay elsewhere in Bali (at Made Bagus we pay about 50,000 rupiah for a decently sized snapper) but if that is going to break your bank — or if you’re just not into seafood — then there are roving snack vendors selling barbecued corn which you can munch away on while sitting on the sand enjoying the sunset. 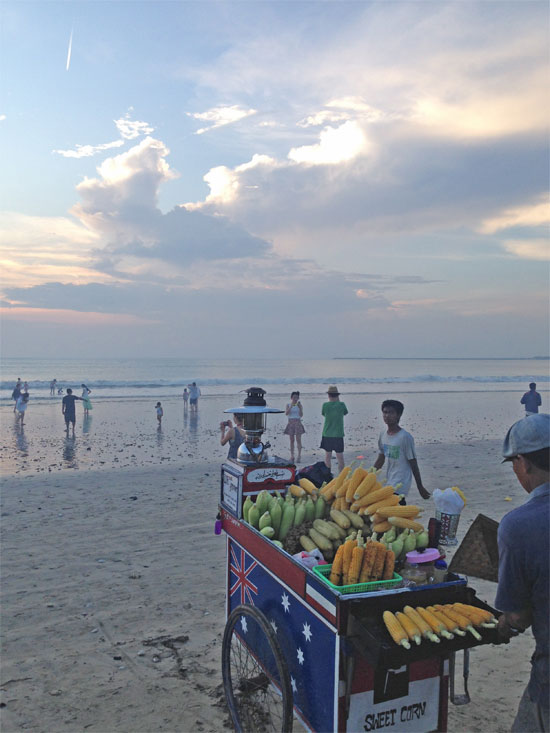 At Made Bagus, food is served up super simple. No fancypants dining here, though they have started delivering the large beers in a wine cooler — inspired! Reusable plastic plates and paper napkins are set out on the table, and meals include rice and green veggies on the side. Calamari as big as your head.

If that’s all not enough, then the sun starts to sink and, when it comes to sunsets, Jimbaran really delivers the goods. 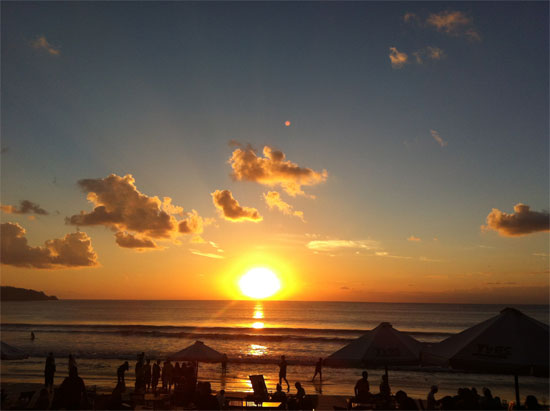 Confession, this sunset was not last night.

We’ve eaten more times than I care to remember at Made Bagus. Last night’s meal for three adults and two kids, including two large snapper, a half dozen king prawns, two squids, a plate of fries and six (cough, cough) large Bintangs came in at around the 700,000 rupiah mark.

You’ll find Made Bagus at the Four Seasons end of Jimbaran Beach; when you’re down on the beach, it is the second furthest place away from the Four Seasons (ie second closest to the airport — which is wayyyy down the other end of the beach). No need for reservations — just show up.

Our top 10 places to eat and drink around Jimbaran