In a city known for its night time indulgences, great late night street eats are a must. There are always a few noodle soup carts, grillers of pork skewers, or the flames of a fried noodle wok clustered around popular clubs and bars — but it’s more hangover cure/dancing fuel than culinary delight. But what if your long Bangkok evening revolved around food? You need a whole district devoted to food. You need Yaowarat. 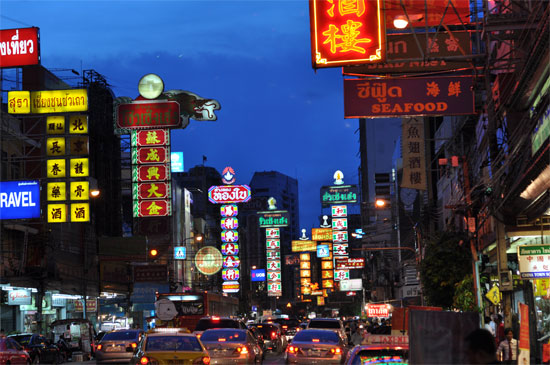 Get out of the cab and start munching.

Lots of great night-time eating can be found in Bangkok, but generally most carts are stacking the chairs and wiping down the tables by about 23:00 or so, with a few brave late nighters open until 12:30 or 01:00. Not so in Chinatown, transected by Yaowarat Road, where the vendors keep going until 02:00 or later (some spots, like Khao Thom 24, never close).

Chinatown isn’t just Chinese food. Chinatown has a long history of being the mixing pot for Thailand’s most recent big immigrant group: the southern Chinese. This immigrant group brought with them woks, new seasonings, and cooking techniques like blazing hot stir-frying. Combined with abundant Thai produce, fish sauce, fish/shrimp pastes and sour tamarind, a new category of food exploded, including the ubiquitous pad Thai and other rice noodle dishes.

Eating on Yaowarat could be started with some of the best pad kii mao in Thailand (noodles fried “drunk-style” — not with booze, but with plenty of chilli and garlic to satisfy the drinking public), served forth on blisteringly hot cast iron plates that keep the luscious wide rice noodles hot and perfectly toasted on one side. It’s spicy — if you’d like to wash it down with a soft drink they have you covered, and you are welcome to bring your own bottles of beer from the 7-eleven around the corner. Our favourite kee mao comes from Krua Pornlamai (stand name) on Plaeng Naam Road, left side as you walk down this small street, about 35 metres from Yaowarat Road. All your base are belong to us. Also, food.

Once settled with some fried noodles, it’s time for another classic Yaowarat dish: khao muu daeng (red pork rice). Khao muu is pork shank that’s been simmered with anise, cinnamon, aromatics and palm sugar until the meat is fork tender. It’ll be served up on white rice, with delicate slices of braised fat and pickled mustard greens. Don’t skip the fat; it’s the best part.

Next you'll undoubtedly come across the many street merchants roasting chesnuts. The black beads the chestnuts are roasting in is a special sand that is used to make sure the chesnuts cook evenly and right through. A small bag should set you back 15-20 baht — don’t eat too many as they will kill your appetite. 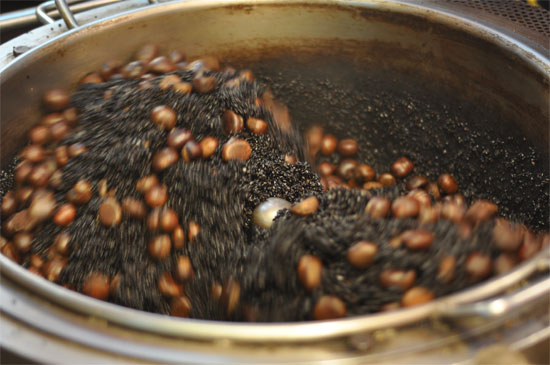 The food scene really gets going at Soi Texas (though we prefer to call it “Soi Seafood”), where two seafood joints, Rut & Lek (red shirts) and T&K (green shirts), battle it out for seafood supremacy. We’re big fans of the black pepper crab at T&K’s, but a Bangkok native waved both off and we pulled up stools at Heng’s, the next place down Soi Texas after R&L’s. Here we disposed of a plate of grilled king prawns, squid in curry and a steamed lonely crab. The prawns in particular were delicious. 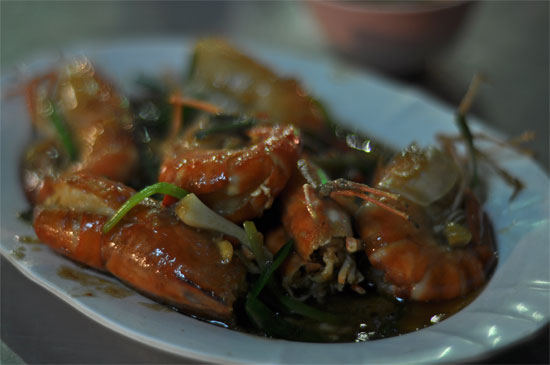 As you sit and eat at one of the endless streetside tables, the conversation invetably turns to the question: What will we eat next? Rice or noodles? Soup or fried? Two more meals or one? We settled on walking up to the other end of Yaowarat for a noodle dish, but in Yaowarat the distractions come easy. 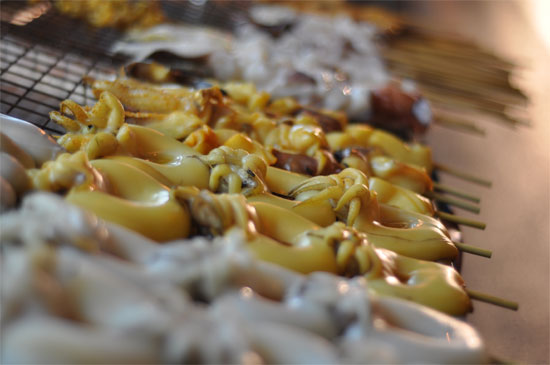 Stirring up a pad thai storm.

Or perhaps a quick plate of pad thai? 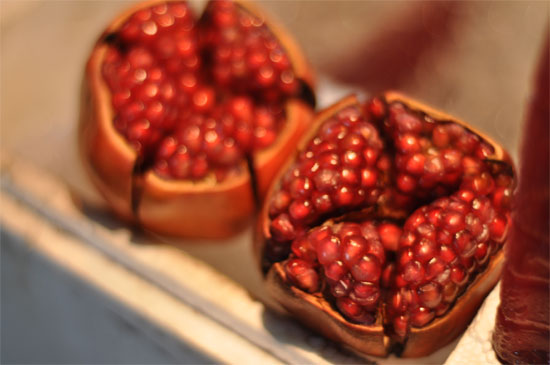 Or a pomegranate quencher? 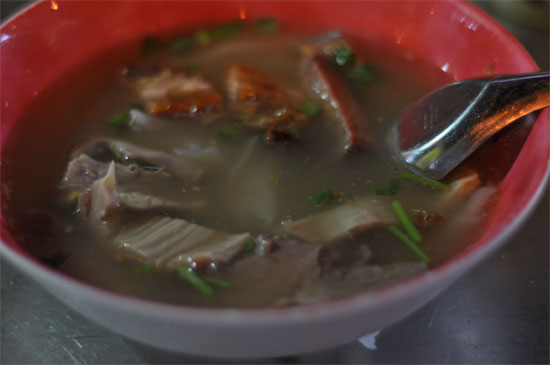 Pepper and offal to clear the sinuses.

We headed to one of the best kuay jab stalls in the area. Kuay jab is a noodle soup with wide curled noodles and all sorts of bits of a pig you probably don’t eat all that much — think stomach lining, lung, heart, liver and a couple of crispy pork chunks. But the real treat is the rich peppery broth it comes in. It sneaks up on you but will clear your sinuses (and those of anyone within 100 metres of the stall). Some of the offal is an acquired taste, but the broth itself is undoubtedly superb. You’ll find our one at Yaowarat Soi 11 (Soi Issaranuparb) and expect to wait to be seated — this is a very popular stall. Gingko on ice to cool off the pepper.

After all of the noodles, pork, pepper and spicy seafood, you might want to to cool your heels at a gingko nut joint back along main Yaowarat Road. You could go with them iced in coconut milk, or drenched in longan syrup. Both are delicious, refreshing and available from quite a few vendors, with Sweet Time being one of the most popular and easily accessible for non-Thai speakers. 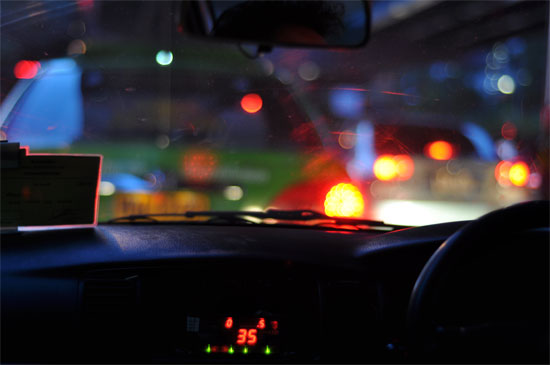 Grab a cab and sleep it off.

What’s next? Crawl into a cab and head back to sleep it off — or go get a foot massage, then do it all again.