Chinatown is no stranger to look chin pla, squishy, fishy balls that are usually served with rice noodles in a mild broth. Some of the best-known fish ball shops are found in dingy alleys, but Yoo Fish Ball serves up their signature variety at an easy-to-find, modern-style eatery right on Yaowarat Road. Don’t be turned off by the trendy decor; Yoo has been crafting fish balls for over 80 years. I never knew that fish had …

With a line of stainless steel tables and red plastic stools, ceiling fans, photos of celebrities who have visited the shop and staff wearing red aprons complete with Yoo’s catchy logo of an Asian girl holding a fish, Yoo’s decor offers slightly more than the usual hole-in-the-wall food shop. Though not exactly friendly, service is snappy. Along with the fish balls, they serve some interesting Thai and Japanese desserts to go with bubble tea.

The single-page menu boasts 25 different fish ball dishes, mostly noodle soups, each with a picture and English explanation. All selections cost just 30 to 50 baht. If you only want the fish balls, order a platter served with a sour and spicy chilli-lime dipping sauce. The only things that separate one noodle dish from the next are often thin or wide rice noodles, broth or no broth, or hot sauce or no hot sauce. 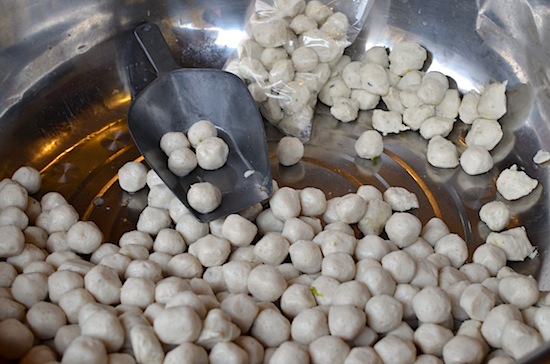 We went with Ta Mee, a dry (broth-less) dish of egg noodles with Yoo’s house-made fish balls and a spicy Thai sauce. In a whole different universe from the factory-made fish balls (who knows what they put in those) found at most Bangkok noodle carts, Yoo’s are hand-made daily from Spanish mackerel, garlic, pepper and other spices. With just the right amount of bounciness, the balls are savoury and don’t leave a fishy after-taste. 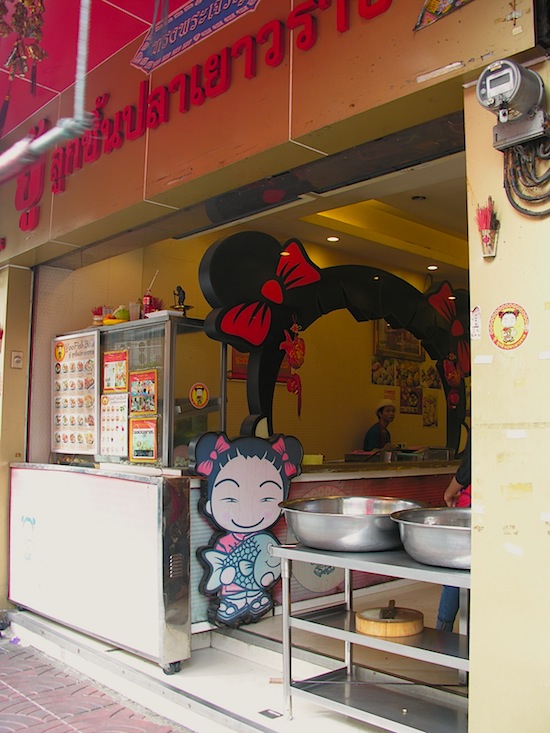 Along with four plump “normal” fish balls, the dish included one deep-fried fish ball, one strip of fish cake, a deep-fried roll filled with tofu and taro, and steamed morning glory. The only part we weren’t too fond of was the bright red chilli sauce that obviously came from a bottle. Next time we’ll try the soup. A single bowl makes a good snack, but we’d need two or three to fill up.