For many of us, pick-up trucks conjure thoughts of country roads, farmers and landscaping. Those accustomed to Thailand, on the other hand, might associate them with piles of tropical fruit, uniformed kids on their way to school, or even a street kitchen on a bustling urban corner. In Bangkok’s Chinatown, Jay Ben Noodle proves that the sight of an old pick-up can make your mouth water.

Jay Ben tosses up some of the city’s most irresistible wok-fried noodles out the back of a rusty Japanese pick-up that looks to have been around since Jay first started slinging four decades ago. The truck sits stationary within sight of the Odean Gate in Chinatown’s southern reaches, a constant stream of local diners ensuring that, if it’s broke, there’s no need to fix it. 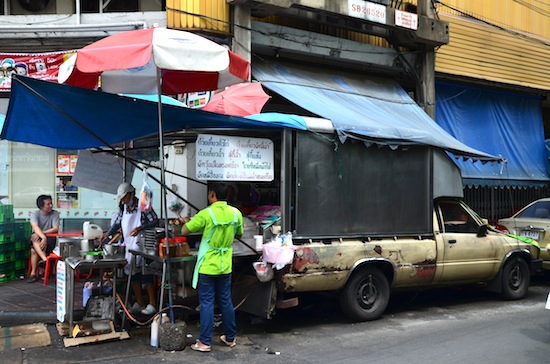 Street food in its purest form.

Half a dozen dented red tables sit with plastic stools as rumbling tuk tuks and Vespas set the soundtrack. Two staff members usher iced chrysanthemum tea to customers, who might also pop into the adjacent 7-eleven for a beer or bottled water. With an occasional burst of flames, Jay’s sizzling “wok breath” induces hearty sneezes from customers and passersby.

The signature dish is kwit-tieau pad ngee ngao, a close cousin of pad kee mao, the “drunk as shit noodles” served in practically every Thai restaurant in the West. The name translates into English as “stupid stir-fried noodles” because any idiot who can turn on a stove can throw it together in some form — just as any old drunk can whip up a bowl of kee mao. But Jay Ben is neither an idiot nor a drunk. 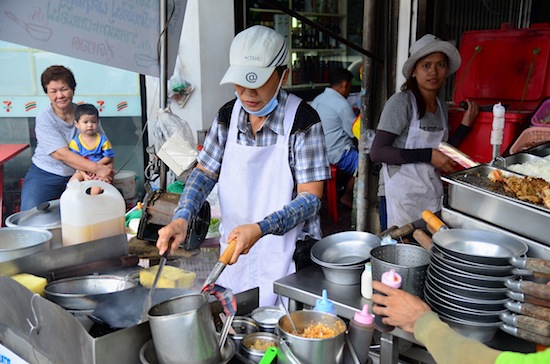 Turning this typically unsophisticated dish into one of the tastiest things you’re likely to try amid one of the world’s great food neighbourhoods requires not only some intelligence, but also years of experience and a natural knack for flavour. The verdict from our taste buds: Jay Ben is a genius.

In a city where most street chefs use propane stoves, Jay Ben super-heats her wok with a distinctive charcoal that infuses smoky tones into each dish. She then throws in a handful of wide rice noodles, eggs, shiitake mushrooms, pig’s kidney (they taste like the perfect pork meatball) and seasonings to go with big, fresh prawns that are marinated and slightly grilled beforehand. Squid is another usual player, though it had already run out when we stopped by around 13:00.

After a quick scorch in the wok, the finished dish is presented over a piece of lettuce in a shiny steel bowl with a handle. Neither too sweet nor laden with MSG, all of the ingredients blur together in each gooey bite, thrilling the tastes buds and sticking to the ribs. This is Chinese-Thai comfort food at its best. A sweet-and-spicy sauce is served on the side, though the only condiment we reached for was the green chillies in vinegar for a splash of acidity to compliment the richness. 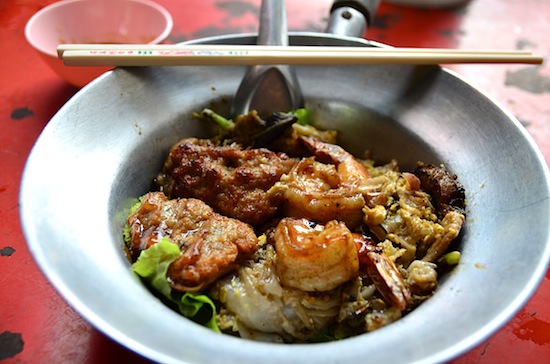 Doesn’t look stupid to me.

Jay Ben uses better-than-average ingredients (evidenced most obviously by the chunky prawns), resulting in a 100 baht price tag for a full portion of kwit-tieau pad ngee ngao (half portions are also available). Those on a tight budget can tuck into kwit-tieau kua kai, a similar wok-fried noodle dish made with chicken rather than seafood. You’ll also find suki heng, glass noodles tossed with egg, morning glory and choice of protein.

To find out just how enjoyable “stupid” food prepared on a pick-up truck can be, follow Yaowarat Road to its far southeastern end until you see the giant Odean Gate in the centre of the traffic circle. Head straight south, hopping over Yaowarat Soi 3 and Tri Mit Road, and you’ll see Jay Ben’s rusty pick-up parked in front of a 7-eleven at the top of Yaowarat Soi 1.

Alternately, take Exit 1 out of Hualamphong MRT station, walk straight at the top of the stairs, bear left and cross the road at the crosswalk, take the canal bridge and hang an immediate right on the other side, and then the first left onto Mittraphap Road, passing by Wat Traimit. Walk to the left when you reach Odean traffic circle, and Yaowarat Soi 1 will be the second left.