Not surprisingly, some of Bangkok’s best-value Indian food can be scored in Pahurat, or Little India, though it takes some courage to hunt for it amid the tangle of alleyways and fabric shops. Down one nondescript lane, Toney Restaurant dishes out cheap but delicious food in a pavement-side eatery. Time to dig into Pahurat.

Situated at the corner of two sign-less lanes near a canal that you can’t actually see due to a high wall, Toney is the sort of place that you’d walk right past if you weren’t looking for it. With only a few six-seat white tables, the open-air dining area gets its ambiance from a TV tuned to excruciatingly dramatic Indian shows, green fairy lights next to a couple of Buddha images, a ceiling fan and bamboo forest wallpaper. The occasional passing motorbike and wandering granny make you feel like you’re part of the neighbourhood.

Most of the clientele are locals, though the restaurant also draws a dedicated group of Indian-food-loving Western expats. A staff member rolls the roti (unleavened wheat bread) by hand off to the side of the alley, in front of a tiny open-fronted kitchen across from the dining area in a separate building. Customers are welcome to pop their heads inside to see what smells good.

Pahurat is traditionally known for its northern Indian Sikh community (as opposed to the mostly southern Indians down in Silom), but these days the area is very diverse. At least one of the staff members at Toney is Burmese, while the half-dozen photos of Mt Everest may hint at Nepalese roots (or maybe just an enthusiasm for the Himalayas). I’m no expert on Burmese or Nepalese cuisines, but the food was unlike anything we’ve had in Indian restaurants before.

Whatever the origins, the flavours are worth going out of your way for. We tried a chicken curry (85 baht) that was very tasty and light, at least compared to the soupy, clarified-butter-drenched versions that are common in Indian restaurants. The chicken was tender, though we did need to work out some tiny bits of bone. The dish might be too salty for some, though I loved every bite of it. 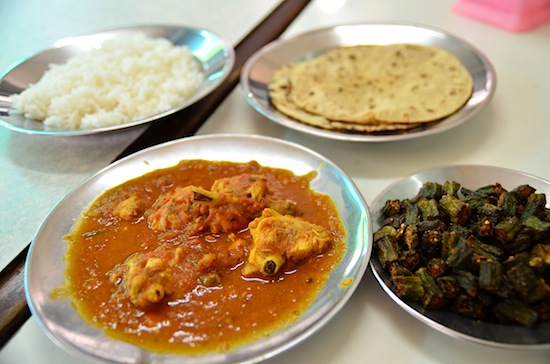 Makes me want to go back for more!

Also served on a shiny stainless steel platter, the aloo bindi (40 baht) was seasoned with dry spices before going for a quick toss in a pan. No liquid sauce was involved, and each bite-size piece of okra popped with flavour. Again, the saltiness may overpower some palates, but we found both dishes very satisfying with hefty sides of steamed white rice and roti still hot from the grill. As we dug in, the server dropped off a complimentary bowl of fresh cucumbers in a tangy and spicy lime-chilli sauce to round out the meal.

The small menu has just over a dozen dishes on both the vegetarian and meat sides, most of them recognisable to anyone whose eaten at a few Indian restaurants. Yet the food itself doesn’t fall in line with the norm. We’ve come to expect Indian meals to sit heavy in the stomach but felt perfectly balanced after eating at Toney.

While no nan is served here, the handmade roti is accompanied by several types of paratha (pan-fried unleavened wheat bread stuffed with various ingredients) and paneer (Indian cheese usually grilled with spices or served in a curry). The place also does a solid masala tea along with beer, soft drinks and lassi available in “simple” or “salt” varieties (no mango or pineapple here). Service was no less attentive or courteous than we’ve experienced in upscale Bangkok restaurants.

If you prefer an air-con setting, Royal India Restaurant does solid northern Indian fare around the corner. On the same alley, we also saw a couple of hole-in-the-wall vegetarian restaurants and sweets shops that we’ll be sure to try in the future.

Kudos to Mark of Migrationalogy.com for first sharing Toney Restaurant with the net-surfing world.

Travel info:
Toney is situated at the end of a sign-less alley that cuts east off Chakphet Road, a main thoroughfare through the Pahurat area. From Memorial Bridge (aka Saphan Phut) pier along the Chao Phraya express boat line, head straight north from the pier, cross the street and walk immediately up the cement stairs, then keep to the right side of the street. Hop over the one-lane road and hang a right in front of Wat Ratchaburana, which will take you to the west side of Chakphet Road. Cross the street when possible and walk a couple of hundred metres until you see a large sign for Royal India Restaurant on the right. After you pass that sign and the accompanying alley, take a right into the next alley up (marked by “S.B. Travel and Trade” at the corner). From there walk straight up the alley and you’ll find Toney’s nondescript dining space immediately after hanging a right at the end.