Defined by piles of fresh fruit, bundles of flower garlands and charmingly dilapidated houses, the area around Thewet pier and market is one of the most colourful in Bangkok. This is where you’ll find Steve Cafe and Cuisine, serving quality Thai fare on a deck next to the Chao Phraya. It’s a great option if you’re after a relaxing riverside atmosphere and don’t mind paying for it. 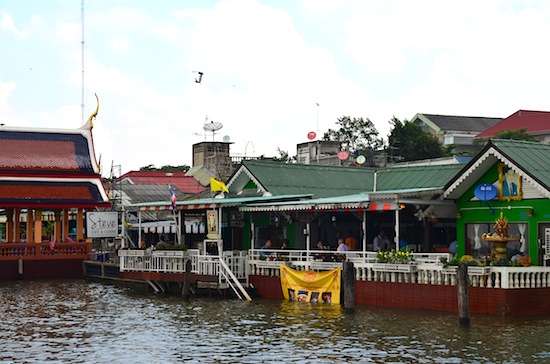 Great setting for a splurge.

Named after the Thai owner’s English nickname, Steve is very accessible for foreigners but also popular with Thais. During our visit, other patrons included a pair of British business-types, a few Western backpackers, a well-dressed Thai couple and a group of local policemen. Accustomed to serving all sorts of different people, the English-speaking staff are prompt and patient.

Atmosphere is a big selling point. A large roofed deck perched over the river and an air-con dining room both afford views of Rama VIII Bridge and the Chao Phraya express boats that stop at neighbouring Thewet pier. Fish teem in the water and pigeons crowd overhead. The place is cheerful and relaxing, with a soundtrack that included Ella Fitzgerald’s Summertime during our visit. 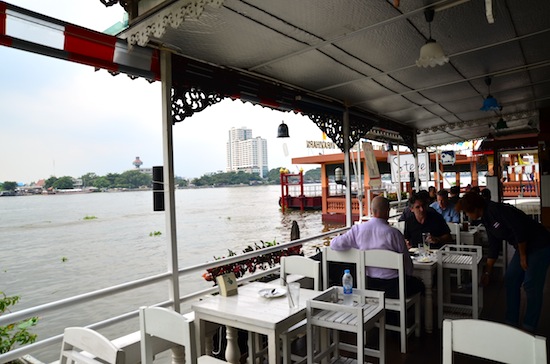 Can’t eat that last spring roll? Throw it to the fish!

While the ambiance makes this a fine place for a glass of wine, orange vodka soda, roselle juice or fresh coffee, the food is also very good. The chef’s Southern Thai roots are evident in selections like gaeng luang sai bua (spicy yellow curry with lotus stems), gaeng pa (jungle curry) and coconut milk soup made with pak lieng, an aromatic leafy green that thrives in the Malay peninsula. Specials included a som tam-style salad made with santol fruit.

The huge menu branches into some fairly eclectic territory (deep-fried cheese, fried ostrich sausage) while including plenty of Western-Thai favourites like prawn spring rolls and fried rice prepared in enough different ways to fill up a page. Seafood options include sea bass, whole Thai river fishes, salmon and squid balls. Our yum ped yang (grilled duck salad) with a lime-based dressing was well-balanced and spicy, though the duck was on the tough side. 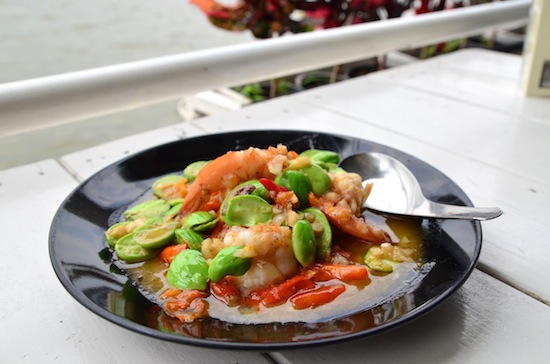 Our advice: stick to Southern Thai options like this stink bean dish.

We also tried the Southern Thai staple, pad pak sataw, or “stir-fried stink beans” with prawns. Chock full of garlic and chillies, the brown sauce had some good heat and was very tasty, and the stink beans were crisp enough to allow the distinctly astringent flavour to come through loud and clear. Prepared with four large prawns (definitely not the frozen kind), the dish was excellent. 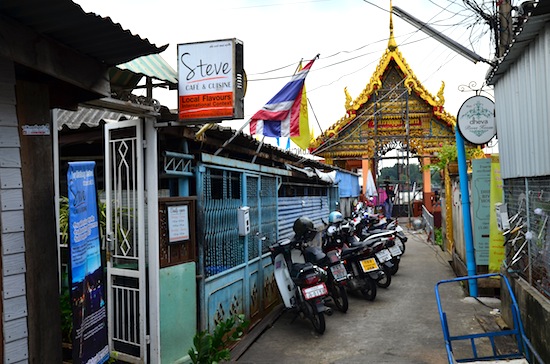 Prices start at 90 baht for appetisers and top out at 390 baht for some of the seafood selections, with most mains fetching around 150. With tax and a 10% service charge (added to the bill automatically), we paid 470 baht for the two dishes, rice and a bottled water — not cheap but worth it for the quality of food and riverside setting.

The owners have a second location, Steve Cafe and Cuisine In Town, located off Phahon Yothin Road near Ari BTS station.

Travel info:
Steve is visible from Thewet pier, but its location on the other side of a canal makes it a little tricky to reach. Walk straight away from the pier and take a left over the first public footbridge spanning the canal (you might pop into Thewet market while here). Take an immediate left on the other side along the narrow footpath next to the canal. As you approach the water gate, hang a right into another narrow lane and follow it to the gates of Wat Thewarat Kunchon. Enter the temple grounds, taking the first left in front of the Golden Teak Museum, and continue on another lane towards the river, where you’ll see the sign for Steve on the left. If coming from Samsen Road, head west on Sri-Ayutthaya Road, passing the National Library and into the temple grounds from the north.

Great food in an old-style setting