Like many of Bangkok’s most beloved restaurants, Krua Apsorn‘s nonchalant blue-and-white frontage doesn’t beg for attention. With a great reputation built on carefully prepared central Thai comfort food that was favoured by King Bhumibol’s late mother, this Banglamphu mainstay has no need to boast. 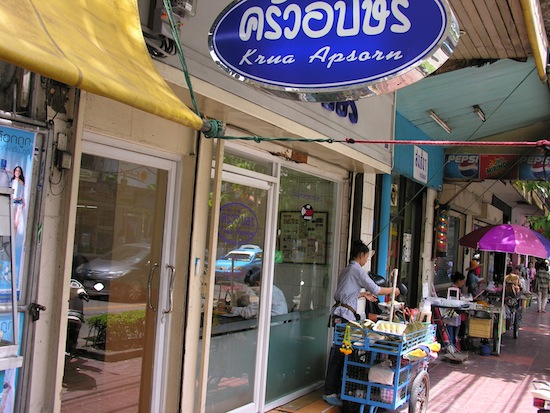 They serve dessert, but no shortage of sweets are found on the street.

The original Krua Apsorn is located just north of the National Library off Samsen Road, but their larger branch on Dinso Road, just south of Democracy Monument, is easier to find. Blending into street carts and cosy food shops on this short avenue that’s loaded with food, the restaurant appears small from outside. Tucked behind the original dining room, lunch-breaking city hall office workers join Khao San Road backpackers in the larger, airier dining space set between wall-size windows. Air-conditioning adds to a comfy, casual atmosphere that makes you want to linger after the dishes have been cleared.

The single page laminated menu includes pictures of all 30 available dishes to go with brief Thai and English descriptions. It also spotlights Krua Apsorn’s 2009 mention by The Observer as the best place in the world to eat Thai curry. That takes it a wee bit too far, but there’s no doubt that this is an easy place for travellers to enjoy a good, authentic Thai meal, and the location makes it a worthy spot for a midday break from sightseeing. A favourite of grandmothers, backpackers and city hall suits.

With so many Thai restaurants offering menus that land on the table with the weight of a doctoral thesis, Krua Apsorn’s limited selection is refreshing. The focus is on central Thai ahaan jut, which translates as “bland food” but could perhaps be more accurately termed “comfort food”. Hearty dishes of generous crab meat mixed with yellow curry and egg or yellow chillies and green beans are a house specialty, though the 360 baht price tags on these will deter some. Thankfully for anyone on a budget, most dishes run in the neighbourhood of 100 baht.

Owner and head chef Aunt Dang’s obsessive attention to detail has made her something of a legend in the Bangkok food scene. Unlike fiery northeastern and southern Thai dishes that often require a certain threshold for pain, this is the sort of food that smells like how we imagine a soft lullaby would, and settles into the stomach the way a baby goose might nuzzle into its mama’s roost. A perfect example is the stir-fried sour pork with egg, or muu khem kai, a sort of pan-tossed scramble that combines the subtle tones of egg and various onions with generous hunks of central Thai sour sausage. 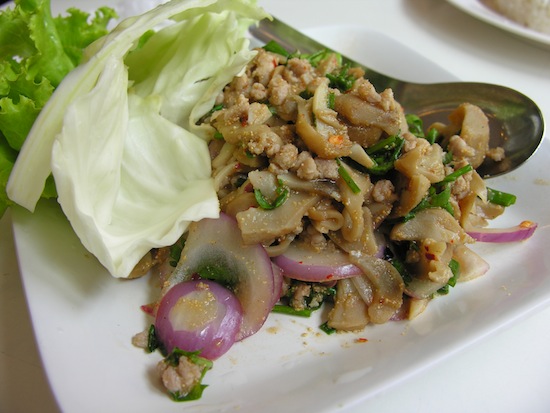 Even dishes that you would expect to at least make the nose run are often on the mild side. The well-balanced laap-style mushroom and chopped pork salad tastes as though it was prepared by a countryside grandmother careful not to overpower her grandkids’ tongues.

One exception to the mild rule is the stir-fried mussels with basil, or hoi malang pad chaa, another of Krua Apsorn’s best known offerings. Tossed with plentiful red chillies, basil, krachai (wild ginger), fresh peppercorn and lemongrass, the mussels exemplify Aunt Dang’s dedication to using only exceptional ingredients. The sharp flavours are contrasted by melt-in-the-mouth Asian mussels that always look like they’ve been training for some sort of aquatic mussel sumo wrestling squad. Plump and juicy. 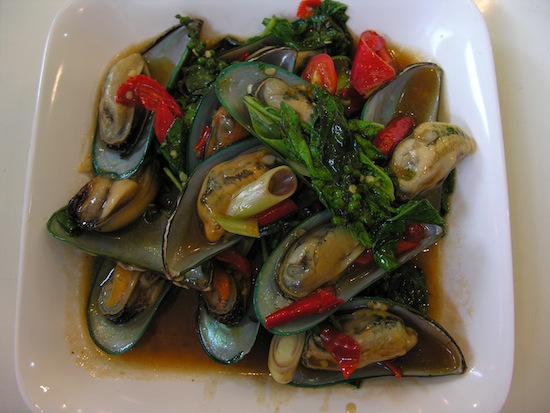 While Krua Apsorn churns out consistently irresistible food, the service is a different story. Food orders tend to come out quick, often before the rice, but it’s typically necessary to ask two or three times before drink orders are served. The young orange-clad servers’ customary reaction to our blatant hand waving in hopes of receiving a bill seems to be to hide in the front room and hope that the food runner sorts it out. The haphazard service isn’t a deal-breaker, but we wouldn’t mind if Aung Dang extended her meticulous wrath to the front-of-house.

Krua Apsorn is more of a brunch or lunch spot. For a more upscale scene with similarly tasty central Thai food made from scratch, Methavalai Sorndaeng is around the corner, and cheap vegetarian goodness can be scored across the street at Arawy.