Thailand's northeastern region — better known as Isaan — produces what we find to be the most addictive food in the kingdom. If you’re in Bangkok’s historic Rattanakosin district and get hit with an Isaan food craving, Bunthon Restaurant serves the real deal. 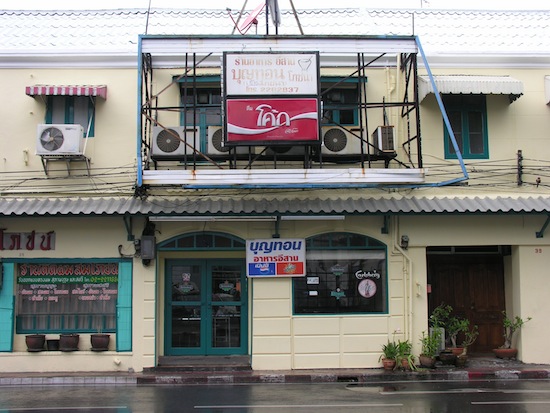 Judging by the sign out front that’s so faded you can hardly make out the letters, we guessed the shop was at least 30 years old — and we were wrong. It’s been running strong for 40 years with a head chef who hails from Si Saket at the helm since day one.

The focus here is on food, not ambiance. A dark, drab interior reminded us of a mess hall deep in the belly of a giant cargo ship, although the playfully arguing staff and TV tuned into Thai cartoons added some Bangkok “charm”. The room was fan-cooled but we did see an old air-con unit, possibly awaiting repair. We arrived during a rain storm at 14:00 to find the place empty. It apparently fills up around noon and for dinner. Although major tourist sites like the Grand Palace and Wat Pho are a five-minute walk away, Bunthon draws an almost exclusively Thai clientele. The atmosphere might leave something to be desired, but honestly, stylish just doesn’t go with real, not-messing-around Isaan fare. While all the roadside favourites like Isaan-style som tam (green papaya salad), gai yang (grilled chicken) and sai krok (Isaan sausage with peanuts, red onion, chilli and lime) are available, Bunthon has some specialties that you won’t find at the average street cart.

The featured item is nam tok pla chan tort, a whole fried snakehead fish doused in nam tok, an addictive sour, spicy and salty sauce with crushed toasted rice, red onion and mint leaves. That one goes for a lofty 400 baht — expensive in a way that dares you to try it. Another house specialty that caught our eye was yam pla duk foo, a spicy salad of catfish, strips of sour green mango, mint, peanut and chilli. One of the best tests of an Isaan chef’s skill is laap, an often painfully spicy mix of chopped meat, roasted chillies, mint leaves, toasted rice, green and red onions, lime juice, fish sauce and whatever else the chef has up their sleeves. We went for the duck version — laap ped. It’s everywhere in Ubon Ratchathani but not always readily available in Bangkok. The portion was huge, the duck was tender and the flavours precisely balanced. Score one for Si Saket.

Rather than go for the classic northeastern version of som tam buu pla-raa, we tried one with the addition of grilled pork neck (khor muu yang). With more sweetness than we expected and the addition of peanuts, it reminded us more of a classic central Thai som tam, but true-to-Isaan heat was provided compliments of several whole red chillies. The sweetness wasn’t overpowering, and it actually did well to offset the strong sour and salty tastes of the laap. Som tam with pork neck — a first for us.

It seems that 40 years of mortal-and-pestle life pays off — both dishes were very tasty and we’ll be back to try some of the specialties. With average prices around 70 baht and portions far larger than your average Isaan food stall, this is a good choice for groups on a budget. If you’re dining solo, a single salad and basket of sticky rice is enough to fill up, most for under 100 baht. The restaurant also serves cold beer and Scotch whiskey by the bottle.

Bunthon Restaurant takes its name from Phraeng Phuthon Square, which is just around the corner. The restaurant has no English signs and is easy to miss — look for Carlsberg and Heineken stickers on the dark tinted front window. Go out of the restaurant and walk immediately to the left then take your next left down the first alley, and you’ll find yourself at a shop that serves what’s probably the best ice cream in Bangkok — perfect after those fiery salads.